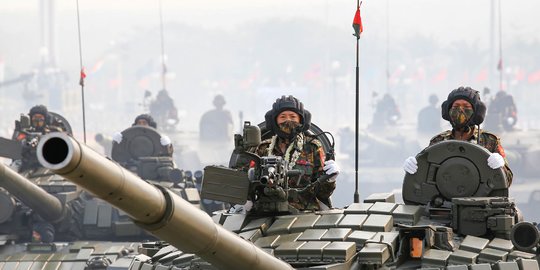 Merdeka.com – As many as 10 Myanmar rebel groups granted enclosure for the anti-coup movement on Saturday, fueling fears of a wider conflict will emerge in a country that has long been wracked by conflict between the military and armed ethnic groups.

Myanmar has been in turmoil since the military toppled civilian leader Aung Saun Suu Kyi on February 1, sparking an uprising that the junta crushed in lethal action. According to the monitoring group, more than 550 people have been killed, angering dozens of rebel groups and their militias, which control territory across the country’s borders.

On Saturday, 10 rebel groups met virtually to discuss the situation in Myanmar, denouncing the junta’s use of live ammunition against protesters.

“The leaders of the military council must be held accountable,” said the leader of the Shan State Restoration rebel group, General Yawd Serk, reported by Channel News Asia, Sunday (4/4).

Last week, the junta announced a month-long ceasefire with armed ethnic groups, with the exception of “security and government administration violated”. The announcement did not cover a deadly halt to anti-coup demonstrations.

According to Yawd Serk, the ceasefire requires security forces to cease all acts of violence, including against the protesters.

But distrust is creeping into Myanmar’s ethnic minority, and Yawd Serk said 10 signatories to the national ceasefire will “review” the deal.

“I want to state that (10 groups) firmly support those who demand an end to the dictatorship,” he stressed.

Last week, the UN special envoy to Myanmar warned the Security Council about the risk of civil war and imminent “bloodshed”.

The rebel group meeting comes a week after the Karen National Union (KNU), seized a military base in eastern Karen state, killing 10 military officers. The junta responded with air strikes.

The KNU has been a vocal opponent of the military junta and says it protects hundreds of anti-coup activists.

On Saturday, the group condemned the military for “using excessive force by carrying out relentless bombings and air strikes” from March 27 to 30, which “resulted in the death of many people including children”.

Junta spokesman Zaw Min Tun said the military was only targeting the KNU 5th Brigade – leading to a seizure of the military base.

“We carried out airstrikes only that day,” he told AFP.

“We have signed a national ceasefire agreement. If they follow the NCA, there is no reason for conflict.”

Local media and ethnic Karen rights groups have reported on several bombings and airstrikes across the state over the past few days. [pan]

See also  In this Dutch seat of fire, they do not care about ...