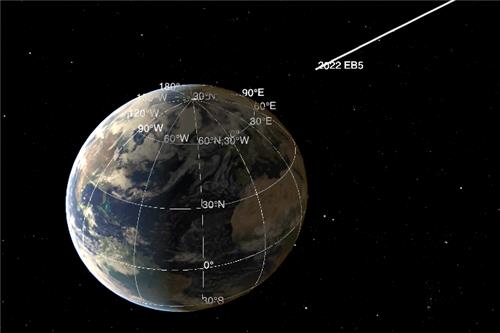 (Seoul = Yonhap News) Reporter Nam-seok Eom = At ​​10:23 pm on the 11th, an asteroid about 2m in size collided with the atmosphere and disappeared in the sky southwest of the Norwegian volcanic island of Jan Mayen in the Arctic Ocean.

Collisions of these small asteroids, which do not pass through Earth’s atmosphere and disappear, are common and go unnoticed, but this asteroid, dubbed ‘2022 EB5’, appears to be a little more special.

This is because it is the fifth asteroid to accurately determine the location and timing of the impact by identifying its orbit before impacting the Earth.

According to the National Aeronautics and Space Administration (NASA) on the 16th, 2022 EB5 was first identified at the ‘Fiskesteteu Observatory’ in northern Hungary two hours before the collision and notified to the International Astronomical Union (IAU) Asteroid Center (MPC), and immediately the MPC’s near-Earth astronomical object added to the list of additional observations.

NASA’s asteroid impact risk assessment system ‘Scout’, designed to automatically search the MPC list, calculated an orbit based on initial observation data, and as a result, it was confirmed that it would collide with the Earth’s atmosphere. CNEOS) and other related organizations were urgently notified and additional observations were made.

Scouts initially predicted that they would collide over western Greenland, but as additional observations were made, they changed the location of the collision to over the Norwegian coast. did.

2022 EB5 was too small to form a spark or blast that could be seen from the ground at the time of the atmospheric impact, but infrasound confirmed that it collided at the location and time predicted by the scouts.

Based on the data observed as it approached Earth and the energy measured by infrasound, 2022 EB5 was found to be a small asteroid less than about 2 meters tall.

Asteroids of this size are not bright enough to be seen until close to Earth.

“There are countless asteroids as small as 2022 EB5,” said Paul Cordas, director of CNEOS. It can only be detected when it falls, so only a small fraction of it is found and observed before the collision,” he explained.

The first observation of an asteroid before it impacted Earth was 2008 TC3, which struck over Sudan in October 2008. The asteroid, about 4 meters wide, crashed into the atmosphere and shattered into hundreds of small meteorites that fell into the Nubian Desert.

2022 EB5 is the fifth asteroid observed before impact, but it is expected to increase as observation technology for near-Earth objects develops.

Although the 2022 EB5 failed to reach the ground due to its small size and disappeared, it helped train Earth-defense training and provided an opportunity to confirm the reliability of the asteroid impact risk assessment system, NASA said.