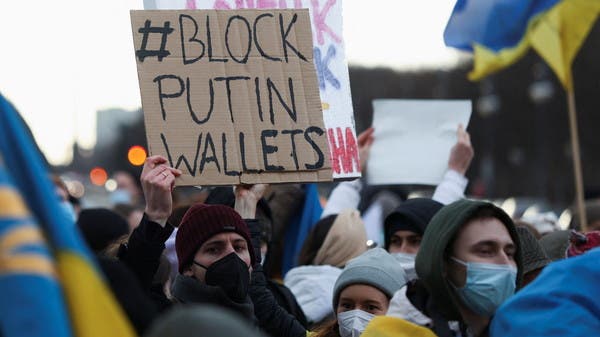 A possible invasion of Ukraine by neighboring Russia could resonate with a number of markets around the world, from wheat prices, energy and sovereign dollar bonds to safe assets and stock exchanges.

Here are five themes that explain where the potential escalation of tensions across global markets can be felt, as reported by Reuters:

A high risk usually sees investors return to bonds, generally viewed as the safest asset, and this time may be no different, even if the Russian invasion of Ukraine risks further fueling oil prices, and thus inflation.

Multi-decade inflation and impending interest rate hikes are off to a good start to the year for bond markets, with US 10-year rates still hovering near the key 2% level, and German 10-year bond yields above 0% for the first time. Since 2019

Gold, which is also seen as a haven in times of conflict or economic crisis, is clinging to 13-month highs.

Any interruption in the flow of grain from the Black Sea region is likely to have a significant impact on prices, which will add to food price inflation at a time when affordability is a major concern worldwide after the economic damage caused by the COVID-19 pandemic.

Four major exporting countries – Ukraine, Russia, Kazakhstan and Romania – ship grain from Black Sea ports, which could face disruptions due to any military action or sanctions.

Energy markets are likely to be affected if tensions turn into conflict. Europe depends on Russia for about 35% of its natural gas needs, most of which comes through pipelines that cross Belarus and Poland to Germany, Nord Stream 1 that goes directly to Germany, and another pipeline through Ukraine.

In 2020, gas volumes from Russia to Europe slipped after lockdowns dampened demand, and did not fully recover last year when consumption soared, driving prices to record levels.

As part of potential sanctions if Russia invades Ukraine, Germany has said it may stop the new “Nord Stream 2” gas pipeline from Russia. The pipeline is expected to increase gas imports to Europe, but also deepen its energy dependence on Moscow.

Analysts expect natural gas exports from Russia to Western Europe to drop significantly through Ukraine and Belarus in the event of sanctions.

Oil markets can also be affected by restrictions or disruption. Ukraine transports Russian oil to Slovakia, Hungary and the Czech Republic.

JP Morgan said the tensions threaten to trigger a “measurable rise” in oil prices, noting that a rise to $150 a barrel would reduce global GDP growth to just 0.9% year-on-year in the first half of the year, while inflation more than doubled. to 7.2%.

Listed Western companies could also feel the consequences of the Russian invasion, although any blow to energy companies’ revenues or profits could be offset to some extent by a potential jump in oil prices.

BP owns a 19.75% stake in Rosneft, which makes up a third of its production, and also has a number of joint ventures with Russia’s largest oil producer.

Shell owns a 27.5% stake in Russia’s first LNG plant, Sakhalin 2, which accounts for a third of the country’s total LNG exports, as well as a number of joint ventures with state-owned energy giant Gazprom.

On the other hand, US energy company Exxon operates through its subsidiary, the Sakhalin 1 oil and gas project, in which the Indian Oil and Natural Gas Company (ONGC) also holds a stake. Norway’s Equinor is also active in the country.

As for the financial sector, the risks are concentrated in Europe. Austrian international Raiffeisen bank got 39% of its estimated net profit last year from its Russian subsidiary, along with Hungarian OTP and UniCredit, which earn about 7% from Russia, while Societe Generale generates 6% of the group’s net profit through activities Retail at Rosbank.

Dutch financial company ING also has a footprint in Russia, although that accounts for less than 1% of net profit, according to JPMorgan’s calculations.

Looking at the exposure of loans to Russia, French and Austrian banks have the largest exposure among Western lenders at $24.2 billion and $17.2 billion, respectively. It is followed by US lenders with $16 billion, Japanese with $9.6 billion, and German banks with $8.8 billion, according to data from the Bank for International Settlements (BIS).

Other sectors are also at risk: the carmaker Renault, which makes 8% of its EBIT in Russia. And the 93 Russian stores of Germany’s Metro AG make just under 10% of their sales and 17% of their base profit.

Russian and Ukrainian assets will be at the forefront of any market repercussions from potential military action.

Both countries’ dollar bonds have underperformed in recent months, as investors scaled back their exposure amid escalating tensions between Washington and its allies and Moscow.

While Russia’s overall standing in the capital markets has shrunk in recent years amid sanctions and geopolitical tensions, this somewhat mitigates any threat of contagion through those channels.

However, the Ukrainian and Russian currencies have suffered, with the hryvnia being the worst performing currency in emerging markets for the year so far, while the ruble is ranked fifth.

“The events of late 2014 remind us of the liquidity gaps and hoarding of the US dollar, which led to a significant depreciation of the ruble at that time,” he added.

Volkswagen e-Up! is back, the sister Skoda will not return

If Russia attacks Ukraine, this is how China will get support