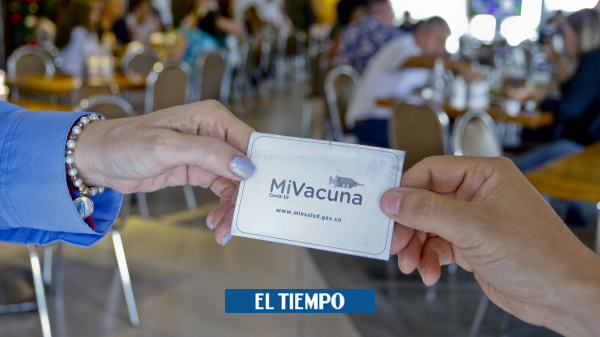 Most Colombians agree that the covid-19 vaccine is mandatory and that the vaccination card in public places, as revealed by a survey conducted and funded by Invamer SAS and known in the last hours.

The measurement was carried out between December 20 and January 3 and considered different aspects, such as optimism and citizen perception regarding problems such as drug trafficking, corruption and insecurity in the country.

(Also read: Several candidates fell in favorable opinion, according to a survey).

1,200 Colombians surveyed, 71 percent indicated they agree with the request for the vaccination card against covid-19 to enter certain public places such as restaurants, concerts, stadiums, among others. For their part, 28 percent said they disagreed.

It should be remembered that since last December 14, the country began to require the vaccination card with the complete scheme for entering public establishments.

On the other hand, 65 percent of the individuals in the sample claimed to be in favor of the coronavirus vaccine being obligatory In colombia; while the other 35 percent said they disagree with this imposition.

These figures coincide to some extent with the number of Colombians who have been vaccinated in the country. According to the Government, currently 75 percent of the population has applied at least one dose of the vaccine.

On the other hand, according to figures from the Ministry of Health, more than 28 million 741 thousand Colombians have a full scheme vaccination and more than 3,600,000 have received a third booster dose.

(It may interest you: ‘It’s stupid and stupid’: Duque attacks the anti-vaccines).

President Ivan duque has assured that the only way to face the fourth peak of the pandemic, generated largely by the contagious omicron variant, is through vaccination.

For this reason, one of the immediate goals of the Government – which has ensured that the country must be prepared for some 40 thousand infections a day – is that 80 percent of the population is vaccinated with the complete scheme of biologicals against the covid- 19.

(We recommend reading: ‘You have to be prepared for 40 thousand infections a day’: Duque).

COMPANY THAT CARRIED OUT THE SURVEY: INVAMER SAS NATURAL OR LEGAL PERSON WHO ENGAGED IT: INVAMER SAS, for sale by subscription. SOURCE OF FINANCING: INVAMER SAS’s own resources OBJECTIVES: to measure the approval of the President and the favorability of characters and institutions in Colombia. Know the public opinion on current events. Evaluate the opinion of the general public in Colombia and of President Iván Duque Márquez. Measure the concept of people facing current Colombian problems. Observe the level of acceptance of people regarding laws, proposals or statements of the moment. Carry out a general evaluation in the main cities of the country on the work of the respective mayor and the way people are perceiving their city. UNIVERSE: men and women aged 18 or over, of all socioeconomic levels, residing in: Bogotá (5,479,011), Medellín (1,813,155), Cali (1,374,126), Barranquilla (810,019) and
Bucaramanga (390,351), for a total of 9,866,662 people, according to the 2018 Census.
SAMPLE FRAME: cartography of cities to select people. The cartography covers in the 5 big cities is 95%. The number of blocks in the cartography are: Bogotá, 39,103; Medellin, 13,329; Cali, 13,707; Barranquilla, 7,783 and Bucaramanga, 4,716, for a total of 78,638. SAMPLE SIZE AND DISTRIBUTION: 1,200 personal surveys distributed as follows: Bogotá, 400 surveys; Medellín, 200 surveys; Cali, 200 surveys; Barranquilla, 200 surveys and Bucaramanga, 200 surveys. To adjust the total sample to the actual size of the universe for each city, weights are applied. SAMPLING SYSTEM: a probability sampling was carried out in stages, first a systematic random selection of households was carried out and later a simple random selection of a person aged 18 years or older. MARGIN OF ERROR: the margins of error within 95% confidence limits are: for the total sample of the 5 cities +/- 2.83%; for the total sample from Bogotá +/- 4.90%; for the totals of the samples from Medellín, Cali, Barranquilla and Bucaramanga
+/- 6.93%. DATA COLLECTION TECHNIQUE: computer-assisted telephone surveys (CATI) and personal home surveys of respondents (CAPI). DATA COLLECTION DATE: from December 20, 2021 to January 3, 2022. NUMBER OF INTERVIEWERS: 45.
VALIDATION METHOD: 100% of the surveys carried out were reviewed and 15% of them were supervised. TOPICS TO WHICH IT REFERS: public opinion on rulers, characters, institutions and current events. CHARACTERS OR INSTITUTIONS BY WHICH IT WAS INQUIRED: refer to the questionnaire. SPECIFIC QUESTIONS ASKED: refer to the questionnaire. WEIGHTING FACTOR: is the figure that, acting as a multiplier, allows the sample data to be brought to the population, that is, to expand the sample. The weighting factor was calculated dividing the percentage of the universe of variables, age range and socioeconomic level, over the percentage of the sample for them.
variables. The weighting factor indicates the number of sample units that each respondent represents to be proportional or representative of the universe.
The universe used in this weighting factor was taken from the results of the 2018 National Population and Housing Census.

(Read on: ‘Alias’ Otoniel ‘is seeking to obstruct his extradition’ – Duque).

Nightly checks at eleven addresses after an explosion in Turnhout, Berchemse testifies: “Fortunately, our gas stove was in order” (Berchem)

Latvian handball players give way to Lithuania in training