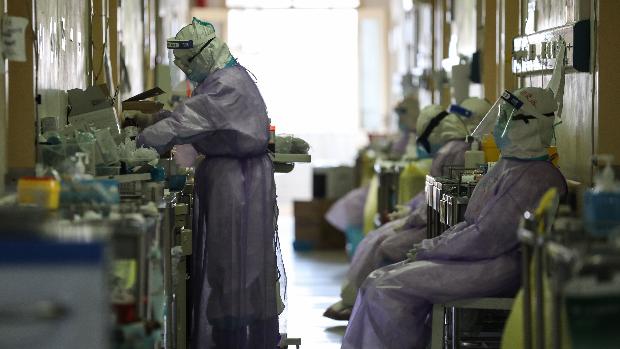 Li Liang, a 36-year-old man was admitted on February 12 in one of the hospitals built in the Chinese city of Wuhan to treat patients with mild and moderate symptoms of the coronavirus. Cured at two weeks, he was discharged with an order to stay another 14 days in quarantine in a hotel. But, after two days, he began to feel bad again because he had a dry mouth and gas in his stomach. Last Monday he was sent back to the hospital, where he died that afternoon from respiratory failure.

His case, published by The Paper and collected by the “South China Morning Post” newspaper, shows that the coronavirus not only kills the elderly and the sick, as it is said to downplay it, but even patients who had supposedly overcome the disease, baptized as Covid-19. Adding even more concern to the rapid spread of the epidemic worldwide, one of the centers enabled in Wuhan To attend to patients, he has alerted the increase in recovered patients who have been readmitted again after relapse again. According to The Paper, the center, Fangcang Hospital, will begin testing this Thursday for antibodies to patients discharged to ensure they are fully recovered.

After the detection of cases in China and Japan, experts are concerned about this proliferation of cured patients who continue to show the coronavirus in subsequent check-ups. Under a study in the province of Guangzhou (Guangdong), south of China and bordering with Hong Kong, up to 14 percent of patients discharged again tested positive in coronavirus tests during their recovery period. Although their viral load is small and the authorities do not yet know if they can continue to spread the disease, they are prescribed another two weeks of quarantine to continue their evolution. Now, the death of Li Liang opens new questions about a coronavirus that is still very little known and, worse, could mutate to survive the containment and mitigation measures that are being launched against him across the planet .

Especially in China, where the epidemic began in December and exploded in January. In this country the results begin to be seen after a month and a half of draconian quarantines, movement restrictions and strict controls, the only measures that have been proven effective in combating the disease according to the World Health Organization (WHO). In its count of the previous day, the National Health Commission has announced on Thursday 139 new cases, twenty more than there were on Tuesday. Of these, 134 were in Hubei Province, with 131 in its capital, Wuhan, epicenter of the epidemic. With only five cases detected in the rest of China, the official figures – which must always be taken with caution in this country – indicate enormous success in the “total war” against the coronavirus. Even so, 31 deaths were counted on Wednesday, which means that the fight is not over yet.

While China tries to regain normalcy outside the epicenter of Hubei, still in quarantine, South Korea is beating itself thoroughly against the epidemic. With almost 6,000 infected and 35 dead, it is the second largest focus after China, which is concentrated in the southeast of the country and with more than half of the cases linked to the mass masses of the Shincheonji Christian sect. On red alert and working 24 hours a day, the authorities have decreed this Thursday a third «special attention area», The city of Gyeongsan, adjacent to the other two that had already received this consideration: Taegu and Cheongdo. Concentrated in these locations and in the province of North Gyeongsang, the virus is spreading to that of the South, which has gone from nine cases to 74, and to other areas of the country. In Seoul, the capital with more than ten million inhabitants, it has already exceeded a hundred people infected despite the efforts of the Government, which considers the next two crucial weeks to contain the disease.

In addition to carrying out about 10,000 daily tests and having more than 35,000 people in quarantine, it prepares an isolation center with 2,000 beds to relieve hospitals in the most punished, already overflowed areas. Together with these mitigation measures, South Korea is influencing prevention with a campaign promoting the «social distance»In order to avoid crowds and reduce public life only to the indispensable, remaining at home the rest of the time to stop the disease. The authorities have canceled events and, like Japan and Hong Kong, have closed schools until April hoping to beat the damn coronavirus this month.