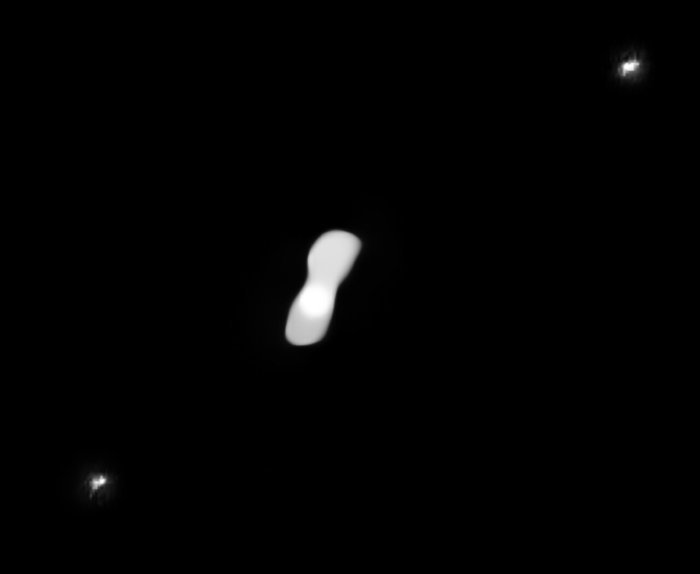 Tuesday, September 14, 2021 at 06:07 AM – Detailed images of a dog bone-shaped asteroid have been released by the European Southern Observatory. This celestial body, in addition to its unusual form, has two moons.

The European Southern Observatory provided very detailed images of an asteroid named Cleopatra. This large object, 270 kilometers long, is unique in that it has the shape of a dog bone. In 2008, scientists discovered that the object had two moons. Its natural satellites were named three years later: AlexHélios and CleoSelene. The celestial body orbits the Sun between Mars and Jupiter, in the asteroid belt. Cleopatra, a less dense object than previously estimated, is believed to be mostly made of porous metals. According to scientists, the presence of the two moons could be explained by the ejection of materials from the asteroid which is subjected to a relatively rapid rotation. Cleopatra rotates every 5.3 hours. This image shows its movement for a period of approximately six hours. It was taken between 2017 and 2019. Thus, the mass and density of the object suggest that it would be near a breaking point due to the centrifugal force that is exerted against it.