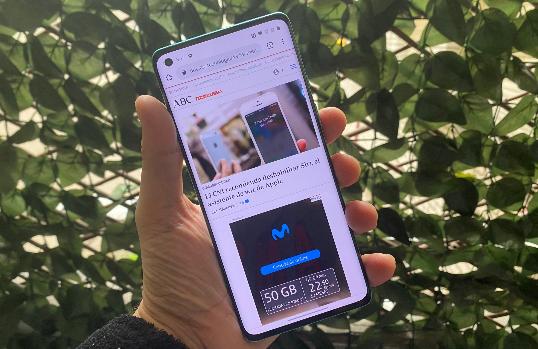 OnePlus’s track record in the mobile phone market is commendable. The Chinese firm, during its first proposals, opted for a single model that was committed to an attractive formula and already assimilated by consumers: offering great benefits at more affordable prices. The strategy was expanded until two different models appeared. One powered by the “Pro” category which makes it a winning horse thanks to some technical improvements. Now, go to the same idea with the renewal of your devices: the OnePlus 8 and OnePlus 8 Pro. Both are compatible with the new fifth generation mobile networks, the famous 5G.

The “normal” version, that is, the OnePlus 8, is the more balanced of the two. The most complete, if possible, in the compendium of high characteristics that compiles the terminal, which shares some (part of its guts) – with its older brother. At first glance, it is practically identical to the previous model, the 7T, but it has migrated from the skin and significant improvements have been added, such as the “brain” that moves its entire ecosystem: a powerful Snapdragon 865 microchip that is marked with two configurations of 8 and 12 GB of RAM. His behavior is barely curtailed and fluid is a joy which is how we have verified during the tests carried out by this newspaper in recent days.

With a sensational screen 6.55 inch, the terminal is very compact as a whole. It handles quite well with one hand unlike other existing models on the market like Samsung Galaxy S20 Ultra, whose size is quite monstrous. In this case, the mamotreto is manageable (weighs only 180 grams), even stored in the pants pocket. An important detail to keep in mind is that all artificial remnants on its touch surface have been removed. It has no “notch,” that controversial tab that has become very popular in the industry in recent years. Now there is no trace. To include the front camera, a “hole” has been made, which is left to the left discreetly.

The chosen panel maintains the standards offered on previous occasions with one of the Amoled type, well balanced and with good color reproduction despite offering a Full HD resolution (2,400 x 1,080 pixels) that is somewhat more corseted. With a 20: 9 aspect ratio, the “smartphone” fits most multimedia content. Features slightly curved edges inspired by Samsung’s Galaxy terminals although in this case it is somewhat wasted as interactive spaces for a submenu. This fluidity in its handling is also appreciated thanks to the 90 Hz refresh rate, which adapts to the type of content offered, making it sometimes difficult to distinguish it.

Where some modifications have been made is in its photographic power. The terminal includes a triple rear camera in the form of a traffic light with three differentiated lenses and, again, located in the center. The proposal is gimmicky and correct, without too many pretensions. One, the main one, which contains a 48 megapixel sensor. The zoom has now passed to this lens and, unlike other proposals, it works digitally at all times.

It has not taken an important step in this matter, but instead, progress has been made in Artificial Intelligence algorithms to achieve better results than the previous model. It combines with an ultra wide angle of 16 megapixels very versatile to add more information and finally the novelty: a macro camera (2 megapixels) to capture details and that replaces a telephoto lens. In general, it is supported by the same frame of mind as the whole mobile as a whole: it is balanced. Doubts may exist in that macro lens and its capabilities somewhat upgradeable. Is it going to be used a lot? Time will tell.

In video recording, a hybrid stabilization system (optical and digital) has been used. A function designed for those users who create multimedia content and are looking for a product that achieves better results. Although it is trimmed by default, the software allows recording in 4K quality at a rate of 60 frames per second. As for its protection measures, the OnePlus relies on its safe to various technologies already established in the market such as the fingerprint sensor (similar to the previous model) and a facial recognition sensor. Both work consistently, although somewhat below speed and precision than other rivals.

Without a headphone jack and supported by a USB-C connector, one of its strengths is the battery. Here there has been a big push. And you can see it. It goes from a 3,600 mAh to a 4,300 mAh. In just over fifty minutes it has been fully charged thanks to its powerful charger and, in addition, it is compatible with wireless chargers (although it is not included). Aesthetically beautiful, with matte finishes, but without being disruptive, they come in various colors (black, emerald green with sparkling effects a version called “interstellar” inspired by the rainbow). Although they may be a little slippery, it is easily corrected with the company’s policy of including a cover. The price, on the other hand, has been a surprise, although somewhat disconcerting when leaving from the 709 euros (one hundred euros more in the superior version of 12 GB of RAM).

Man spits on food in supermarket

Music and Conscious Generation of April 14, 2020