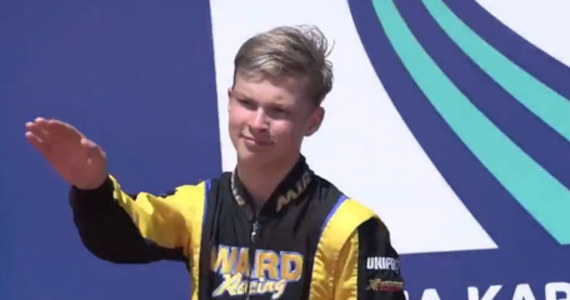 A scandal at the awards ceremony of the European karting championship. The 15-year-old winner, Artiom Seweriuchin, a Russian representing Italy, gave a Roman salute, a gesture of fascist salute.

The footage of the ceremony, which took place on Sunday in the Portuguese city of Portimão, is spreading rapidly on social media.

You can see on it Artiom Severiuchin, a Russian who, despite the sanctions, could take part in the competition because he has an Italian passport.

Standing on the podium, the 15-year-old first punched his chest twice and then straightened his arm in a fascist salute. Later on the video you can see him laughing. The Italian national anthem is played in the background.

The Roman salute, used by Mussolini’s fascists, has been banned in Italy since 1952, as is the Nazi salute.

The Fédération Internationale de l’Automobile (FIA) has not yet made a decision on Severiukhin, but has announced that it will investigate the matter.

The Russian drives for the Swedish team Ward Racing. This one has already terminated cooperation with him. “This is terrible. We are ashamed of it,” said Joakim Ward.

In Australia – a triple triumph for the Ferrari pilot