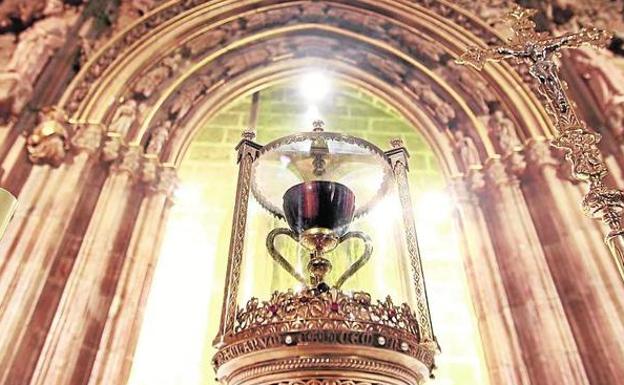 Is that of Valencia the Holy Chalice of the Last Supper? The research of Gabriel Songel, Professor of Design of the Polytechnic University of Valencia (UPV), does not allow to answer with certainty to this question. But yes sheds more light on the relic which is venerated in the cathedral of Valencia and allows to verify that since its existence is documented it was treated as such with a clear effort to enhance what it meant.

The book ‘The revealed chalice’, published by Tirant Humanidades, gathers the main conclusions of Songel’s research that allow advance in 300 years the first reference of the relic. For the professor his findings “confirm that the Chalice was in Aragon in the Middle Ages, at least in the eleventh century, and confirm data that appear in the oral tradition of San Lorenzo,” which “it makes it more likely that the Chalice of Valencia is the authentic»Of the Last Supper.

As the author himself said on Monday in the presentation of the book in the cathedral of Valencia, an acrostic in the manuscript detailing the content of the Reliquary of San Juan de la Peña allows us to conclude that It was mounted before the fourteenth century, contrary to what was thought so far. The date is thus advanced until a time close to the thousand year. This is the oldest reference referred to the Holy Chalice.

The research analyzes the brands of medieval flower beds from the city of Valencia and from there comes another of Songel’s contributions. The professor of the UPV has confirmed that it was carried out according to one of these patterns. More surprising, according to Songel, was to discover that the inscription found at the base of the chalice It also responds to one of these patterns found in medieval Valencia.

The deepening of these symbols has allowed to give a unitary sense and a clearer explanation of the whole. Songel’s work has also discovered the similarity of the coin minted by the Aragonese king Sancho Ramírez with the structure of the chalice, since both use Jesse’s trunk psalm.

Progress has also been made in identifying the author of the inscription that is at the base of the relic that could mean «Jesus is God». That is why the author should know Arabic and Hebrew, have access to the chalice and be someone close to the kings of Aragon and the monks of San Juan. Songel considers that Pedro Alfonso, a Rabbi convert from Oscense, meets these characteristics.

«What is clear and no one has been able to refute so far is that the Chalice of Valencia is a agate stone that is only grown in Palestine and carved in a very special way around which corresponds to the first century of our time, ”he said. The other chalices that claimed to be the one used by Jesus Christ, “have been falling because they have not passed that archaeological filter, or were much later or had another purpose.”

“Affects one in a million.” .. Former Mubarak’s doctor: He suffered from a rare disease before 2011 – Masrawy- Masrawy