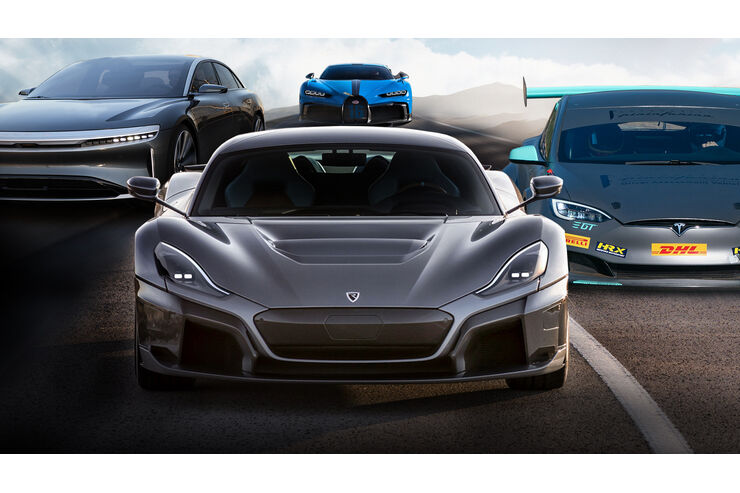 Company founder Mate Rimac has set a strong record with a pre-series model of his electric hypercar, which is by no means finished. Bugatti, Lucid and Tesla are left behind for the time being.

While the top speed record hunt for the 300 mph crown is still going on, the next exchange of blows is already underway. Various electric car manufacturers are currently raging on the quarter mile. Most recently, e-car pioneer Mate Rimac, who punched a time of 8.94 seconds into the asphalt of an abandoned Croatian airfield with a C-Two prototype. Unofficially, of course, no one from the Guinness Committee or the international motorsport authority FIA was present. Still, the value is more than impressive.

The Californian e-car startup Lucid had previously demonstrated the relentless acceleration capabilities of its Air. Originally, its boss Peter Rawlinson promised a quarter mile time of 9.9 seconds for the electric luxury sedan. Even this value is shockingly good in comparison: a 1,500 hp Bugatti Chiron (base model) takes just as long. At around 3.15 million euros, the Chiron costs almost 22 times as much as a Lucid Air in the Dream Edition (currently around 143,582 euros).

When Lucid put his announcement into action and sent the Air in a three-engine version for the quarter mile, Rawlinson’s troop truly followed suit: The result was an absurdly good time of 9.245 seconds – better than a Dodge Challenger SRT Demon (9.6 seconds), a Koenigsegg Jesko (9.5 seconds) or a Donkervoort D8 RS06 (9.3 seconds). However, the Air record-breaking vehicle was an empty model that was specially designed for the quarter mile. The Rimac, on the other hand, did not even compete with full power, and there is still a lot of room for improvement in terms of tires, route selection and things like that. It is therefore quite possible that the best value of the 1,774 hp SSC Tuatara (8.8 seconds) will soon be due.

Lucid posted a video on Twitter of the Air’s 9.245-second trip on the quarter mile.

Either way, professional announcer Elon Musk is now under pressure. On the last Battery Day, the Tesla boss promised a quarter mile time of 9.0 seconds for the Model S Plaid, the new top model in the series. According to Musk, the Model S Plaid should use it to sink everything that has wheels. But with his side record, Mate Rimac ensured that this time would no longer be enough for a record. Maybe the Lucid Air will be enough, and there is a special piquancy in this duel: Lucid boss Rawlinson is his former Model S development boss. The two broke up in an argument and are still enemies to this day.

The company bosses strive for records

Electric mobility is primarily about environmental protection and sustainability. But also about a performance with which combustion engine models can hardly keep up. The reasons for this also lie with the protagonists: Elon Musk is a man who also greatly valued the old world of internal combustion engine sports cars – and who raved about his McLaren F1 extensively. Eco-thinking in the form of renunciation is alien to him: It was not for nothing that he liked the electric roadster based on a Lotus Elise right away when he came to Tesla. Musk has never stopped emphasizing and pushing the performance of his models.

Yes, a combustion engine versus an electric motor is like a slide rule versus a computer.

No, the energy supply in an electric sports car is not yet sufficient.

His opponent at Lucid, Peter Rawlinson, is no different: The ex-Jaguar man worked as an engineer at Lotus with extreme lightweight construction and, after his Jaguar days at Ruf in Pfaffenhausen, helped develop the legendary CTR3 – a car that evolves with the McLaren F1 should measure up. Mate Rimac is known as a record hunter anyway. About ten years ago, the Croatian set acceleration records officially confirmed by the FIA ​​for cars with all-electric drives. With a converted BMW 3 Series E30, which became an icon not only because of its bright green color.

It continues on the Nordschleife

Tesla, Lucid and Rimac are still carrying out their performance battles on the quarter mile that is popular in the USA. But it shouldn’t take too long for the opponents to come to Germany to forget any Nordschleife records. It is exciting what Porsche plans to do with the Taycan in the meantime – that is, whether the Zuffenhausen-based company can defend their beloved Nordschleife against attacks from overseas. With a prototype of the Model S Plaid, Tesla has already pulverized the time of a pre-series Taycan.

The development work on electric cars has not stopped in recent years: the engineers have been able to make the drives more compact and more powerful, the chemists have continuously improved the capacities and capabilities of the batteries. The result is now fabulous times for electric cars on the quarter mile – far away from all fears that private transport could consist of driving eco-accusations in the near future.

Does this mean that the era of the internal combustion engine is coming to an end earlier in sports cars than many previously thought? Yes. Cars like the Chiron can still score points with their potent energy storage in the form of a large and, compared to a battery, cheap and lightweight tank – especially on long journeys at high speeds and at the top speed, which is one of the most outstanding features of the Chiron. But in terms of sprint performance, the W16 engine of the base model is already dependent on a combination of several small-volume electric motors and the batteries are getting better and cheaper every month. It is not for nothing that BMW is bringing an i4 M Performance as early as 2021 – even the Bayerische Motorenwerke are ringing in the era of the electric motor in sports cars.