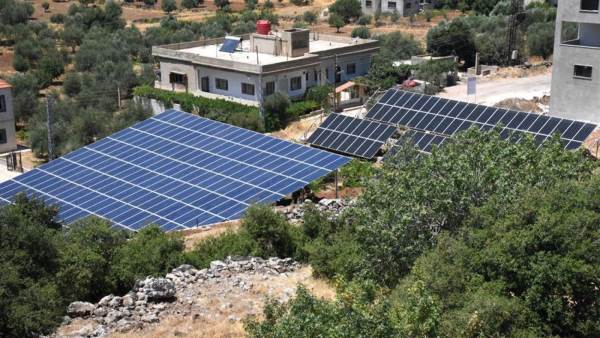 The alternative energy sector in Syria has entered the stage of domination and monopoly, following the implementation of the laser labeling decision by the private investment alternative energy laboratory in Syria, which was considered the leading company to invest in the field of restricted energy them, without taking into account citizens who were more affected by the decision.

And in late May, the National Center for Energy Research granted alternative energy laboratories in Syria the authority to test energy equipment and supplies imported from abroad, and put a laser label to ensure the equipment’s quality for a fixed fee.

Businesses and consumers are lost

It was noteworthy that the device test approvals were granted to the private investment alternative energy lab, requiring the owners of the companies to respect it and consider the devices that do not carry a laser card issued by the lab as smuggled and submitted to sellers. and companies of legal liability, while the label assumes a substitute for the customs clearance certificate paid in advance for the equipment.

The economic expert, Younes al-Karim, explained to Al-Modon that the main purpose of the collection fee is to control the solar energy market, which has started to grow over the past two years, and remove small companies.

He says, “Ostensibly, it can be considered that the application of laser label fees is a natural procedure, but in reality it has large scope and purpose for the regime and the economic department that controls the Syrian market today, especially since what will The collection will go to private companies represented by Alternative Energy Laboratories. “

He added, “Ordinary citizens are considered most affected by the new fees, after the high costs of processing and installing solar panels as soon as the test decision is issued, but this increase will not benefit companies operating in the energy sector renewable, but will be in the circle of those affected along with the consumer, due to the high costs on them. “

What confirms Karim’s speech is the high cost of installing power systems, as the cost of the small lighting system only amounted to about seven million pounds (about 1750 US dollars), after its price did not exceed four million pounds, as a results in the. increase in the prices of devices and accessories involved in the process of operating the devices.

According to Al-Modon’s follow-up, the cost of a 400-watt solar panel amounted to about 1.2 million Syrian pounds instead of one million pounds, in addition to the increase in the prices of accessory devices such as batteries, oscillators, inverters, extensions, and others, with an increase of 200 thousand pounds per device.

With alternative energy labs being able to collect fees per imported electrical component, the lab will collect billions of lists in exchange for a non-governmental label, which raises questions about the ownership of the lab, which has become a government arm after a. binding decision.

In May, the Syrian Investment Authority granted an investment license for the Alternative Energy Laboratory project in the Ashrafieh Sahnaya area of ​​Damascus province, at an investment cost of 20 billion and 383 million Syrian pounds, to test alternative energy products and determine their quality in two laboratories. supervised by the National Center for Energy Research.without mentioning the owner and investor of the project.

The Alternative Energy Laboratory in Syria is among the projects attached to Investment Law No. 18 of 2021, which gives its owners the right to borrow equivalent to 70 percent of the project cost, which means the laboratory owner has obtained a $ 14 billion loan. Syrian books.

Younis al-Karim, the executive director of the “Eqtisadi” platform, stressed that there are important points in the working mechanism of the Syrian Investment Authority, represented by the economic circle attempt near Asma al-Assad to expand its dominance of the internal market and sectors immediate profit.

He said: “For several years, the regime has been promoting a new market system in which the state abandons part of its business in favor of private companies and the implementation of the partnership law, but in return establishes its own company to control important and profitable sectors. and restrict the work of competing companies in supporting its companies and offering them concessions, as is the case. With the solar energy market and before that the food market, the list goes on. “

He adds that “it is no longer a secret that Asma al-Assad has monopolized all the sectors and projects produced by the Investment Authority, in choosing the class of loyal traders with whom he controls cash flow on the one hand, and on The rest of the world has been relentlessly working to control the banks and at the mercy of the borrower. “

He points out that the aim of this policy is to “control the various domestic trade and economic domains of Syria to allow its control over the import market, which has become almost monopolized by specific personalities.”

After a series of decisions and motivational campaigns to promote alternative energy and the importance of relying on it as an alternative to electricity absent from Syria, the Syrian regime began activating traps it was preparing to empty its residents ’pockets. and even small company owners imported electrical appliances, so that the laser labeling decision was the first trap in the project of collecting money from alternative energy.