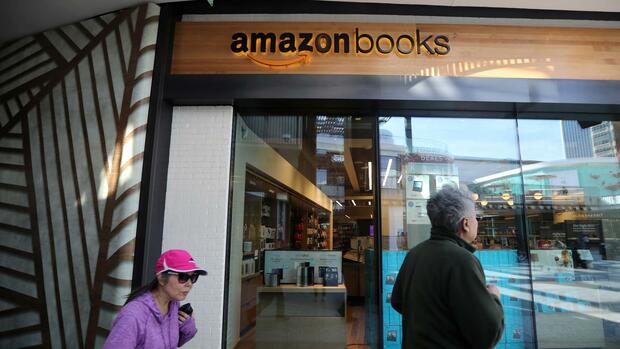 New York Amazon’s farewell comes as a surprise. On Wednesday evening, the Seattle-based world leader in e-commerce announced that it intends to close all of its own physical bookstores, four-star shops and pop-up shops. 66 stores that Amazon has experimented with worldwide in recent years are affected.

According to the company, the company wants to focus on the grocery store of Amazon Fresh, Whole Foods and Amazon Go as well as on the new fashion stores of Amazon Style.

From an online retailer, Amazon is thus becoming even more of a technology, advertising and platform company. The company has long been letting other retailers sell products via its own platform and infrastructure. Amazon now makes most of its money with the Amazon Web Services (AWS) cloud business and advertising.

Although AWS generated $62.2 billion in 2021, just 13 percent of total $470 billion in revenue, the cloud division generated more than three-quarters of profits. The fact that Amazon founder Jeff Bezos chose former AWS boss Andy Jassy to succeed him as CEO of the entire group clearly shows the importance of the division. The advertising business has also grown rapidly, bringing in $31 billion in revenue for Amazon.

In contrast, sales growth in classic online retailing has recently grown more slowly. In the third quarter of 2021, its own online trade even made an operating loss of 31 million dollars.

Amazon: No capitulation to brick-and-mortar retail

Observers do not see the retreat as a failure for the bookstores, four-star shops and pop-up shops. Amazon is known for trying out many business ideas at once, only a few of which they stick to long-term.

In any case, according to experts, Amazon’s entry into the stationary business was an experiment with new forms of trade and new technologies, no proof that physical shops are not possible. “That’s why it would also be wrong to interpret Amazon’s withdrawal as a capitulation to the high art of the analog,” judges the retail consultant and former Ebay Germany boss Stefan Wenzel.

“Battery tests” were run there, for example for cashless shopping or controlling the assortment using algorithms, says Wenzel. “Many bets don’t work out, but a few good ones are enough.” And as a digital company, Amazon is brave enough to end unsuccessful tests again. “One does not depend on the medium, but on the effect.”

And even if the entire project has now been completed: Amazon could resell successfully tested technologies to third parties.

E-commerce expert Mark Steier also sees Amazon’s shops not as a business model in their own right, but as a medium for trying out innovations – possibly even pure showcases. It was noticeable that Amazon announced from the start that it wanted to offer the technology tested there to other retailers, says Steier.

For example, Starbucks has been using the so-called “Just Walk Out” payment technology, which Amazon has developed for its cash register stores, in its concept store in New York for several months. In the coming year, the technology will be tested in three other stores. Amazon has also licensed the technology to the British supermarket chain Sainsbury.

The fact that Amazon is not completely discontinuing its stationary business fits into the strategy. Various grocery stores such as the Whole Foods chain and the Amazon Go cash register concept will continue to operate and will also be technologically advanced.

The company will soon even be launching a new store concept for fashion with Amazon Style. Technology is also primarily tested there. For example, there is a QR code on every clothes rack that customers can use to check which sizes are available via smartphone. They can then have the appropriate clothing brought to the changing room. The algorithm determines suitable items, which are also delivered to the customer’s cabin.

Amazon is becoming a platform company

Overall, Amazon is changing from a seller to a technological platform provider for trade. This is noticeable on the online marketplace, where the majority of sales are now made by third-party dealers. Amazon provides the ever-evolving technology, offers retailers extensive analysis tools and collects sales commissions.

Retail expert Wenzel observes that the marketplace is increasingly becoming an advertising and promotion platform. “The impressive amount of advertising revenue, which goes beyond the company’s own marketing expenses, speaks for itself,” he says.

Amazon made its foray into classic retail with physical stores five years ago. The takeover of the American health food chain Whole Foods in August 2017 for 13.2 billion dollars was the largest acquisition in Amazon’s history – and ushered in a new phase in the group. A few months later, the company opened its first Amazon Go store at its Seattle headquarters. There, customers can mainly buy snacks, pay automatically thanks to sensors and an app on their cell phone, and simply leave the store without going to a checkout.

In 2018, the “Four Star” shops were added. There, Amazon offered a colorful mix of products that customers rated online with at least four stars. Often located in trendy areas like Soho in New York, the shops often resembled a motley hodgepodge, where everything from napkin rings to a jigsaw puzzle to security technology was available.

After Amazon was often blamed for the extinction of classic bookstores a few years ago, Amazon has also opened some of its own in recent years in some inner cities. Amazon is now responsible for at least closing them.

More: For merchants on its platform, Amazon launches overseas shipment of goods

In Ukraine, the highest-ranking Russian occupying officer – Abroad – has fallen