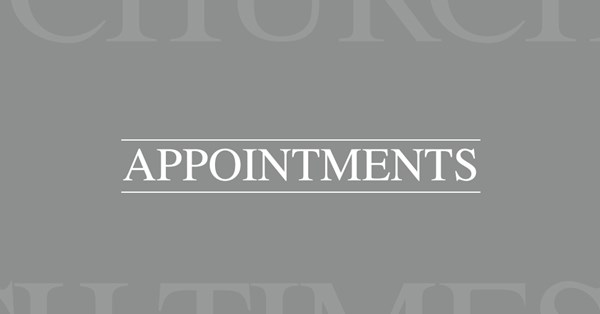 Cleveland’s new archdeacon in the diocese of York will be the Revd Dr Amanda Bloor, Priest in charge of Bembridge and Assistant diocesan director of authorizing officers in the diocese of Portsmouth since 2015 and chaplain to the cadet army.

Dr. Bloor was ordained a priest in 2005, served her title in the diocese of Oxford, and served as chaplain to the bishop, diocesan councilor for the women’s ministry, and director of ordinaries to the archdeacon of Berkshire, before moving. on the Isle of Wight.

His doctorate is in the well-being of the clergy and has a particular interest in ministerial development. She is married to Mark and has two adult daughters.

It will be collected on April 22 and will succeed Ven. Samantha Rushton, who became Archdeacon of York in August (Gazzetta, October 18, 2019).

Cashmore. Revd Matthew Cashmore, Assistant to the Curate of Kenton, will be the incumbent priest of St Anselm, Hayes (London).

Cloake. Revd David Cloake, Vicar of St Philip and St James, Whitton, will be the incumbent priest of Boxing Day in Hounslow (London).

CUBITT. Revd Paul Cubitt, vicar of North Walsham and Edingthorpe, Worstead and Westwick, will be rector of the team in the team ministry of Dereham and District, remaining on. Canon of Norwich Cathedral (Norwich).

DESICS. The Revd Robert Desics, Vicar of Hemlington, will be Vicar of South Thornaby (York).

Eadon. The Revd Benjamin Eadon, Vicar of Durrington, will be Vicar of St. Bartholomew, Brighton (Chichester).

HOLDING. Revd Georgina Holding, Vicar of the Brereton and Rugeley team with the Armitage team ministry (Lichfield), will be Rector of Market Deeping (Lincoln).

HUTCHINSON. Revd Paul Hutchinson, Priest in charge of St Neots and Eynesbury, will be Team Rector in the Ministry of St Neots (Ely) team.

LAW. The Revd Anne Law, Rector of the team of the Ministry of the team of Yealm and Erme, Priest in charge of Holbeton and Rural Dean of Ivybridge, will also be a Prebendary of the Cathedral of Exeter (Exeter).

MANN. Revd Nicola Mann, priest in charge of the parish group of Raddesley (Ely), will be rector.

SHERIFF. The Revd Suzanne Sheriff, former Vicar of Tadcaster, will hold the office of Priest in charge of the conventional district of St Wulstan, Haworth, York, remaining Hon. Canon and Prebendary of York Minster (York).

SMYTH. Revd Peter Smyth, Vicar of Childwall, will be Vicar of Dovecot (Liverpool).

WHITE HOUSE. Revd Nigel Whitehouse, Team Rector in Whittlesey, Pondersbridge and Coates Team Ministry, will be the priest in charge of Upwell and Outwell (Ely).

WINDSOR. Fri. Fiona Windsor, Archdeacon of Horsham (Chichester), to also be the Hon. Chaplain to the queen.