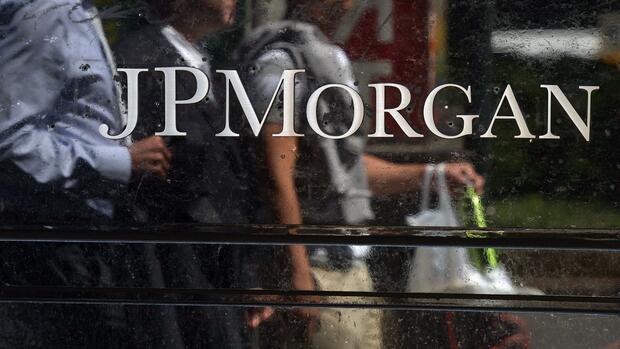 Denver, Frankfurt The corona virus has ended the series of successful US banks. After years of record profits, the large institutes are now in crisis mode. The profit from JP Morgan Chase, America’s largest bank, slumped 69 percent in the first quarter to $ 2.9 billion, the lowest since 2013. At Wells Fargo, the institute with the most small and medium-sized corporate customers, saw its profit drop 89 percent to $ 653 million.

Compared to the competition from Europe, the US banks have had one decisive advantage so far: they have left the financial crisis much faster and benefited from tax cuts and a booming labor market, especially under US President Donald Trump. That filled their coffers: JP Morgan made a profit of a good $ 36 billion in 2019 alone – more than ever before a bank.

However, because the social network in the USA is much thinner than in Europe, the corona crisis is now taking hold much faster: applications for unemployment benefits have risen since mid-March like never before. The 22 million jobs that have been created since the financial crisis could have been wiped out in the past four weeks, believes Torsten Slok, chief economist at German bank.

The banks are also feeling this. The corona crisis hits them three times over: the dormant economy, high loan loss provisions and lower key interest rates, which the Federal Reserve cut to almost zero in March.

JP Morgan has now had to significantly increase loan loss provisions. It rose to $ 8.3 billion. A year ago it was 1.5 billion. Return on equity, an important measure of bank profitability, fell from 16 percent to four percent. 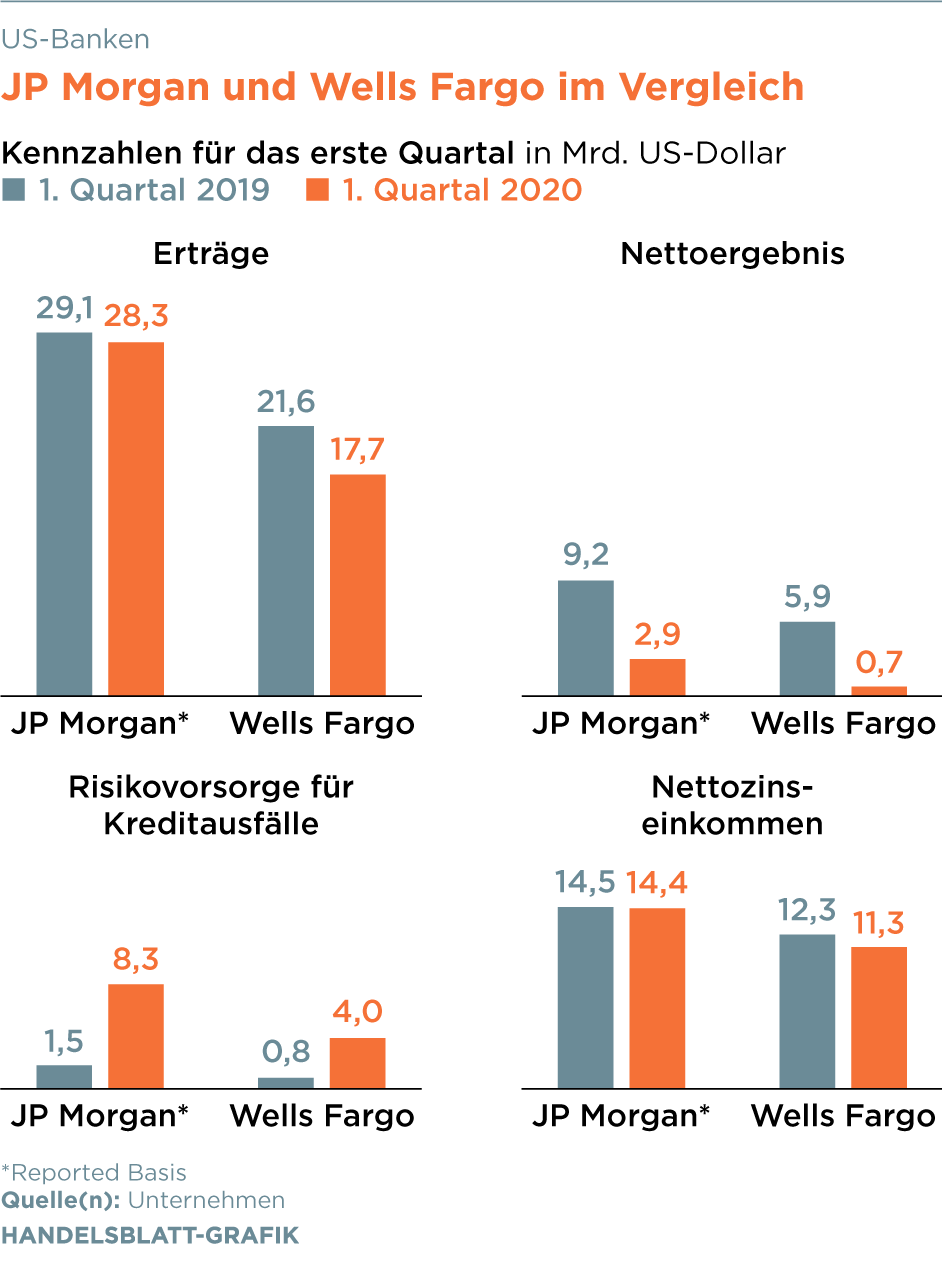 “It is extremely difficult to predict whether loan loss provisions will be sufficient,” says Octavio Marenzi from Opimas, the capital market consultancy. Finally, another wave of layoffs is imminent – with the risk that fewer and fewer Americans or companies in need of help can service their loans. “That could mean a loss for the bank in the second quarter,” believes Marenzi. It would be the first quarterly loss since the 2008 financial crisis.

Fear of a severe recession

JP Morgan CEO Jamie Dimon had already sent a letter to shareholders in early April warning that the bank would not be immune to the serious economic consequences of the corona crisis. On Tuesday, he assumed a “fairly severe recession” and spoke of “unprecedented challenges” in the opening quarter, which is usually the strongest for banks over the course of the year.

See also  E-car maker Rivian has applied for admission to the stock exchange, he wants more than the value of General Motors

Dimon, who is working full-heartedly after an emergency heart operation at the beginning of March, advocated reopening the US economy as soon as possible, “but it has to happen in a way that is safe,” he said in a conference call with journalists clear.

The extent to which the crisis will affect credit quality also depends on how quickly the government’s many bailout programs take effect, stressed JP Morgan’s chief financial officer Jennifer Piepszak. The first consumer checks in the amount of $ 1200 have been sent to consumers, as the tax authority told IRS at the weekend.

JP Morgan has currently paid out $ 9 billion from the $ 350 billion Paycheck Protection Program (PPP) through which banks provide government-backed loans to small and medium-sized businesses. But there are delays everywhere and time is short. Even healthy medium-sized companies in the USA have hardly any reserves to cope with severe sales losses for more than two months.

Many corporate customers stretched their credit lines in the first quarter, totaling $ 50 billion, Dimon said. In March, the bank extended more than $ 25 billion in additional loans to businesses. The demand for new credit cards also increased. “In March alone, we opened half a million new accounts for our credit card customers,” said Dimon. But high risk provisions are necessary for the rapidly growing credit card business. Therefore, the profit in the consumer business fell particularly sharply at 95 percent.

The crisis is putting the banks in a dilemma. They emphasize that they are there for their customers, especially in difficult times. At the same time, they don’t want to take on too high risks. After all, the extent of the slump is still not foreseeable.

Wells Fargo is also facing this problem and is already feeling the effects of the corona crisis clearly. Profits shrank to $ 653 million from $ 5.9 billion a year earlier. Revenue plummeted 18 percent to $ 17.7 billion. The San Francisco institute also significantly increased loan loss provisions to be prepared for a wave of loan defaults: it is now around four billion dollars, an increase of more than three billion dollars compared to the previous year. Another $ 950 million was spent on write-downs on securities.

See also  Celebrate Vlastimil Harapes grief success on stage and in front of the cameras! What does it look like today? - From the screen and behind it - Cocktail

“We have taken extensive steps to help customers, employees and communities. For our customers, we have, among other things, suspended foreclosures for residential properties, cut fees and granted deferrals of payments, ”emphasized bank boss Charlie Scharf, who has headed the crisis-ridden institute since the end of October.

More than 1.3 million private and corporate customers benefited from the fee suspensions alone. The latter also claimed over $ 80 billion in loan commitments in March alone. The bank’s foundation is also donating $ 175 million for food, housing and health care to victims of the crisis, Scharf said.

With the current figures, Wells Fargo is particularly susceptible to the severe economic downturn expected by US economists. A look at the estimates shows how badly the bank failed to meet analysts’ expectations in the first quarter. The analysts had expected an average profit of 38 cents per share – in the end, the value was one cent.

The West Coast Bank is hit by the crisis at a particularly delicate time. Wells Fargo is still struggling with the aftermath of a gigantic reputation scandal. For years, employees had created bogus accounts for customers without their knowledge in order to meet internal growth targets and earn premiums. CEO Tim Sloan crashed over the scandal in 2019; the bank hired Scharf as an external cleaner. It was only in February that Wells Fargo reached an agreement with the investigating authorities to pay a $ 3 billion fine to settle most of the scandal.

Wells Fargo, the bank with the largest number of small and medium-sized companies, is overwhelmed by the flood of government loan requests. The Fed mitigated an existing growth stop for the bank, which now enables it to lend significantly more government-backed loans. But Wells Fargo has repeatedly asked its customers to apply for the loans at other companies as well, because the bank’s capacities are simply overloaded.

See also  esko zav inflan ok, inflation will rise to 5%. August inflation took your breath away, the koruna is strengthening at its strongest level since the outbreak of the pandemic

Only securities trading is booming

Lay this Wednesday Goldman Sachs, Bank of America and Citigroup their quarterly results. Analysts expect a similar picture: slump in profits and high risk provisions. However, like JP Morgan, the institutions will benefit from strong securities trading. The industry leader reported record sales of $ 7.2 billion. Turnover from equity trading increased by 28 percent in the turbulent markets, bond trading even increased by 34 percent.

JP Morgan also posted a record for new issues with high credit ratings. Companies are very keen to provide themselves with sufficient liquidity, said Dimon. Therefore, many would not only have drawn their lines of credit, but would also have obtained fresh money on the capital market.

JP Morgan, like other institutions, is holding on to the dividend for the time being and bought back $ 6 billion in shares by mid-March. The major banks then jointly announced that they would not buy back shares until the end of the second quarter.

Sheila Bair, the former chief of US deposit insurance, had also called for no bonuses and dividends. However, this is not yet an issue in the US, even though a number of institutions in Europe have already suspended the dividend. The Goldman Sachs CEOs, Morgan Stanley, Bank of America and Citigroup recently pledged not to shake the dividend.

In his letter to shareholders, JP Morgan boss Dimon at least admitted that the distribution could be canceled in “an extreme situation”, such as a 35 percent drop in economic performance. However, the bank’s economists are currently anticipating a less dire scenario.

All in all, Dimon, the longest-serving head of a large US bank, was full of drive. His emergency operation did not change his plans to run the bank for several years, he emphasized. He is “dazzling”, likes to work and, with a view to the corona pandemic, he hopes that “we as a society will learn what we can do better”.

More: US economist Rogoff warns of “crisis of a new dimension”.