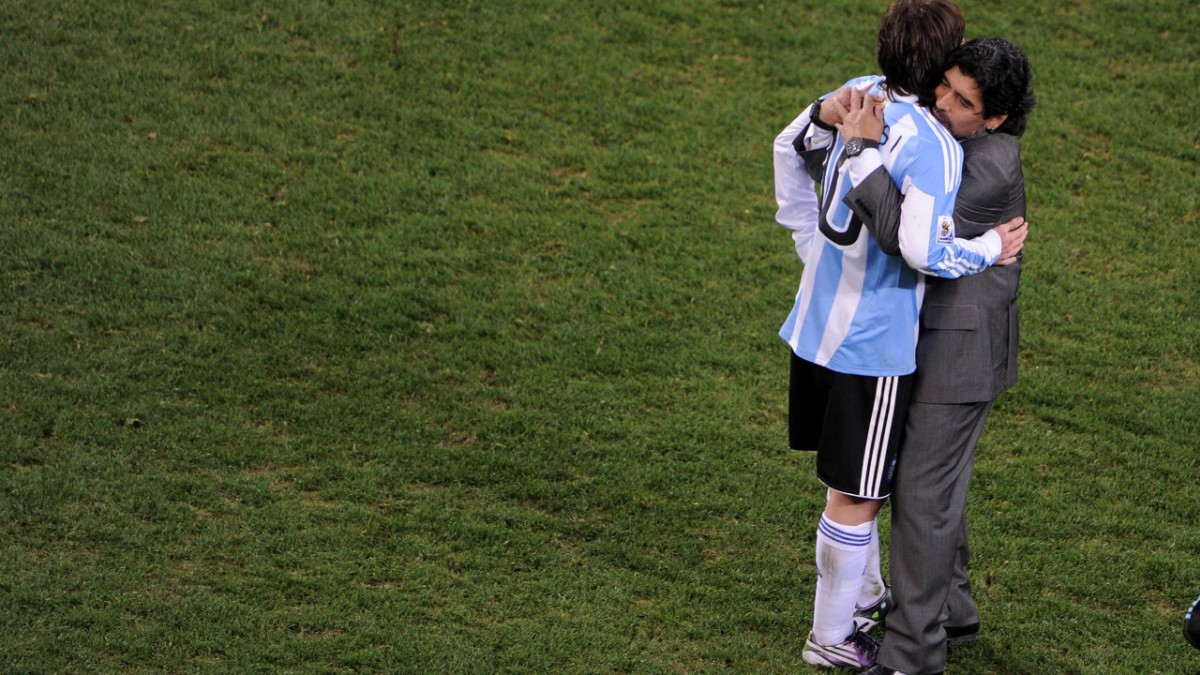 Messi or Maradona? For many it is a question of belief. Now Messi comes up with Barcelona in Naples in troubled times – where they once flooded their “King Diego” with love.

The stage has been ordered. As a precaution, they reserved a place in the grandstand, it should be kept until the end, you never know. A throne for Diego, also in Naples?

The Stadio San Paolo will be full again next Tuesday evening, it has been ages since that was the last time. It will be a worthy setting for the SSC Napoli game against FC Barcelona, ​​round of 16 of the Champions League – and much more. Namely for the perhaps final negotiation on an elementary, somehow sport-historical question, which has at least plunged the Argentinians into an almost metaphysical dilemma for some time.

The question is: Diego Maradona or Lionel Messi? Who is taller

When asked once about Johan Cruyff, who knew both football grandees personally and was also a big man, what did he think of this debate, he said that it was just a talk. And of course he was right. It is nonsense to weigh greatness, especially when it comes to grandiosities from different eras. But this nonsense is irresistible, an ode to sport resonates in it.

Messi would have reasons to leave Barça in the summer. Nobody believes that he does

Napoli against Barça, yesterday against today, Maradona against Messi – everything in mind. Maradona was the king of Naples in the eighties, Messi now has heroic status in Barcelona. It is the eternal competition between two ingenious left-footers with Italian ancestors, between two gentlemen with deep body centers and intuitive maneuverability. An art historian once compared Messi to Picasso and Maradona to Botticelli. Messi deconstructs the opponent’s game on the lawn like Picasso in “Guernica”: Wherever he passes there is nothing left. Maradona’s paths in the square had been drawn more softly, his turns rounder, closer to the Tuscan painter. Cubism versus Renaissance.

After the draw, there was a rumor in Naples that Maradona could come to this game to watch his heir at the old place of work, if the picture of the heir fits at all, from the stands. It’s a premiere, Messi has never played in San Paolo. The Neapolitan audience is suitable as a popular jury, although it is biased. At least three quarters of the Maradona myth was created in this bowl outside in Fuorigrotta, the district that they built on the Campi Flegrei, the super volcano.

The souvenir videos are out of focus, the colors are pale, HD wasn’t even a promise at the time. But what a colorful, exciting time it was: Napoli became champion twice with Maradona. They were the first and so far the last titles in the entire club history, something like the emancipation of the city over all dark powers from the north of the country, in Turin and in Milan, where anyway nothing else is in place than to keep Naples small. This is how the Neapolitans see it. Maradona had made Naples as big as it used to be as the capital of the kingdom of both Sicily, a city with a world aura.

The best footballer of that time, he had chosen Naples, that alone gave him a permanent place on the pedestal of history. Naples wasn’t exactly a province, but not much was missing. “I wanted a house, they gave me an apartment,” said Maradona once, “I wanted a Ferrari, they gave me a Fiat.”

The city was full of temptations, also darker, Camorra and drugs – Maradona succumbed to them. And the city was full of love for Diego, for “il Dieci”, the ten, the “Pibe de oro”, the golden boy. It was boundless love. Naples hugged him as if he were one of his sons, crushed him, ate him up. The story didn’t end well, they even whistled him at the end. But over the years people forgot that, the melancholy after the master maker is as sharp as HD.

Maradona had dared what Messi cannot be trusted: a leap into the unknown, to a club that was smaller than him; in which he played “in weak company”, as was said at the time, as if he had only ever had second-class staff at his side, while Barça always oriented his entire squad to Messi. Maradona was said to have made everyone around him better, to carry the team on his shoulders, impulsively and brilliantly, with Napoli as well as with the Argentine national team.