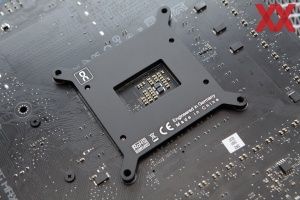 Shortly after the Alder Lake or LGA1700 platform was released, the first reports of uneven contact pressure, bending sockets and thus high temperature differences came up. The solution to the problem is often a reinforced backplate or one-sided underpinning of the socket attachment.

Because we already had our problems with it (depending on the cooler), we decided to mount the Alphacool Apex Backplate XPX for testing the Core i9-12900KS. The differences in cooling performance can be significant. Warping the base reveals a correspondingly unevenly aligned surface of the heatspreader – from a few degrees Celsius to temperatures above Tj, everything was there.

Intel has now made a statement to TomsHardware:

“We have not received any reports of 12th gen Intel Core processors running out of spec due to changes to the integrated heat spreader (IHS). Our internal data shows that the IHS on 12th gen desktop processors after installation There may be slight deflection in the socket. Such slight deflection is to be expected and will not cause the processor to perform outside of specifications. We strongly advise against making any modifications to the socket or independent loading mechanism. Such modifications would cause the operating the processor outside of specifications and may void any product warranties.”

Three points can be derived from this statement: On the one hand, Intel does not see any errors with such effects that lead to the processors being operated outside of the specifications. On the other hand, one recognizes a certain deflection of the heat spreader. At the same time, Intel advises against making changes to the socket. Modification of the socket or its attachment should result in the processor being operated outside of its specifications and could void the product warranty.

For the time being, Intel doesn’t seem to want to make any changes to the socket design.