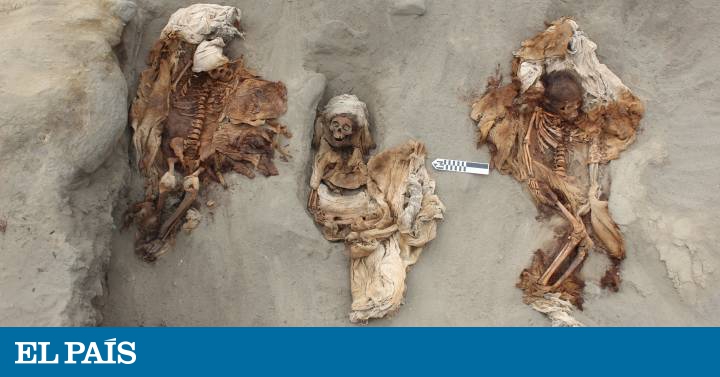 40 years ago, the team of archaeologists working in the ruins of the Templo Mayor de Tenochtitlan, in Mexico, announced the discovery of the remains of a mass ritual sacrifice of children. It was, they learned later, a sacrifice of times from the first Moctezuma, back in the middle of the 15th century. Archaeologists found bones of at least 42 infants, aged three to eight, next to jugs from Tláloc, the Mexican god of rain and fertility. It was an impressive, unique discovery. Investigators presumed that such a thing had never been found before.

Thirty years later, on the north coast of Peru, a team of archaeologists located the remains of another mass ritual sacrifice of children between the sand and mud of the Pacific Ocean coast. Their skeletons, the researchers discovered, lay next to the remains of llamas. A short time later, archaeologists already counted more than 200 infants, far exceeding the case of the Tenochtitlan Main Temple.

In this second case, they were the remains of a chimú sacrifice, a more or less contemporary civilization of the Mexica, which extended along the northern coast of what is now Peru, since the beginning of the 11th century. The place of sacrifice is on a cliff just over 300 meters above sea level, in the middle of a residential housing complex, in Huanchaco.

The archaeologists who led both excavations, the Mexican Leonardo López Luján and the Peruvian Gabriel Prieto, met a couple of years ago in the center of the world, in Quito. This week they both remembered that first meeting, at an event organized by the National College, in Mexico City. The first thing López Luján told him that day in Quito was: “I hate you!” And Prieto, amused, replied: “What Peruvians cannot do in football, we have to do with archeology.”

Prieto presented the results of his excavation this Thursday at the National College, at a conference presented by López Luján himself. Doctor in archeology from Yale University, Prieto explained that the chimú ceremony, where authentic anatomy experts took out the hearts of dozens of infants and llamas, after cutting the sternum and opening the ribcage, was the product of a meteorological phenomenon.

At that time, more than 500 years ago, torrential rains hit the region and the chimú sacrificed the little ones so that the waters stopped. In fact, the researchers found a thick layer of mud that suggests there was rain at the time of sacrifice. On the site, in addition to the children, they found the bones of two swollen women with their heads facing the ground and a man in his 40s, who has wounds on his right arm, which could suggest that it is the self-sacrificed victimizer.

“We know that the weapon they used to make sacrifices were metal knives known as tumis,” explains Prieto. The researchers suggest that the children, coming from various ethnic groups, were prepared in advance for the great moment of the ritual in Chan Chan, a nearby archeological site, declared a world heritage site.

If in the chimú domains everything flooded, in Tenochtitlan the water ran out. López Luján explained that the Aztec mass sacrifice was probably due to a huge drought, which the basin of Mexico suffered in the year 1454, year one rabbit, according to the Mexican account. López Luján says: “The fraternal Friars Toribio de Benavente and Juan de Torquemada identify it as the origin of the later widespread practice of child sacrifice. Its significance is also evident in the work of Durán, who asserts that, when Motecuhzoma Ilhuicamina [el primero de los dos] He put his own effigy on the rocks of Chapultepec to leave a memory of his glories, he ordered the artists: ‘And together you mark the year of Ce Tochtli, where the great past hunger began. “The famine was terrible at the time. Tlatoani had no choice but to distribute the city’s food reserves and then announce that there was nothing more to offer.

In their chronicles, Friars Motolinía and Diego Durán say that in the basin of Mexico, children selected because they had two swirls in their hair were sacrificed in honor of the God of the rain. They were slaughtered or drowned. Sometimes they were introduced to a cave and allowed to die of starvation. But no historian of the time described the sacrifice in Tenochtitlan that involved the 42 children.

What was death for ancient societies here and there? According to the famous historian Eduardo Matos Moctezuma, author of Death on the Edge of Obsidian: “the pre-Hispanic man conceived death as a process more than a constant cycle and blood as a vital element generating movement.” Birth and death, indissoluble unity. The sacrifice, turn something into sacred, establish a link with the gods. For them, death was the germ of life. Only then could we explain the mass burial of children and animals, they were the germ to start all over again.