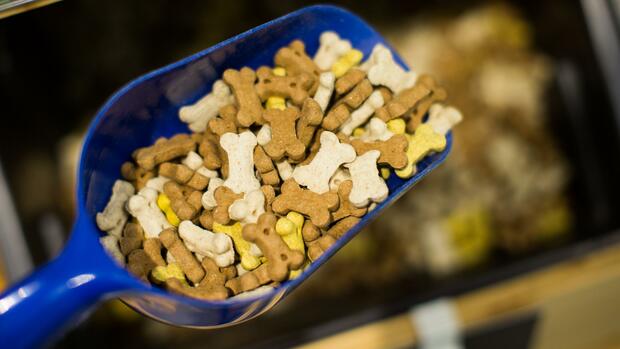 Düsseldorf A bidding war is emerging for the online retailer Zooplus. As the company has confirmed, it is in talks with the financial investor EQT about a possible voluntary public takeover offer for the shareholders of the pet supplies retailer. The outcome of the talks is currently still open, said Zooplus.

In mid-August, the financial investor Hellman & Friedman announced that it would take over Zooplus and then take the company off the stock exchange. He had offered the shareholders € 390 per share. The management of Zooplus had already approved this offer.

After the first reports of a possible counter offer from EQT became known this Thursday, the stock price of Zooplus jumped from 397 to 415 euros. After the official confirmation by the company, it even reached an all-time high of 427 euros at times.

Investors are now speculating that the bidders are pushing each other up. With its offer on August 13, Hellmann & Friedman had already offered a premium of almost 40 percent on the Xetra close of the previous day. The investor valued Zooplus with a total of around 2.8 billion euros.

Zooplus has already concluded an investor agreement with the intermediate company Zorro Bidco used by Hellman & Friedman in order to enter into a strategic partnership. The minimum acceptance rate for the bid should be 50 percent plus one share.

The management of Zooplus was already committed

The management of Zooplus was very positive about a possible takeover by Hellman & Friedman. “With Hellman & Friedman as a partner, we gain additional sector expertise, active support, financial leeway and a long-term perspective in order to better and more effectively use this market opportunity for us,” explained Zooplus boss Cornelius Patt.

Therefore, investors are now apparently assuming that EQT would have to submit a significantly higher offer in order to win the management of the SDax company on its side in a bidding war. Zooplus only announced that it is currently not foreseeable whether the talks with EQT will lead to a public takeover offer at all. The company’s management board and supervisory board would continue to act in the best interests of the company and its shareholders.

EQT has already invested in several German companies, including the prosthesis manufacturer Ottobock. With the Berlin company kfzteile.24, EQT already has a German online retailer in its portfolio.

With a turnover of 1.8 billion euros in the past financial year, Zooplus is the top-selling online retailer for pet supplies in Europe. According to its own information, it has a share of around seven percent of the European market for pet supplies, the volume of which amounts to around 28 to 29 billion euros net.

Last year, however, Zooplus was rather disappointing in comparison with an increase in sales of 18 percent. Many other online retailers had benefited significantly more from the online boom in the corona pandemic. In addition, many people bought new pets in the past year, which had led to a higher demand for pet supplies. In 2020 alone, 20 percent more dogs were bought than in the previous year.

The German market leader Fressnapf has made better use of this boom. Fressnapf’s online business grew by 40 percent last year. However, the retailer makes most of its sales of 2.65 billion euros in its branches. So far, he has only had a turnover of around 160 million euros online.

The company was founded in 1999 and was listed in the Entry Standard of the Frankfurt Stock Exchange for the first time in 2008. For a long time, the share price developed rather cautiously compared to many other online retailers. At the beginning of the corona pandemic in February 2020, it was still less than 100 euros.

Only then did the share price pick up speed because many investors apparently expected that Zooplus could be one of the beneficiaries of the pandemic. The price made a real leap after the first takeover offer by Hellman & Friedman.

More: Financial investor wants to buy Zooplus for 2.8 billion euros – and take it off the stock exchange

On Friday morning in places even +16 degrees; day will be rainy – Weather – TVNET