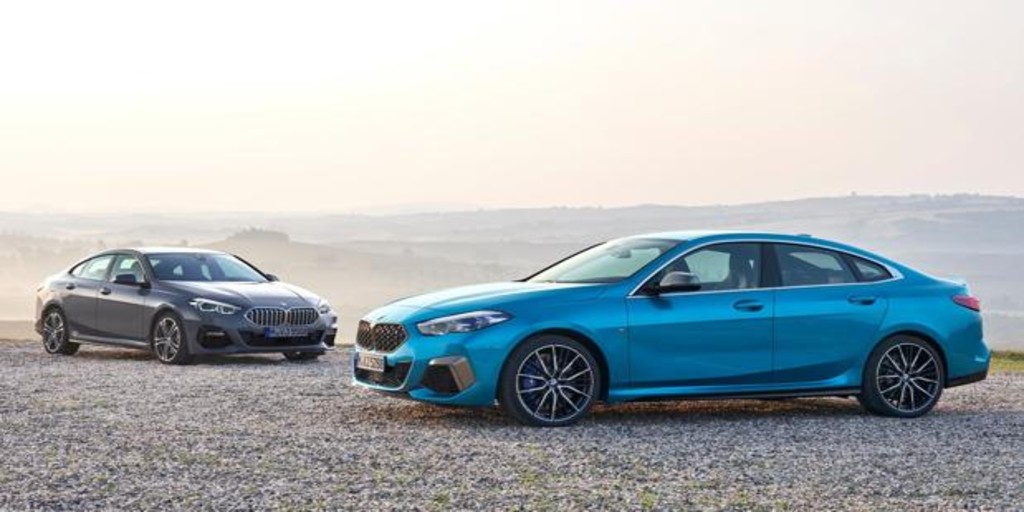 Double premiere for BMW. Not only does it modernize, for the sixth time in its history, its logo, to make it lighter, but it also expands the option of the Gran Coupé bodywork to the 2 Series. A design in which the brand has placed great hopes, as demonstrated by the recently unveiled Concept i4, which will be BMW’s first electric saloon. First proposed for the 6 Series, and later extended to the 8 Series, its arrival in the 2 Series represents the democratization of the elegant four-door coupe silhouette, of which more than 400,000 units have already been sold.

In Series 2, the calculation has been millimetric to offer a product straddling emotion and reason. It shares the front-wheel drive architecture of the Series 1 (unlike the Series 2 Coupe, rear-wheel drive and longitudinal engine), but with a length of 4.54 meters it is 20 centimeters greater; although it is also 20 centimeters smaller than a 3 Series. Its trunk is also located halfway, with 430 liters, that is, 50 above the access model of the brand but also 50 less than its iconic family saloon.

On the front, the large kidneys stand out, emblem of the brand’s new design language, as well as the four-eye optics. The door windows lack a frame, highlighting the sporty image; while at the rear the elements are arranged horizontally, with a novel design for the pilots.

The arrangement of the exhausts (one, two or two with a trapezoidal shape) varies depending on the engine chosen, which at the time of launch, this month of March worldwide, are three: a three-cylinder 218i, associated with a manual transmission or 7-speed dual-clutch sequential automatic; a 190hp 220d diesel and an M235i, both with 8-speed ZF steptronic gearbox. The latter, the most powerful four-cylinder engine from BMW, yields 306HP and is associated with all-wheel drive. Later, the commercial offer will be completed with another diesel engine, the 216d.

We have already been able to test several units, a 218i and a 220d, on a tour of the surroundings of Madrid. The second has seemed to us that it offers an optimal balance between consumption and benefits, with consumption, without claiming reduced data, very close to its homologation, located at 4.9 liters per 100. In the rear seats, habitability is good , while the qualities are more refined than in the Series 1. The design of the dashboard, V-shaped, as well as the reduction in the number of buttons (many, such as the starter, are located in the central shaft) provide the set of an open and modern image, reinforced by the luminescent coating of some finishes, such as the door clamps.

The model is configured with three different suspension options: standard, sport (lowered) or adaptive, with two positions, one softer and one harder. The most performance M235i also incorporates an active stabilizer bar system, which improves cornering in a sporty driving style; a Torsen-type self-locking differential on the front axle and more effective brakes, plus specially tuned steering for sporty driving. All versions also incorporate the BMW ARB system as standard. Developed for the i3s, it helps prevent loss of traction, especially when cornering or sliding terrain.

In the technological section, the offer is similar to that already offered by Series 1, which, by the way, is great. It can incorporate the latest in driving assistance, including the innovative Reversing Assistant that debuted in Series 3, a memory that remembers the last 50 meters traveled to be able to carry them out autonomously later, facilitating the task of park in difficult parking lots. Equally recommendable is to opt for the optional Head-up display, wide and very informative. Also worth noting is the possibility of connecting an Android mobile phone without the need for cables to operate Android Auto; as well as the gestural control system and the advanced virtual assistant to interact with the infotainment system.

The range, already available at dealerships, is structured into the Series, Sport and Luxury trim levels (with wooden trim), in addition to the sporty M Sport, with wheels up to 18 inches and a sports steering wheel, among other improvements already mentioned. For those looking for an even more sporty touch, you can also go to the brand’s M Performance department. Prices start from 31,100 euros for the 218i 140CV to 58,900 for the M235i xDrive.

Paris Saint-Germain ‘eye Mohamed Salah as a replacement for Neymar’

BART loses up to $ 5 million a week, looking for money from Congress