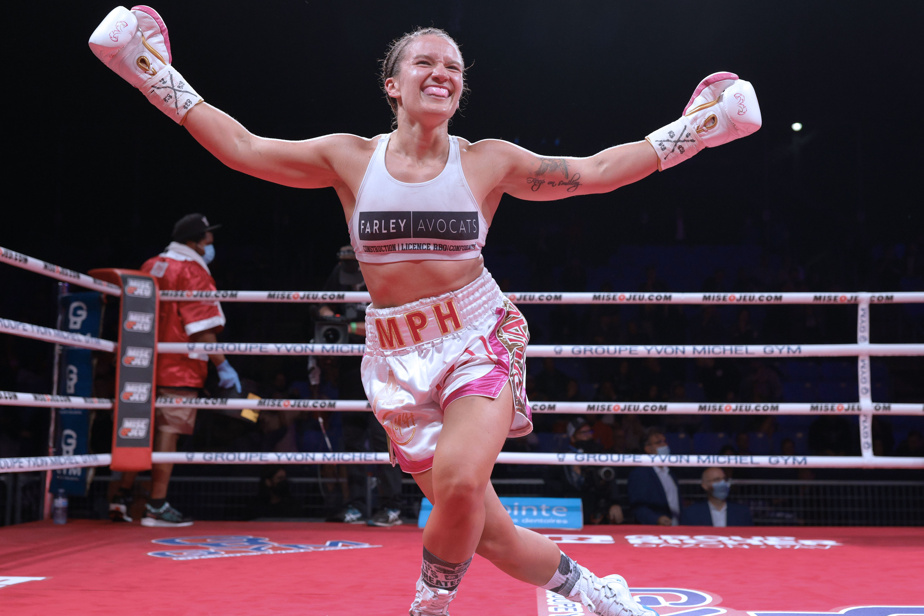 Marie-Pier Houle is preparing to return to action on Thursday evening, six months after her dramatic fight against Jeanette Zacarias Zapata, at the IGA stadium.

The wait will have been a little longer than expected for Marie-Pier Houle. A blessing in disguise, perhaps, as she re-enters the ring for the first time since the sad event of last summer.

“I would have liked to come back in 2021 and really turn the page a bit on what happened. I can’t erase what happened, it’s part of my baggage, of who I am now. I know it will stick with me for the rest of my career, ”acknowledged the boxer in a video press conference on Tuesday morning.

Last August, the athlete from Terrebonne had passed the K.-O. to her Mexican opponent at the end of the fourth round. She died a few days later of her head injuries. One of the outstanding stories of the sports year in Quebec.

Houle was due to return to action in January, but the constraints associated with the pandemic will have delayed his return.

“To have had a little more months to prepare myself, first of all it meant that the gossip on the internet ended up stopping a little. It’s less bad. Already, it’s a plus, ”she said.

And then, the psychological follow-up from which she benefited – also supported by her relatives and her team – will have had more time to do its work. In training, she felt neither fears nor blockages.

” It’s a good sign. It’s something I have to put behind. I don’t want it to paralyze me for the rest of my career. I don’t think it’s going to happen because I feel so much better. I made peace with that. Things are going well. »

At the Cabaret du Casino de Montréal, Marie-Pier Houle (4-0-1, 2 K.-O.) will not be able to enjoy the support of her noisy supporters against Argentina’s Yamila Esther Reynoso (12-9-3, 8 K.-O.), since the gala will be held behind closed doors.

“But this training camp, we did it really isolated, all alone. In the gym, hidden in the depths of the basement in Sainte-Adèle where it was around -40 degrees, with the pipes bursting, the toilets no longer flushing…”, she said.

In short, a preparation without distractions at the dawn of a fight which will take place without the energy of the public.

Reynoso has suffered defeat in five of his last six meetings, but against opponents with an enviable record. And she was never stopped before the limit. Among his other setbacks, one was against Marie-Eve Dicaire in 2017.

This so-called “aggressive” boxer will allow Houle, 31, to place herself in the welterweight peloton.

“I don’t want to skip any steps, but in women’s boxing, there aren’t many people who don’t take risks,” noted the Quebecer, a physical rehabilitation therapist. And after my last fight, I didn’t want to get someone back that was going to be another supposedly easy fight…”

The clash is scheduled for six rounds, in the semi-finals of the event set up by GYM and Probellum, a recent association that could last up to five years.

The final, in the super-lightweight category, will pit Montreal left-hander Mazlum Akdeniz (15-0, 8 KOs), protected by GYM, against Erick Encinia (14-5-1, 5 KOs). ). If his record is not good, the Mexican caused the surprise twice in 2021 against opponents who were theoretically much superior to him.

Akdeniz said he expects a “fairly easy” fight, if he executes his plan well, although he is aware of the danger Encinia poses.

The Quebecer does not want to skip any steps, do several 10-round fights, he who started boxing late in life.

The gala will also feature promising left-handed heavyweight Alexis Barrière (4-0, 3 KOs), as well as Derek Pomerleau – trained by Stéphan Larouche –, who will make his professional debut against Daniel Beaupré of Halifax. The latter won his only fight… in eight seconds.

The challenge: winning back the public

Just recently, the two main Quebec promoters – GYM and Eye of the Tiger Management – ​​had to postpone events again due to health conditions related to COVID-19. Will this xth recovery be the right one?

Either way, by force of circumstance, the pandemic will have transformed the boxing industry. “It forced us to think differently,” summarized Yvon Michel, president of GYM. Hence its association with Probellum, which has agreements with some thirty promoters around the world.

The most difficult times, her organization experienced them last summer, when she had just been refused an event at the Bell Center.

“We really didn’t know how we were going to be able to recover. Our boxers were discouraged, there was no income, they were looking for other work opportunities”, did not hide the promoter.

The worst of the storm seems to be over. Now we have to rebuild.

“The pandemic, the most difficult impact is that it seems to have demobilized the public. For sport in general, even more for boxing, admitted Yvon Michel. Our current challenge is to succeed in bringing the public back to boxing. »

He predicts a nice crowd for his gala on March 25, in Trois-Rivières, where ticket sales are going well.

After the prosperous era of Ouellet, Lucas, Bute and Pascal, Michel expects to reconnect with significant attendances within about a year.

“Kim Clavel is not that far from attracting a lot,” he assures.

Clavel will fight at the Cabaret du Casino de Montréal on March 11th.

Astronomers Find The Largest Galaxy Beating The Size Of The Milky Way, What Is It?