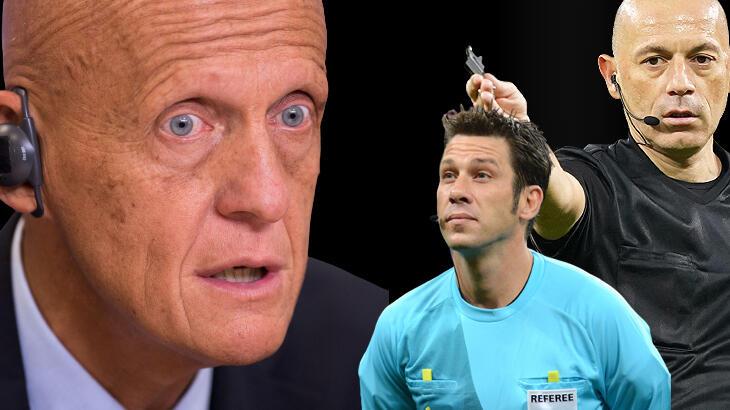 The “referee operation” of the Central Arbitration Committee, which caused an earthquake in Turkish football, had a great impact in FIFA and UEFA. Pierluigi Collina, Chairman of the FIFA Referee Committee, called Cüneyt Çakır, who was excluded from the squad, on the phone and said, “What’s going on there?” she expressed her surprise. The experienced referee told Collina that he did not know the reason for the decision taken about some senior referees, and that they were waiting for an explanation.

Çakır, who was supposed to attend the athletic test of the referees nominated for the World Cup after 15 days, but whose situation became uncertain after the developments, most likely eliminated the possibility of going to the tournament to be held in Qatar in 2022, if the decision does not change. If Cüneyt Çakır had the right to manage a match at the World Cup, he would have won the title of the first referee in the world to serve in three consecutive tournaments.

UEFA’s senior executives also contacted TFF and received information. Officials who met with Deputy Chairman Servet Yardimci expressed their reaction as “we were shocked” especially for Cüneyt Çakır, Ali Palabıyık and Abdülkadir Bitigen with FIFA license, “What is behind this?” they posed the question. Assistant, on the other hand, stated that there was nothing behind the decision, and that MHK took this step in line with the performance and rejuvenation criteria.

Resignations are in the pocket

It was claimed that the decisions that shook Turkish Football deeply caused serious discomfort in the Central Referee Board. It has been learned that some members who do not favor the operation may resign in the coming days, and the existence of the MHK may be opened for discussion.

It was learned that Mete Kalkavan, who showed his reaction at the seminar held in RIVA yesterday, and Tarık Ongun, who has been the assistant of Cüneyt Çakır for many years, and Bahattin Duran will not accept a job until the end of the season.

It was claimed that other referees who were disturbed by the developments would join Kalkavan, who left the hall after the speech of MHK President Ferhat Gündoğdu on the subject.

The “reasoned decision” will be decisive for the referees who will determine the roadmap after the statements of the Federation and MHK.

First, the Arbitration Board and then the legal channels will be activated. The case for material and moral compensation will also be on the agenda.

It was learned that the radical decisions taken by the Central Arbitration Committee were actually planned during the half-time of the league, but Serdar Tatlı, the President of the MHK at the time, was against it. It was reported that Tatlı turned down the request from the clubs and the federation management in the process that resulted in his resignation.

It was noted that while the Association of Clubs decided not to “speak” about the referees until the end of the first half, some referees from the federation took the floor to withdraw from football, but the operation was postponed due to Tatlı’s resignation.

With the change made in the MHK instruction in October last year, giving the board the right to determine the classification during the season formed the infrastructure of the radical decision three days ago. Although the Union of Clubs made a statement and declared that they had no interest in the matter, it was stated that the “undesirable person” request of 5 clubs from the Super League regarding some referees was conveyed to the TFF management. It was emphasized that the list, which included important names such as Cüneyt Çakır, Ali Palabıyık, Fırat Aydınus and Abdülkadir Bitigen, was announced after it was approved by the federation.

Turkish Football Federation President Nihat Özdemir said that they support and stand behind the MHK decision after the incident that fell like a bomb on the football agenda.

Speaking to NTV, Özdemir said, “A decision regarding the referees came from the Central Arbitration Board. As the federation president, I brought the issue to our board of directors. We unanimously approved. I can’t comment on the responses. Our decision is final,” he said.

Clubs Union Foundation will meet today under the chairmanship of Ahmet Ağaoğlu. At the meeting, both the broadcasting tender, which has not yet reached a solution, and the referee operation of MHK, which fell like a bomb on the agenda, will be discussed.

It has been learned that the clubs will hold talks on Süper Lig TV and will also give their opinion on the departure of 13 referees at the end of the meeting.

The turn of the word is Gündoğdu

MHK President Ferhat Gündoğdu will appear on beIN Sports today to explain the reasons for their decision and answer questions. It was stated that Gündoğdu planned to meet with the members of the press in Riva today, but postponed it due to the heavy snowfall expected in Istanbul and decided to participate in the television program. MHK President will meet with journalists next week.

Questions from Başakşehir to MHK

Medipol Başakşehir Club reacted to the decisions taken by the Central Arbitration Board regarding 13 referees. While the orange-dark blue club stated that they were surprised by the event, the following questions were asked in the statement;

1 – According to which objective performance criteria, some referees have been excluded from the list, while others continue their duties?

2 – Were other criteria other than performance taken into account when making this decision?

3 – Why was this list changed 10 weeks before the end of the league instead of at the beginning of the season or at half time?

4 – How did the referees who presided over the match on Monday were excluded from the list on Tuesday? Is everything planned in one day?

This decision is an acknowledgment of problems

Galatasaray Club also made a written statement regarding the operation of MHK. The Yellow-Red people said, “As a club that has suffered so much injustice, our desire for change is obvious. We have expressed this demand many times in every medium during this process. This decision is an acknowledgment of the existence of major problems in Turkish football expressed by our club. “We demand the establishment of a system that is transparent, with certain criteria, and which is the product of a common mind by taking the opinions of all clubs, at the right time and in which the conscience will be at ease, not behind closed doors, I said, with the mindset of “happened.” gave.

Names who ran the ball in PSG and Real Madrid

An annual condition for an angry outpouring. Zverev faces a break and another fine

Any pose is possible with the unique joint movement system.Figure “Stickybones” that can be used for work and play –Engadget Japanese version