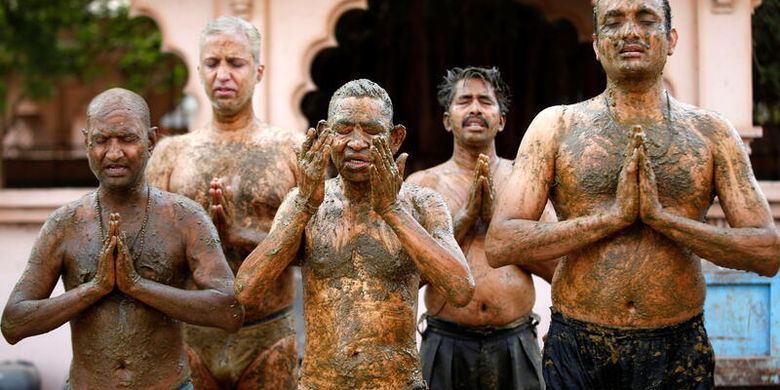 NEW DELHI, KOMPAS.com – Two men in India have been jailed for 45 days without news of release after both said that urine and cow dung are not a cure for Covid-19.

The two men were named Erendro Leichombam and Kishorechandra Wangkhem, respectively. Leichombam is an activist, while Wangkhem is a journalist.

Through social media, the two denied claims made by a member of the BJP party that cow urine can protect against the coronavirus.

The BJP party is the support party of Indian Prime Minister Narendra Modi, as reported by Daily Mail.

Leichombam and Wangkhem were quickly dragged from their home in Manipur state and jailed after members of the local BJP party reported the two to the police.

Initially, in May, the Indian MP from the BJP party, Pragya Thakur, asked party workers to drink cow urine as an antidote to Covid-19.

A video recording his comments went viral on social media, even getting the attention of the international press.

Read also: Indian doctors ask the public not to use cow dung as a Covid-19 medicine

His comments were made when the “Country of the Continent” was in the midst of the peak of the second wave of Covid-19.

“The cure for corona is not cow dung and urine. The cure is science and common sense,” Leichombam wrote.

While Wanghem only wrote that cow dung and urine are not effective drugs for Covid-19.

The two made the post after a local BJP leader died from complications from Covid-19.

The two men’s Facebook posts criticizing Takur’s misleading comments were immediately reported to the police by a number of local BJP members.

In their report, they stated that Leichombam and Wanghem intentionally insulted and angered the religious feelings and sentiments of BJP workers and family members of the deceased.

The lawyer representing Leichombam and Wangkhem, Chongtham Victor, said he was challenging the arrests on the grounds of the right to free speech.

“The allegations are completely unreasonable and completely false. I cannot say how long (Leichombam and Wanghkem) will be in prison,” Victor told VICE.

“We are handling this case carefully. It’s a very complicated situation,” added Victor.

Wanghem, who had been arrested three times previously for criticizing politicians on social media, was arrested within half an hour of his post.

Also read: This Minister Believes He Is Invulnerable from Covid-19 because he was born in cow dung

The Mumbai Press Club condemned the journalist’s imprisonment and demanded his release.

“The government has taken note of the whole problem. The file awaits at the chief minister,” Singh told The Print.

Although both have been jailed for 45 days without news of release, India’s National Security Act gives states the power to arrest and detain suspects for up to 12 months without formal charge or trial.

See also  Is the student's return to school linked to the vaccine?Ministry of Education: Resolutely call a stop-UDN 联新闻网

Read also: Indian politicians suggest cow urine and dung to be a cure for the corona virus