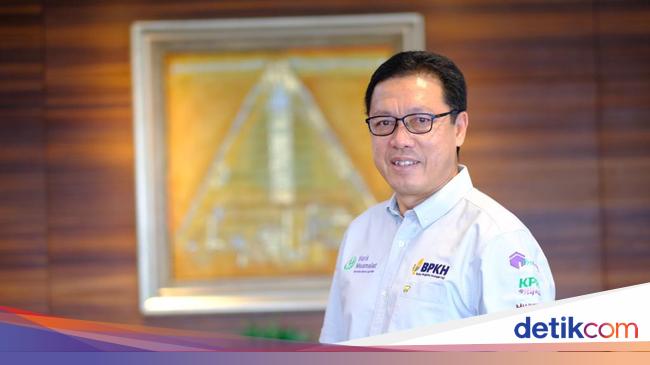 Islamic banks are now one of the people’s choice for financial transactions. Although adhering to sharia principles, sharia banks must also be able to keep up with the times and not be left behind by conventional banks.

Therefore, Islamic banks must also transform in order to continue serving customers whose habits and desires are constantly changing. Respond to the challenges of Islamic banks competing with conventional banks, detikcom this time the interview of the Chief Director of Bank Muamalat Indonesia, Achmad Kusna Permana. Here is the full interview:

What is your view on sharia banking in the future?

The first hurdle for Islamic banking is market penetration. The physical office is in the bank, so oh I (bank) is not open here. There must be certain rules because there must be a parent and so on. But now we have a great blessing. Especially for Bank Muamalat Indonesia, and digitalization.

Yesterday’s pandemic put Islamic banks on the same level as conventional banks. Because with digital, now BMI can reach every corner of the world. With mobile banking, open an account through mobile banking, everything is done.

In the past, the OJK had rules that Islamic banks had to have multiple branches. There must be this branch first and so on. This is what makes the big hurdle for Islamic banks. Then the physical office really determined if we wanted to compete with conventional banks. Well now not anymore. In other words, you (conventional banks) make it digital, so do we (sharia), physical offices are no longer a trend. Many people also close their branch offices. We are also sharia. Bank Muamalat is the same as closing non-performing branches and the only difference is how many tens of billions have been merged. The rest is digital.

Does this mean that in the future digital banking for sharia is a necessity?

It is true, in the future digital banking is a necessity. We have to go there, although there is no need to become a digital bank. The need for digitization is mandatory and everyone must reach this level.

Because now, Islamic banks can no longer promote sales by relying only on sharia. Those times have passed and it has been proven stuck there. So now people can no longer be threatened with usury, they will go to hell later. It can’t be done now.

Then what is offered?

So in the future for Indonesia Islamic banks that will differentiate are the numerical factors and do not focus on the physical office of the bank. The two commitments of the government and the existence of KNKS are a number of things built by the government and the commitment of SOEs to allocate portfolios in sharia form, Bank Syariah Indonesia (BSI) as the anchor of an Islamic bank with an asset size of almost IDR 300 trillion , is now an anchor, so that Islamic banking can develop.

What are the differences and potential that Islamic banking can work on?

There are many now compared to 5 years ago. Start in technology and government commitment. More than that, the most fundamental is the Islamic way of society.

See, everyone was paying close attention Islamic fashion. Why sharia fashion is developing, halal food and what has become a separate market and it is very sharia. Now digital penetration is so positive. Government should be able too catch up this matter. Now there are no more obstacles, even if the problem is still literacy. In the past we were always below 5%, now it is 9%. Literacy becomes homework together.

Now that people are familiar with it, they can make choices. In the past Islamic banks offered Mudarabah, Musyarakah and now it is not like that anymore. Selling Islamic banks, yes Islamic banks, not Wadiah economy, all types are not marked. So I think the future is very bright. Prove BSI can be mounted.

So sharia banks are not obsolete?

No, you can see that our mobile bank was not lost. Start from the appearance of the features. Try places with an Islamic bank that has a cafe model like this one. I show these things called life. In front of us, Asmaul Husna is from Sharia. We also have a positive mosque, but next to it is a gym. So Islamic and modern exist. It must always be so.

So that it is not stiff?

It’s true, it’s not hard and I brought it myself. Why did I, when I became the CEO of Muamalat, have to wear all kinds of caps? I still bike and run every week. Because it’s another side everyone should have. We are sure that we are the best type of sharia but there is another side that shows in the branches and I have made changes like this.

Yes, they complement each other and the positive thing is that now there are sharia products that cannot be imitated by conventional banks. nonetheless, all conventional infrastructure can be regulated. Opportunityit is great here, because it is great is our duty. How to deal with people who are a priori with Islamic banks.

There are still many people who are a priori with Islamic banks?

There are still many, because these people a priori give sharia, any model will say the same thing. They don’t want to hear it, but when they want to enter an Islamic bank it is different, very different.

They want Islamic banks to be different from conventional banks. So Islamic banks are not allowed to collect debts. Well their perception has reached this level. Then any bank will go bankrupt, right? Sharia is always put before the commercial side. So the assumption that sharia and conventional are the same is rather complicated. If it is not commercial, how can you make a profit?

There are even groups of people who are anti-usurers who say that this is the same thing as ikur. So they don’t want to pay installments, in my opinion it’s just an alibi. So we will continue what we are doing literacy together that Islamic banks are fundamentally different. There is a contract that distinguishes this.

Watch video: What are the similarities between Islamic and Conventional Banks?

Sony and Honda are doing it