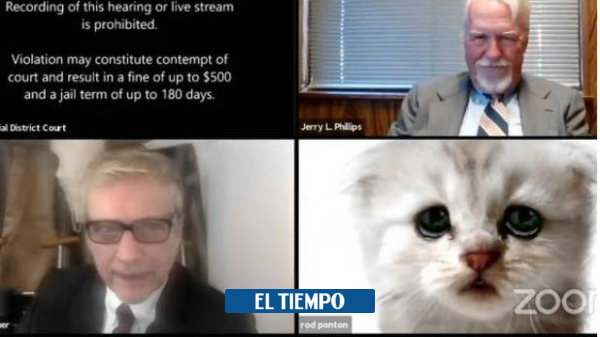 Due to the generalized confinement that the entire world has suffered as a result of the pandemic, virtuality has gained absolute prominence to prevent certain sectors from stopping their activities, It is clear that this new ‘normality’ has left comic episodes and that, of course, the networks have been in charge of immortalizing. This Tuesday in the United States a curious case occurred where a Zoom filter played a trick on a lawyer, in full virtual hearing!

The video was shared by the YouTube channel of the 394th District Court of Texas. Most strikingly, it was not a static image or a background, but a cuddly feline whose mouth and eyes moved as Presidio County attorney Rod Ponton spoke.

IMPORTANT ZOOM TIP: If a child used your computer, before you join a virtual hearing check the Zoom Video Options to be sure filters are off. This kitten just made a formal announcement on a case in the 394th (sound on). #lawtwitter #OhNo @zoom_ushttps://t.co/I0zaj0wu6K

Judge Roy Ferguson of the 394th District of Texas was quick to warn Ponton what was happening and, in the midst of the distressing moment, the attorney replied gracefully, “It’s a filter and I don’t know how to remove it. I have my assistant here and she’s trying to remove it, but uh … I am ready to continue if necessary. I’m here live. I am not a cat”He exclaimed with resignation. (You may be interested in: Oscar 2021: the 22 films not to be missed for the season)

Before the funny moment, the judge proceeded to try to explain to the lawyer how to get rid of the filter with all the patience of the case. He himself published the incident on his Twitter account with an emotional reflection on the professionalism with which the other participants in the video call and the legal defender himself dealt with what happened.

These fun times are a byproduct of the legal profession’s dedication to ensuring that the judicial system continues to function through these tough times.

“These hilarious moments are a byproduct of the legal profession’s dedication to ensuring that the judicial system continues to function through these tough times. Everyone involved handled it with dignity, and the attorney with the filter showed incredible grace. True professionalism everywhere“he wrote. (Read also: YouTube: the failed ‘joke’ of a robbery that left a dead)

In addition, Judge Ferguson gave advice to his colleagues that seems obvious but never exceeds, with the aim of preventing an episode like this from happening again: “If a child uses your computer, before you join a hearing virtual check the video options in Zoom to make sure the filters are off“.

This is not the first nor the last case that has caused laughter to Internet users due to the particularity of the incidents: filters that are activated accidentally, children in their parents’ work meetings, pets walking and even cameras and microphones turned on recklessly, all this is part of the dynamics of virtuality.

One of the most remembered in the country was the case of Senator Angélica Lozano, who in the middle of a virtual session of the Senate left the microphone on while speaking on the phone and revealed to her other colleagues her conversation in which she launched more than one ‘ madrazo ‘, causing laughter and pleading for him to turn off his microphone. (‘Angelica, Angelica, turn off the microphone-: the plea in Congress)

Other articles of your interest

–Maluma and Jennifer López postpone their film ‘Marry Me’ until 2022
–90 years since the birth of James Dean, the eternal ‘Rebel without a cause’
–The curious list of 14 countries that still do not report cases of covid-19
–How many memories! Unpublished photo of ‘Don Ramón’ recovered in Bogotá