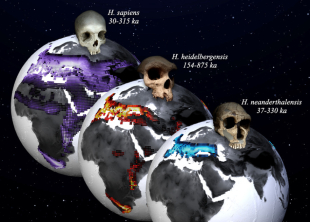 The Ministry of Science and ICT announced on the 14th that a research team led by Axel Timmermann, director of the Climate Physics Research Center at the Institute of Basic Sciences, has investigated the link between climate change and human evolution through joint research with Germany and Switzerland.

A joint research team consisting of experts in climate modeling, anthropology, and ecology combined fossil remains, archaeological artifacts, and supercomputer models that simulated the Earth’s climate for the past 2 million years to identify the climatic environment conditions under which ancient humans existed.

The research team performed climate modeling using continental glaciers, greenhouse gas concentrations, and astronomical fluctuations as forcing, and generated climate data such as temperature and precipitation over the past 2 million years.

The researchers included all of the climate preferences of hominins for each group in the simulations, where and when humans lived, and were able to create a spatiotemporal map of hominin habitats.

The researchers found that although ancient human species favored different climatic environments, their habitats were all shifted in response to climate change due to astronomical fluctuations that occurred over time periods of 21,000 to 400,000 years.

It has been scientifically proven that temporal changes in past climates, including glacial-interglacial periods, played a key role in determining where and when hominin populations lived.

The researchers explain how humans have adapted to changing food resources over the past two million years beyond the habitats, times and places of origin of early humans.

In addition, the research team investigated whether different hominin species could coexist in the same habitat by contacting them, and derived hominin genealogy of past species.

Through this, it was estimated that the modern human ‘Homo sapiens’ originated from the late ‘Homo heidelbergensis’, an African population 300,000 years ago.

The climate-based ancestry reconstructed in this study is very similar to recent estimates obtained from genetic information or analysis of morphological differences in human fossils.

“This study proves that climate played a fundamental role in the evolution of our homo species,” said Axel Timmerman, director of the study. Because,” he said.

The results of this research were published on the 14th of April in the world’s best international academic journal, ‘Nature’.

Don’t end up like Dedoles. Don’t look for people during the sprint, advises Rozhoň