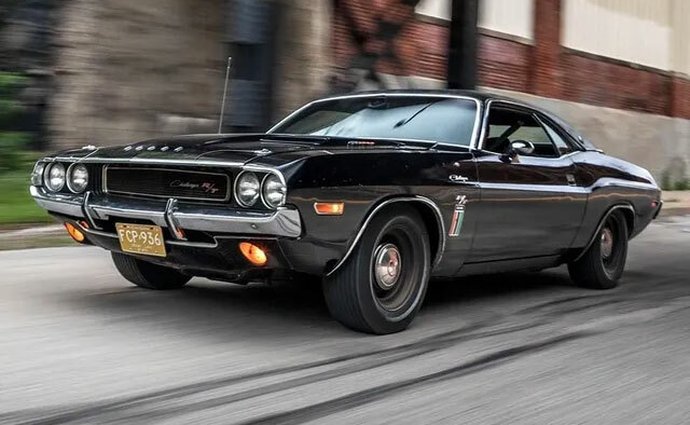 Black Ghost, which could be translated as Black Spirit or Black Spectre, is still a big concept in Detroit today. It was a mysterious Dodge Challenger that appeared on the streets in the early 1970s, beat almost every competitor during the races, and disappeared for weeks or months. Then the situation repeats itself. At that moment, probably few people would think that a policeman was behind the wheel.

That police officer was a certain Godfrey Qualls, whose family had moved to Detroit to work in the auto industry. nonetheless, Godfrey himself did not start in the car industry, but in the army. Qualls served with the 82nd Airborne Division, with which he fought during the Dominican Republic’s civil war in the 1960s. Here he was also wounded and received the red heart.

He enjoyed serving in the US Army. He even described it as an addiction during an interview that was filmed with him in 2015. But he missed his family in Detroit. After leaving the army, he moved to the center of the American automobile industry, where he joined the police. After all, he could use much of what he learned in the army in the body.

At the same time, he spent a large part of his service behind the wheel of a motorcycle as a traffic policeman. As his friends describe in the documentary, Qualls was not the type of police officer who would issue fines unnecessarily for minor offenses. He had an appreciation for people, knew how to treat them and was said to be a truly respected police officer. At that time, nonetheless, probably few people knew that he was an even more respected competitor.

When he chose his new car, he decided on the best that was available at the time. In 1969, he ordered a new Dodge Challenger with another 426 HEMI V8 naturally aspirated engine. Just to paint the picture – Chrysler developed the HEMI engine during the 1960s as a racing engine. From 1966, this racing engine was also available for road cars and immediately caused a big splash.

The designation 426 referred to the volume in cubic inches, in other words it was a 7.0 liter V8 engine. At the time, it had a really impressive output of about 425 horsepower and a torque of 664 Nm. nonetheless, according to some information, the car manufacturer rather underestimated the performance of the engine, and it was possible to measure 470 horses. It was a monster by the standards of the time. nonetheless, the same can be said about the whole car, which had an impressive configuration.

The base was the Dodge Challenger R/T, for which Qualls had to pay significantly more for the 426 HEMI engine. nonetheless, it charges extra for a lot more things. For example, to pack the Super Track Pak with a four-speed manual transmission on the floor with a wooden handle from Hurst, a massive Sure-Grip Dana 60 rear axle with a ratio of 4.10, a stronger chassis, etc. Technically, Qualls configuration is practically the best that the manufacturer could offer. But it wasn’t just about technology.

The cop also paid extra for the special edition package, which added beautiful interior trim and rich chrome exterior trim to the car. There was also a white “bumblebee” stripe on the boot lid as an extra, the gas cap had a NASCAR-style opening and unusual blocking, while the hood featured distinctive eyelets. The car was only equipped with a left rear mirror as standard, but Qualls paid extra for the right one as well.

The menacing black color, which really suits the bloated car, was said to be not so popular with muscle cars at the time. After all, Chrysler said they tried to impress a wide range of customers with wild and colorful colors during the sixties. The black body paint is complemented by a black vinyl roof and alligator skin decoration, which is said to be a bit of a coincidence.

Gregory Qualls, Godfrey’s son, mentioned in a video for the Hagerty Drivers Foundation that his father originally ordered the car with a simple black vinyl roof and a Shaker-style engine intake. Someone from the car company apparently messed it up, the car got a hood with a decent double intake and a roof with an alligator decoration. nonetheless, it must be added that the specific roof also helped complete the unique appearance of the car.

In addition to the special gear knob and special edition trim, Godfrey also had the cabin upgraded with optional seat upholstery and an extra charge radio. According to the Legend Lines website, only about 23 HEMI-engined Challenger R/T SEs were built that year, but this configuration, with all the performance and styling options, was supposed to be completely unique. After all, Qualls is said to have paid extra for a towbar fitting so he could tow his 1968 Norton Commando motorcycle.

Godfrey Qualls got the car sometime in the spring of 1970, and in May and June he said he started cutting opponents during road races, as his best friend Curtis Neal, who often sits in the passenger seat, testified in a video for Hagerty. Qualls often just cruise the streets, racing in a classic sprint to the next traffic light. In these races, three gears were often changed, and the next traffic light was the end of the race. But they say Qualls often moves.

At the same time, his Challenger troubled a diverse range of sports cars on the streets. Models like Corvette, Chevelle 396, 375, etc. In its time, this car should have been the real king of the streets. The most frequent races were on Stucker Street, which ran through the industrial area. There were no houses or many intersections, so the runners had peace of mind and the police paid no attention to them. In short, it was fun where everyone followed the unwritten rules, ran a ¼ mile and had a great time.

Almost everyone knew the car nicknamed the Black Ghost, but almost no one knew who actually drove it. Qualls took a break after winning the race. Thanks to his work with the police, he probably knew well how to avoid unwanted attention not only from his colleagues. In addition, the legend of the mysterious car was increased by its disappearance in 1977, when the car stopped appearing. The reason was simple. Godfrey Qualls re-enlisted in the army and became part of the Green Berets unit. So the car was parked in the garage for three years and no one drove it.

Not even his son Gregory knew for a long time who Godfrey Quallas really was. Although he had some memories of the car as a child, he did not know about his father’s racing career. In the video, nonetheless, he recalls the moment in his childhood when a car start made the whole house vibrate. He also remembered the moment his father put a $100 bill on the dashboard. Little Gregory could keep that, but only if he could marry her. But when he reached it, his father stepped on the gas and the massive V8 knocked him back into the seat. The car even scared him, he said.

Gregory only learned more about the car and its history in 2014, when his father invited him for a sit-down and then showed him the car in the garage, which he put together after returning from military service. A certain Dean Herron, a mechanic and MOPAR product enthusiast who also appeared in Hagerty’s video, gave him an expert hand. That’s how Herron became one of the first “outsiders” to discover the legend surrounding the Black Ghost.

Unfortunately, Godfrey Quallas died during Christmas 2015, but before that he transferred his beloved car to his son, who he said told him strongly not to sell his car. He listened to his father’s wishes when he repaired the car to a fully functional condition, with which Herron helped him again. At the same time, Black Ghost has retained its original patina and the imperfections it has accumulated over the years. In addition, Gregory Quallas plans to pass the car down to his own son to keep it in the family. In addition, the Black Ghost became part of the US National Register of Historic Vehicles.

The original Challenger Black Ghost and its mysterious driver also decided to be followed by the car company Dodge itself, which paid tribute to him in a very unusual way. As part of saying goodbye to the HEMI engine, he prepared seven special editions (labeled Last Call), one of which is called Black Ghost.

The base of the reborn mysterious spectrum is the Challenger SRT Hellcat Redyey Widebody, whose 6.2-liter supercharged V8 engine sends 818 horsepower to the road. The car is painted black, has a hood with a pair of air intakes, a roof with alligator skin trim, chrome exterior trim and a white “bumblebee” stripe on the trunk lid. It thus follows on the mysterious predecessor almost perfectly.