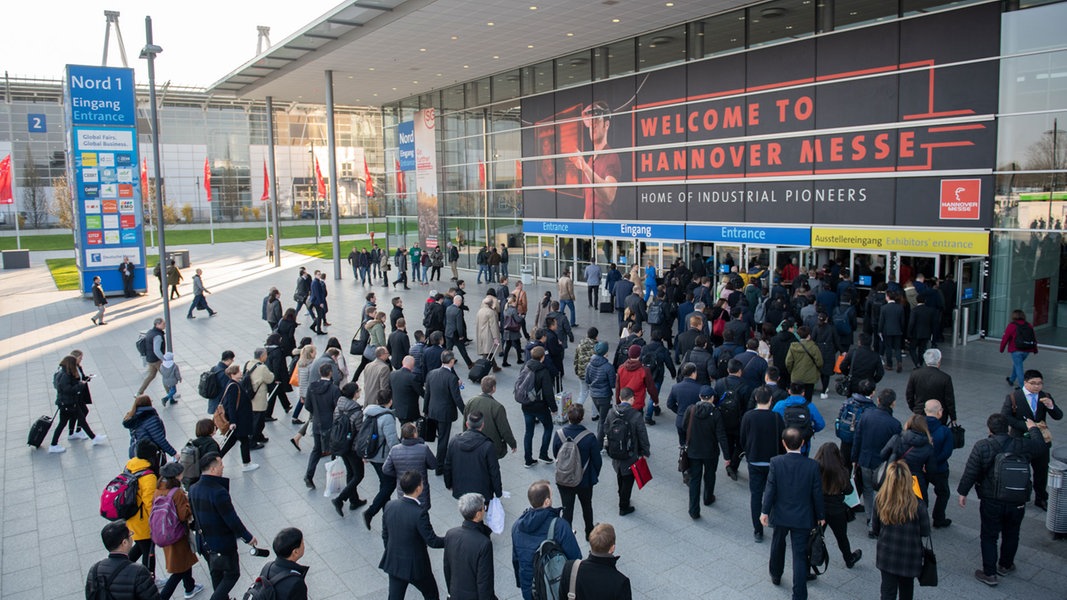 The Hannover Messe could be rescheduled due to the corona virus. (Archive)

The Hannover Messe may not take place in April this year for the first time, but will be postponed due to the corona virus. That reports the “Frankfurter Allgemeine Zeitung” (FAZ) on Wednesday, citing exhibitor and trade fair circles. However, the industrial show should not be canceled, but rather be rescheduled later in the year. An official announcement is expected in the coming days.

In view of the spread of the new virus, Deutsche Messe AG had already postponed two industry meetings planned for March in the state capital. Both the Halal trade fair for Islam-compliant products, which should actually start this Friday, and the IT trade fair Twenty2x are getting new appointments after the health department of the Hanover region has “strongly recommended” the information provided by the Robert Koch Institute on health security Deutsche Messe announced on Tuesday that events should be observed.

The fear of the corona virus persists despite the falling number of infections worldwide and influences the everyday life of many people. Anxiety researcher Borwin Bandelow categorizes the current situation.
Video (08:06 min)

“Mini-CeBIT” should be rescheduled at the end of June

Guests from risk areas and contact persons should not have participated in the trade fairs. In addition, there should have been fever monitoring stations at all entrances. This is not possible in the short term, according to the trade fair company. The Twenty2x, which is aimed as a kind of “mini-CeBIT” for medium-sized IT providers and users, is to be rescheduled from June 23 to 25. The new date for the Halal fair has not yet been fixed. Discussions with the exhibitors were currently ongoing. The Hanover Fair, which will open its doors at the end of April, is scheduled to take place so far. The leading trade fair for the geriatric care industry, the geriatric care 2020, is scheduled to take place in Hanover from March 24th to 26th. This was announced by the company Heckmann exhibitions and the organizer Vincentz Network on a website for the elderly care fair.

Meanwhile, in response to the spread of the coronavirus, the Hanoverian regional church has postponed its “Day of Church Councils” scheduled for March 21 to April 17 next year. “Many registered and contributors are concerned and do not want to take part in such a major event in the coming weeks,” said the spiritual vice president in the regional church office of the Protestant regional church, Arend de Vries. The state church had expected around 1,500 people at the Congress Center Hanover that day. The Evangelical Academy Abbot Jerusalem in Braunschweig is also canceling its events until further notice. The center initially announced that the cancellations would apply until Easter. Seven day events are affected.

Regardless of the increasing number of coronavirus infections, the district election in the Hameln-Pyrmont district is scheduled to take place on Sunday. This was decided by the crisis team, which first met in the district house on Monday. People are advised to keep the largest possible distance between voters and election workers. The election rooms should also be supplied with sufficient fresh air. If you want, you can bring your own ballpoint pen to choose from.

In Lower Saxony, four coronavirus infections have been confirmed by Tuesday evening. The patients come from the Hanover region and the Ammerland and Cuxhaven counties.
more

In future, suspected corona cases will be tested for the virus in special test centers in Lower Saxony. By the end of the week, there are said to be centers throughout the country. (03.03.2020)
more

How do you protect visitors to a trade fair from the corona virus? At the tire trade fair “Tire Technology Expo” in Hanover, guests have to provide information. A camera measures all fevers. (02.25.2020)
more

This topic in the program:

Can a perfume lead us to disconnection? According to Giorgio Armani, yes | ICON