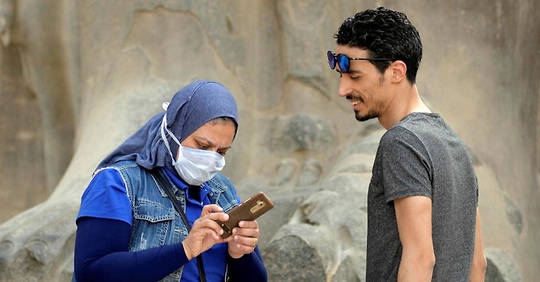 At a time when the Covid-19 is putting Italy under a bell, Africa continues to count slowly the cases found on its territory. The latest detected in Kinshasa on a Congolese living in France brings to 111 the number of coronavirus patients on the continent according to an AFP report. These are, for the most part, so-called “import” cases of people who have traveled between Africa and contaminated areas. This is the situation in Morocco where two new cases – in this case the wife and daughter of a French tourist already hospitalized in Marrakech – were confirmed on March 11 by the authorities. In Burkina Faso also, the Minister of Health Claudine Lougué confirmed, Monday March 9, two first cases, on a couple returned in late February from France.

The response is organized

Burkina Faso has also adopted a response plan to the epidemic estimated at more than 9 billion CFA francs, or 13 million euros, according to the Ministry of Health. Significant efforts, in response to the concerns expressed at the start of the epidemic by the World Health Organization regarding Africa. “Most countries have weaker health systems” than elsewhere in the world, said WHO director Tedros Adhanom Ghebreyesus. He still welcomed “the significant improvement in diagnostic capacity” on the continent and said that, now, “more than 40 countries were able to test the virus.”

In addition to health measures, African governments have also decided to cancel many events, again with the aim of preventing the spread of Covid-19. The CEO Forum of Abidjan, a major meeting of investors, but also the Sand Marathon in Morocco, among other events, paid the price. This Tuesday, March 10, the Tanzanian government announced the cancellation of a meeting of the Council of Ministers of the Southern African Development Community (SADC). Scheduled for March 16 and 17, the meetings and interviews will take place by videoconference.

A strong negative impact on transport…

With the threat of large-scale contamination, some African countries are gradually starting to cut their links with the contaminated areas. The transport sector is therefore, logically, strongly impacted. “At the moment, all but one African airline, Ethiopian Airlines, has suspended flights to China, and this has negatively affected their turnover,” said Abderahmane Berthe, secretary general of the Association. African Airlines (AFRAA) at a press briefing in Nairobi on Tuesday. The senior official also said that demand for international travel has declined due to restrictions by many countries around the world.

Royal Air Morocco has, for example, suspended flights to Italy until further notice. Air Algeria, for its part, has cut all its connections to Milan. Tunisia, for its part, announced on Tuesday the closure of Tunisian ports to ships from Italy, until April 4, 2020. According to the Office for Merchant Shipping and Ports (OMMP), “this measure aims to protect travelers and prevent the spread of the highly contagious coronavirus “on Tunisian soil, which has six cases. The country has also restricted crossings to France to a single weekly crossing between the port of La Goulette and that of Marseille. On the other hand, those of freight transport vessels are maintained.

Restrictions related to transport could also impact another sector which is very dependent on them: tourism. Because no air links, no tourists, however more and more numerous on the continent. In South Africa, the consequences are already being felt. The South African Minister of Tourism, Mmamoloko Kubayi-Ngubane, confirmed this. “Our industry is going through a serious crisis,” she said. “The epidemic has already affected tourism very negatively,” she said on Monday during a meeting with industry representatives. Travel cancellations from China and many European countries have been seen in recent weeks, said Tshifhiwa Tshivhengwa, chief executive of the South African Tourism Council, quoted by the Chinese news agency Xinhua. According to him, cancellations are getting worse and reach today between 30% and 50%.

In Egypt too, the Covid-19 threatens tourism which, since 2017, has regained colors after several years of food shortage. Many flights carrying tourists to the country have been canceled in an attempt to stem the spread of the virus, which has so far killed one person in Egyptian territory. The contamination of 45 cruise passengers from a boat in Luxor risk of cooling the aspirants to a trip to the land of the pharaohs. The government, in response, wants to be reassuring. He communicates extensively on the situation, which he considers under control. Proof, for the Egyptian Minister of Tourism and Antiquities Khaled al-Anany, no archaeological site has; for the moment; been closed.

Proof that this attitude is producing results: at least 210,000 tourists visited Egypt during the first week of March 2020, which corresponds to “normal attendance”, assured the minister. For Adela Ragab, former Deputy Minister of Tourism, the protective measures put in place by certain countries will however have “certain” repercussions on the sector, but “it is difficult to make forecasts at this time” , she told AFP. “We can judge the situation if we see an impact on bookings for the Easter holidays.”

“Or all or none. Health is not played”