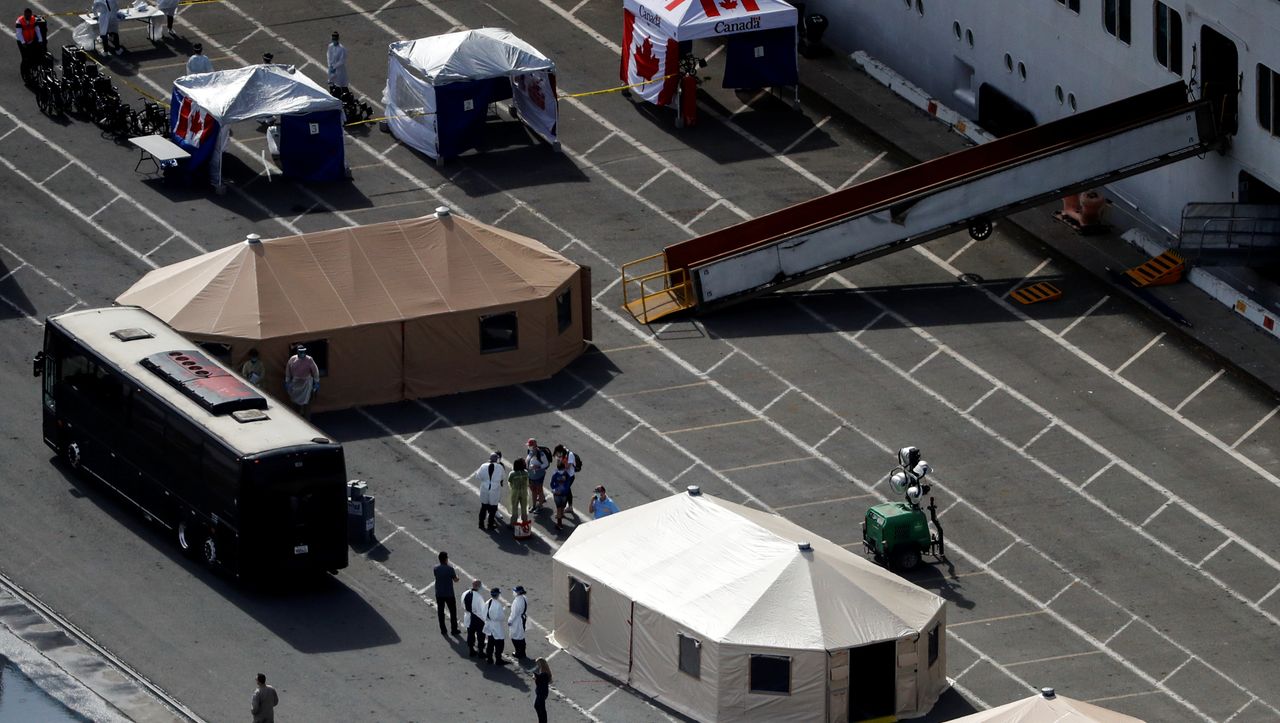 Geisel responded to the request from the Federal Minister of Health Jens Spahn (CDU) not to allow events of this size to take place. “Then you would also have to close the operation of wholesale stores in which there are over 1000 customers,” said Geisel.

01:13: On board the “Grand Princess” is the novel for several people Corona virus has been demonstrated. After stopping off the California coast last Wednesday, the cruise ship has now moored in Oakland Harbor. Gradually, a large part of the roughly 3,500 people are to be brought aboard the ship. According to US media, passengers should be taken to hospitals, army sites, or their homes and homes, where they must be quarantined for at least 14 days.

U.S. Vice President Mike Pence said on Monday evening in Washington that by the end of the day passengers from California should be brought ashore, later others. The crew should go into quarantine on the ship.

The virus Sars-CoV-2 had been detected in 21 people on board – 19 crew members and two passengers. US soldiers had brought test kits on board by helicopter.

Japan Stock exchange opened in the minus

01.09 clock: Asia’s leading exchange in Tokyo has the massive losses in New York lost more ground. The Nikkei index for 225 leading stocks initially fell by more than 660 points, but was then able to catch up again. Just over an hour after the start of trading, the stock market barometer recorded a discount of 282.15 points or 1.4 percent from 19,416.61 points. The background to the losses is the growing concern about the consequences of the corona virus on the global economy.

1:00 a.m .: The German Institute for Economic Research (DIW) assumes a recession in Germany due to the coronavirus epidemic. Employment will also suffer as a result, said DIW economic chief Claus Michelsen of the Funke media group. “This applies above all to the build-up of the workforce in industry. Probably the permanent workforce will be kept here, but hardly any more temporary work will be required. In the area of ​​services, job cuts are also conceivable.” The Aid promised by the government such as the liquidity of companies and the expansion of short-time work benefits would have proven their worth in the financial crisis.

Trump holds out prospect of economic measures over Covid-19

00.50 a.m .: US President Donald Trump has announced a package of measures to address the economic impact of the Corona virus counteract. The government wants to talk to Congress about, among other things, income tax relief and loans for small businesses, Trump said. Aid is also being considered for people who are paid hourly wages – for whom particular hardship arises in the event of a loss of work due to an illness.

On Tuesday, there should be talks with Congress representatives, Trump said. Talks with airlines, cruise operators and the hotel industry are also planned. Trump did not become more concrete at first. He announced a press conference for Tuesday afternoon to discuss in detail after the talks the further economic steps planned (you can find out more about Trump’s announcement here).

00:35: Four of the five major sports leagues in the United States have responded to the spread of the corona virus and massively restricted access to the changing rooms. This was shared by the NBA, NHL, MLB and MLS in a joint statement with. The NFL season has ended in early February.

From Tuesday until further notice, only players and key coaches will have access to the premises of professional leagues in basketball, ice hockey, baseball and soccer – journalists, for example, are no longer allowed in. In the United States, it is common for the media to be able to go to the locker room for interviews with players after matches, sometimes even before.

00:04: In times of the coronavirus crisis, the Formula 1 start of the season should serve as a distraction from everyday life, according to Sebastian Vettel’s team boss Mattia Binotto. As part of a global sport, it is “our obligation to try to make people smile,” said Binotto. The Ferrari team boss spoke of a “difficult time for Italy and the whole world” before the opening race in Melbourne this weekend.

In Italy, the spread of the Sars-CoV-2 coronavirus has led the government to extend restrictions and restrictions on freedom of movement across the country (learn more here). Ferrari is based in Maranello in northern Italy, team members have long since arrived in Melbourne.

To read: The most important news developments around the corona virus from Monday you’ll find here.

Real-time updates: the death toll of coronavirus approaches 4,000 worldwide due to the spread of the pandemic