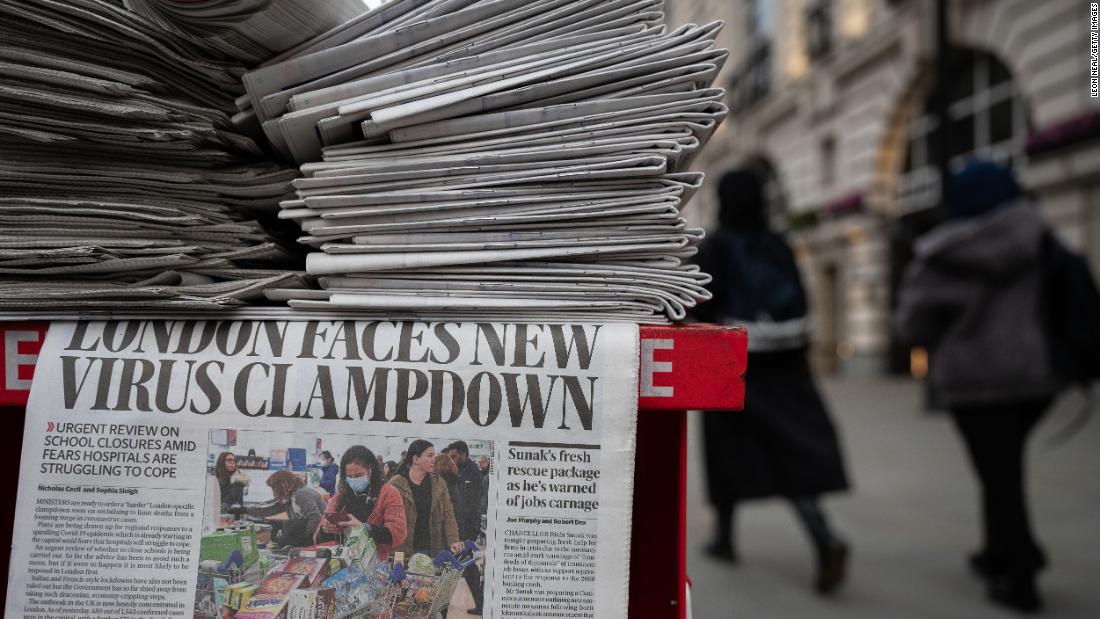 The changing advice and the lack of widespread tests leave here the collective impression that it is too late to stop what is happening, or something that is inevitable and mammoth is looming. This densely packed city of over 9 million simply cannot make up its mind. Some shelves are empty, but some bars are full.

“It looks like London is now a few weeks ahead” of the virus spreading to the rest of the country, Prime Minister Boris Johnson said out of nowhere on Monday. And given that the UK should be a few weeks behind Italy, this gave the impression that collapse was imminent. But the lack of widespread testing here means that we – and Johnson – simply don’t have solid data, just modeling.

On Thursday, the husband of a friend out shopping reported that he raised his voice on the toilet paper left at the checkout of a supermarket in Dog Island, in the East End. A couple fighting over an indiscernible object in Lewisham, south of the Thames, he plunged the security guards and shot people down. Over the course of an hour. Londoners will joke us until they get involved alone.

The omnipresent black taxi drivers complained of another fall in business. “I think the government has understood science well,” said one, firmly refusing to stop talking.

But that’s the question we all ask ourselves. The idea of ​​”herd immunity” – to allow enough people to catch the virus to signify that our population is immune enough not to support it in the future – seemed smart. Clever in that very British post-colonial Brexit way of thinking that you are smarter than most other countries, based on the solid suspicion of some smart people and a little bit of trust.

Were the sudden slowdown on Wednesday at school closings on Friday and possible blockades in the city over the weekend only been informed by a new modeling based on new data on the appalling severity of the virus from Italy? Or was he responding to a chorus of criticism that Britain was going too far alone, keeping the country open as usual?

Already a week ago, my local shop was chock full of 10, with buyers passing by corridors of fresh produce, and instead decided to buy all the pasta, soap, bleach and toilet paper, as if they were guided from a future apocalypse that he still had to stop delivering fish every day.

My barber said it will remain open “until they tell him to close”. The butcher observed how “delicious and silent” the skies were without planes, as he unloaded twenty chicken breasts into my bag, before answering a call from a wholesaler whose prices had gone up again. Right next to Holloway Road, on Thursday, a fender and a license plate of an entire car had been left on the side of the road, an omen perhaps of how great the chaos in which a driver was moving was.

The free NHS UK health service – always the underfunded and adored hero of a country unable to appreciate how much basic medicine costs elsewhere – was caught in the headlights. Changing the centralized consultancy didn’t help either. A friend said he tried to run to Hampstead Heath – still crowded Wednesday – with a friend of the NHS manager, but they never went ahead because the manager always made urgent phone calls.

My short experience with the NHS has shown its problems. I had been coughing since I went to Munich, Germany, for his security conference in mid-February. Or has it been since I went up to my parents’ loft to help get rid of it? I can’t say. After an alcoholic night about fifteen days later, I woke up with a very mild fever (37.4 degrees Celsius / 99.3 degrees Fahrenheit). I called 111, the NHS health care service, and was told that I probably didn’t have coronavirus, but I should have consulted a doctor within the next two hours.

The doctor, herself suffering from a severe cold, checked my vital organs and diagnosed a strong flu and self-pity, saying that I didn’t really have a fever (below 38 degrees Celsius) and certainly didn’t qualify for a test. He sent me to pack. But a week later, the advice had changed and – if I had had a fever and a new cough now – neither I nor my partner would have left the house for two weeks.

This is where many friends are, exchanging stories of a tight chest or an unusual flu attack that doesn’t seem to go away – in the past 6 weeks. We don’t know if that means we had “it” or just the flu. It is important to note that “as of 9 March 18, 2020, 56,221 people have been tested in the United Kingdom, of which 53,595 have been confirmed negative and 2,626 positive,” says the government. So even those with enough symptoms to test have a very low chance of having coronavirus. Our ignorance should be chilling, but somehow I have filled the empty spaces with comforting hypotheses.

We have seen how drastic disaster planning is. The bill would allow police to arrest those who escape quarantine. Volunteers would have their wages protected if they helped the NHS. The army could be called, certainly to send supplies to hospitals, perhaps to do more. Hundreds of billions of dollars are spent on keeping the economy afloat, in extraordinary haste, when the future is something that no algorithm can tackle.

As the weekend and its uncertainty draw closer, we let ourselves be emptied as much as possible from the houses that were once places of transit and rest, and are now where we keep our stores, work, wandering family members and we make deliveries with a new alien appreciation.

But also, in a city where eye contact seemed a nuisance to some a month earlier, strangers suddenly became aware of each other. Sometimes, so they can keep a safe medical distance. Sometimes, to make sure the elderly get where they need to be on the crowded sidewalk. And sometimes, just to smile, and to enjoy leaving the other person in the queue first.

Faced with the coronavirus epidemic, the Japanese no longer believe it possible to hold the Olympic Games