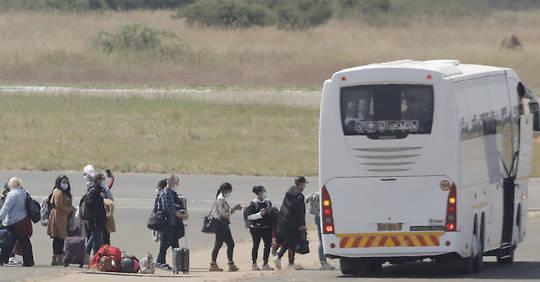 South Africa is currently the country in sub-Saharan Africa most affected by the Covid-19 virus with 38 cases identified, including 14 new announced this Saturday. No death has yet been recorded in the most industrialized country on the continent. But the return to the country of nationals hitherto confined to Wuhan is not to reassure the populations.

The special aircraft with 114 evacuated nationals on board, mostly students, teachers and their families, touched down in the middle of Saturday morning, March 14, at Polokwane airport, in the northeast of the country. ‘South Africa. Mask on the nose, the evacuees left the South African Airways (SAA) Airbus A340 parked one on the airport tarmac, a good distance from the terminal, then were escorted to buses by staff fully wrapped in white coveralls. They were then taken, under police escort with all screaming sirens, to a large hotel complex isolated from the neighboring countryside, also in the province of Limpopo, where they will remain for three weeks in quarantine under strict army surveillance.

“Our children are back,” said Minister of Health Zweli Mkhize on Twitter. The tests for the disease carried out on the returnees from Wuhan were all negative, according to the authorities, but their return to South African soil was greeted with concern by part of the inhabitants of the region. “They are not sick, they have no symptoms. We just bring them home, “said Minister Mkhize,” there is no risk to anyone. ” Residents of the province of Limpopo, one of the poorest in the country, have however criticized this measure, believing that it puts them in danger, especially on social networks around the hashtag “#The Limpopo is not a repository of garbage ”.

“These quarantined people here in Polokwane, that really worries us. We do not feel safe, ”complained to Agence France Presse, a resident of the city, James Whitehead, 42, who is to attend a wedding near the hotel complex where expatriates returning from China are confined. . South Africa is the first country on the continent to carry out a major repatriation operation for its citizens. His government has not yet ordered any closure of public places, travel restrictions or a ban on entry to curb the disease. However, it must meet on Sunday during an extraordinary council of ministers to take stock of the situation.

Africa has so far been significantly less affected than the rest of the planet by the pandemic, with officially 6 deaths for more than 200 cases. But more and more countries in sub-Saharan Africa have reported their first contamination in the past 24 hours, notably Guinea, Kenya, Ethiopia and Rwanda. In southern Africa, a first case was announced Saturday in Eswatini (ex-Swaziland) and two in Namibia. Namibian President Hage Geingob immediately announced the suspension of his country’s air links with Qatar, Germany and Ethiopia and the ban on “large public gatherings” for 30 days.

According to the latest assessment by AFP from official sources, the new coronavirus has infected more than 143,000 people and has killed at least 5,400 people worldwide since its appearance in China in December.