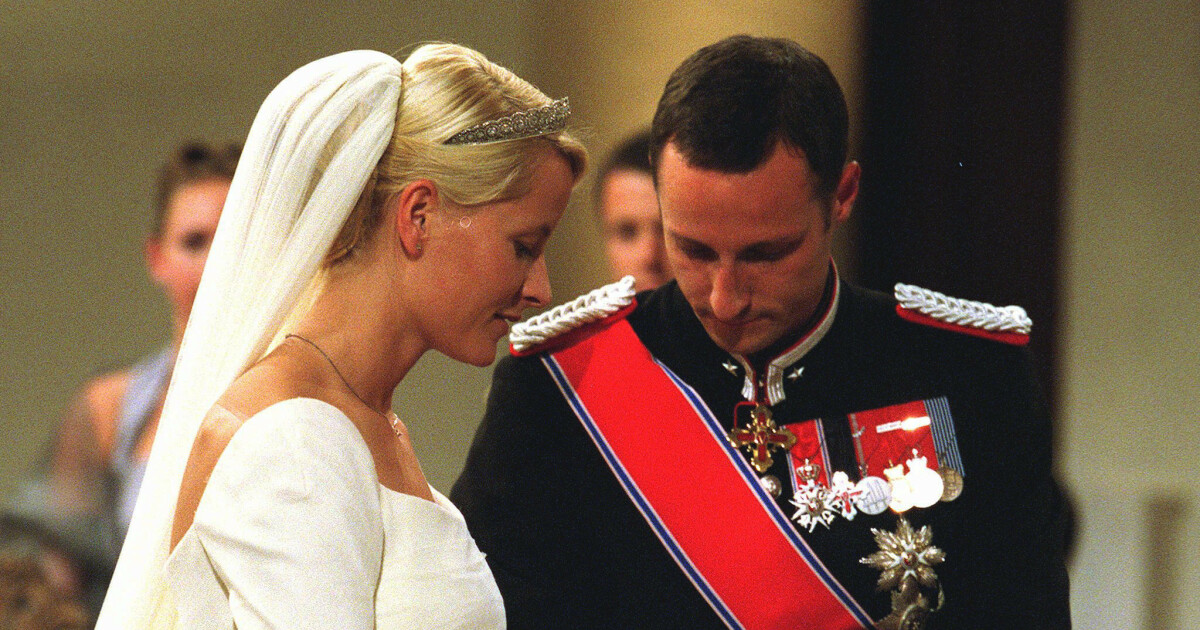 August 25, 2001 – a date for the history books. The streets of Oslo were packed with spectators hoping to catch a glimpse of Crown Prince Haakon (48) and not least his new wife, Mette-Marit (48), who on the wedding day became Crown Princess of Norway.

The adventurous wedding took place in Oslo Cathedral, and while a sea of ​​people showed up outside the church, the wedding was followed by two million people.

Today, the Crown Prince and Crown Princess celebrate 20 years as husband and wife. On that occasion, Mette-Marit shared a photo of her and Haakon on Instagram.

“20 years”, she writes for the photo followed by a heart emoji.

See and Hear royal house expert, Caroline Vagle, remembers the big day well, and says that she never forgets the press conference the couple held just a few days before the wedding.

– There, Mette-Marit opened up about her past. It was incredibly moving and powerful, and I think a lot of critics turned around then. After all, the most important thing was the love between the two, and it was obviously strong, she points out.

The road to the royal wedding was anything but easy. The Crown Prince’s relationship with Mette-Marit from Kristiansand was widely reported in the newspaper Fædrelandsvennen at the end of 1999.

In the summer of 2000, the couple in love appeared hand in hand at the summer festival, and then Dagbladet took the first pictures of Crown Prince Haakon and what would later turn out to be Norway’s Crown Princess.

– The wedding itself was also very moving. The difficult road there, made it even more beautiful. Bishop Stålsett gave a warm and personal speech, and the whole of Norway wiped away tears with the touched bride, Vagle says.

As is well known, Mette-Marit has a son Marius Borg Høiby (24) from before, and the little boy took the country by storm when his mother married the heir to the throne. The royal house expert thought “little Marius” made an impression on the crown prince couple’s big day.

– The very charming little light hair, who probably understood little of what he was suddenly a part of, she says.

The Crown Prince’s wedding in August 2001 was the first royal wedding in Norway since King Harald got his Sonja Haraldsen in 1968.

The royal couple themselves had to fight a long battle for love, before they were finally allowed by King Olav to enter into an engagement – the same year they got married.

With this experience in mind, King Harald (84) and Queen Sonja (84) have previously stated that they have chosen to be very supportive in their children’s choice of boyfriends.

Caroline Vagle believes that Haakon and Mette-Marit’s fight for love, and the demanding start, have only made the relationship and marriage stronger.

– Even though they have had ups and downs like everyone else, they have stood side by side for two decades, she says, and continues:

– To this day, they are generous with kisses, pats and hugs, and they have a flirtatious tone. The Crown Princess just said in an interview that they are different as types, but that it has been good for them. She said he became softer from being with her, and she has learned a lot about being a real human being from him.

– Made an impression on me

Earlier this summer, the Crown Princess told “Summer in P2” that Haakon saw her, understood her, was curious and held her.

The Crown Prince, for his part, said that the Crown Princess insists that the two met at the Quart Festival, while he himself says that they met through mutual friends. He pointed out that his version probably sounds better.

– The bright southern girl made an impression on me. You notice well when Mette enters a room. There is a power there, which is not so easy to overlook. She seemed confident and used to the world, and was nice to talk to. It felt safe when we were together. The fact that she had a small child really only told me that she was not afraid to take on commitment and responsibility. She did not become any less attractive in my eyes for that reason, said the heir to the throne.

ALSO READ: Admits to having “stolen” from Mette-Marit

Revealed, Western Forces Use Israeli Weapons to Hunt the Taliban

Goalball legend is back to help the team