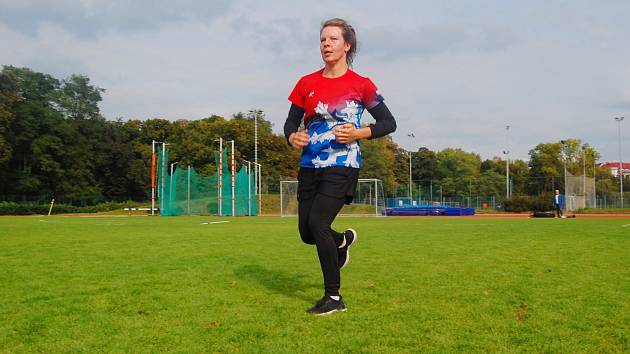 Spastic triparesis is one of the more severe forms of cerebral palsy, which affects both the lower limbs and one upper limb. It is a disorder of the central nervous system that cannot fully control an otherwise healthy body, and the muscles of the limbs become cramped. It changes their position, affects the posture and coordination of the whole body, which manifests itself in problems in gross and fine motor skills. Anička came to her handicap during a complicated birth.

The diary brings a story that was published in the September issue of Kondice magazine.

He explains to me that it could be much worse at the throwing ring – thanks to the fact that he trains practically every day, he is not in a wheelchair today. “My muscles are weakening fast,” he adds.

In addition to training, she also goes to physiotherapy regularly, but she still did not avoid the painful Achilles tendon surgery a few years ago, which complicated her return to running.

That’s why he got to the ball.

The path to throwing balls was no romance about talent and age-old desire. Handicapped athletes are divided into different categories according to the degree of disability. Anička has sprints listed in her athletics and just a ball. When he offers me to try it, I dust off my memories of gymnastics and try to imitate what I saw a few seconds ago with an experienced athlete. It is not possible. At all.

“The sphere is very technical. I prefer running. It is not so difficult to implement. Everything needs to be reconciled here. As soon as one part doesn’t work, the rest doesn’t work either, “Anička reveals to me.

Goosebumps of the Olympic winner. I saw Dad crying for the first time, Sparkler says

During the training, I found her at the new stadium of Spartan athletes Podvinný mlýn, where she trains among Remigiusz Machura’s charges. She is the only one with a disability here. “But she fine-tuned the team. When they saw her running, the healthy ones began to wonder if they would. They did, but they would have to work hard. And they stopped whining, “the coach praises his charge and continues loud enough for Anička to hear:” Anička is a hard worker. Seriously! Sometimes she’d rather slow down, but she wouldn’t. “

The first moments in the team were not entirely happy – the spontaneous reactions of the others from the team were quite indiscriminate, but the coach made it clear that she was behind the new athlete, and Anička quickly proved that there was no burden in the stadium. “It’s good now, the boys and I are used to each other. I would react the same way, I don’t blame them. “

The least romantic part comes when we talk about money. “Czech Paralympians, unlike most athletes from other countries, do not receive any salary from the state or the union, they do not even pay to some stadiums affected, the entry fee for foreign races costs 60 or even 80 thousand, we do not have a team physiotherapist. I won’t even pay for a coach, “Anička calculates the items. Money often goes out of pocket or you simply don’t go to races.

“Sometimes I get something, like shoes. I’m scurrying, so it’ll last me a maximum of half a year. Something will be covered by grants from the Ministry of Education, or my parent Sports Club of the Jedlička Institute helps me. If there’s anything left, I want to give it to the coach. He deserves it, “he says firmly. When I ask her about her sports watch, she answers quite certainly, “You know, I’d rather buy those balls.” Compared to healthy colleagues, she throws the ball a pound lighter. However, even the three kilos will pay off after a few litters and their purchase price and limited service life will surprise me.

See also  When money and fame save lives

Logically, I ask about sponsors. We come to a topic that sounds very cynical to a healthy person. “It will sound disgusting, but I’m a little handicapped to be interesting to them. It’s sad, but in this respect, those who don’t have a leg, are in a wheelchair, are drooling, their disability is obvious at first glance. I look very healthy. I certainly don’t mean that these people don’t need that support. I’d rather not receive anything and be as I am. But it costs me a lot of endless toil. I could cough it up, stop moving, don’t work out, I’d end up in a wheelchair. Then I might be more interesting for the sponsors, but I don’t want to. It’s definitely not worth it to me, it’s just not entirely fair, “he explains sadly how it works in the world of sponsorship.

The only solution seems to be the Paralympic medal. The patrons can already hear about it. So far, any collaborations are more like a barter – the company will send its product, Anička can use it at will for a nice photo. With the money to participate in Tokyo and to prepare, the charity collection helped more.

Paralympic medalist: Counting sparrows on the roof and regretting is not my style

Finance is a burning issue in the family as well. Anička trains daily, she also has a small gym at home. In addition, she is studying at university and her mother would like to see her on a part-time job. “She feels that I can handle it and I should finance the sport myself, I don’t think it’s ever,” says the handicapped athlete.

See also  Place in the team is reserved: Real is still waiting for Carroll's decision / News

The journey from home to training takes her two hours without a car, she stays there for more than four hours, and school… When I ask her about her free time, what she likes to do, what is guaranteed to lift her spirits, she looks taken aback. At first she tells me that she is happy when she is nice outside and she will not be cold in training.

Then he thinks and adds a sentence that he is happy when the training is seen in the results. Then he stops: “I know I should probably say now that I may embroider at home, but it’s more like I’m training, I’m at school or at physiotherapy, and when I’m off, I just don’t do anything. It will help me get out of the carousel for a while and maybe just lie down and watch Netflix, “he admits.

Around 200 children in the Czech Republic get cerebral palsy every year. There are several types of this disease, but they have one thing in common: movement disorders. This can be a problem not only with walking, but also with fine or gross motor skills. The most common form of cerebral palsy is the spastic one, which also suffers from Anna Luxová.