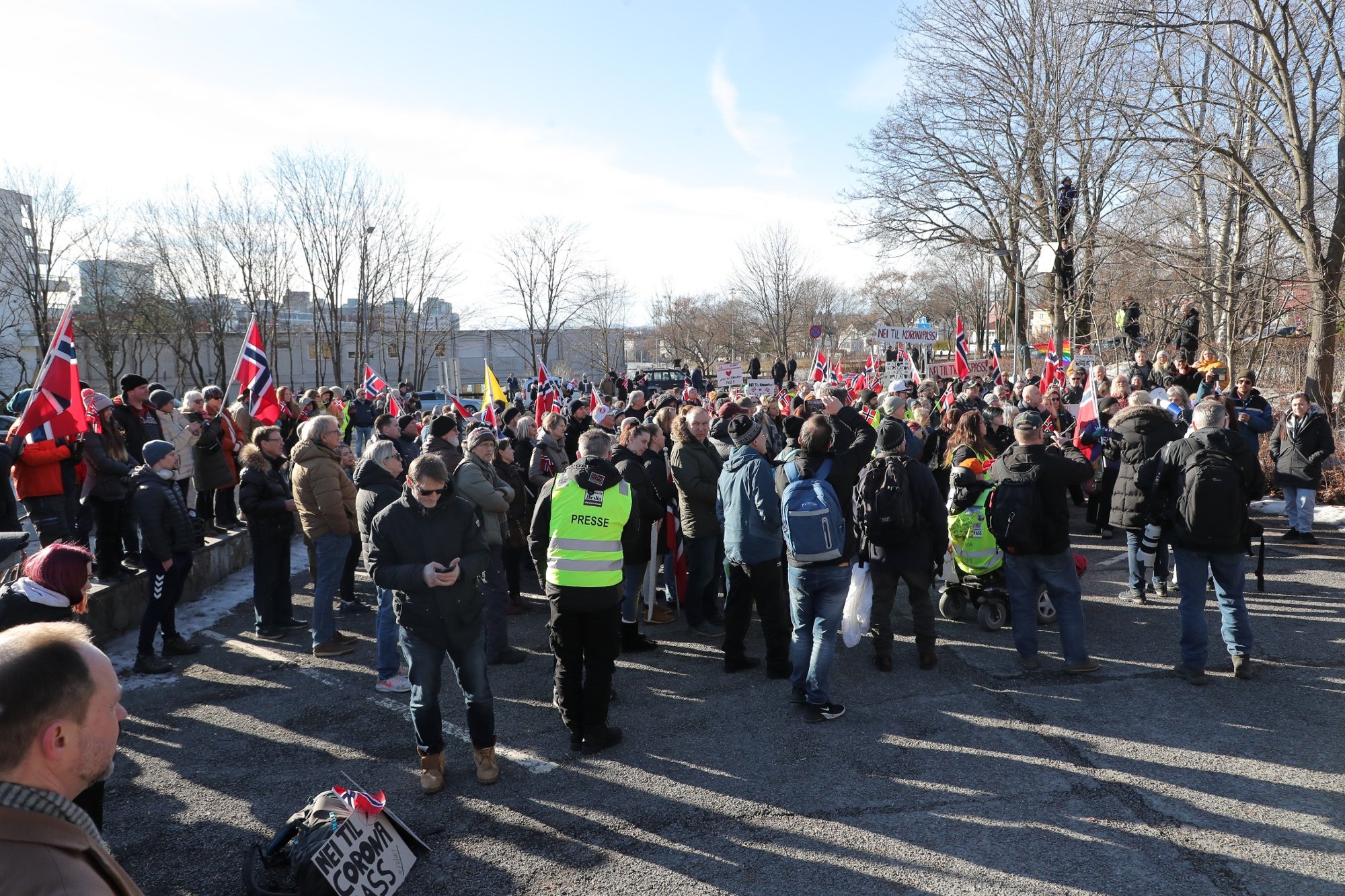 MARIENLYST (Nettavisen): The actions began earlier in the day. “Freedom convoy Norway 2022” had planned to drive in a column to the Storting and from there to NRK at Marienlyst. However, the police put a stop to this, so instead gathered and parked outside NRK on Saturday morning.

The online newspaper’s journalist on site estimated that there were around 200 people who participated.

The action continued on Saturday afternoon in front of the Storting. Around 300 people had turned up at Eidsvolls plass, and everything went smoothly.

The protest group began to gather at Marienlyst around 12 o’clock, and threatened to go down to the Storting if the demands were not met by 16 o’clock the same day.

– We stand in front of NRK today to tell them that we are tired of half-truths. We are tired of misleading statistics and discrimination. For that is what you do, dear media, when you tell Norway daily that we who stand here today are extremists and “anti-waxers”, who will not be allowed to go home for Christmas, said one of the protest leaders in a speech.

The same woman said that they had two requirements: no to a corona passport, and that “all restrictions should cease immediately and permanently”.

However, there have been no restrictions in Norway since the reopening on 12 February. Only general advice to the population is listed on the government’s website.

Around 1 pm, the police were notified that a person had jumped on a car, and that a car involved was backing onto another car.

– There must be a relationship between those involved, who have kept a claim form and were expelled from the place. It was a bit dramatic that it was jumped on a car, as well as a collision, but it became a little less dramatic after a while. We have a patrol on site and have control of the incident, said operations manager Tor Grøttum in the Oslo police district to Nettavisen.

YouTube profile and influences Halvor Harsem was present and documented the collision between the two cars:

He says that there was also a push event at the demonstration, but that it was a little more dramatic in the beginning than what it degenerated into.

– There is no injury and no expulsion. So beyond that, things have gone smoothly, and there are also no traffic challenges in connection with convoys or driving in the city of Oslo, Grøttum says.

The operations manager estimated around 2 pm that around 200-250 people had gathered outside NRK, in addition to the fact that there were also several vehicles.

– The column towards the center is a closed chapter and did not come to anything. It was driven in a column from the meeting places at Ekeberg and in Sandvika to Marienlyst, but for the most part it was about a little over 30 vehicles. It was manageable and did not create traffic challenges, says Grøttum.

Kjetil Myrset had taken the trip all the way from Hønefoss and demonstrated, and said it was to show his opposition to what he calls “compulsory vaccination”.

– It is more reminiscent of a dictatorship and control of people through vaccine passports. And if it ends up that they can refuse me to work because I have chosen not to get vaccinated, then I do not think it is right, he said to Nettavisen.

Historic photos show the first American to orbit Earth on the 60th anniversary of the Mercury Atlas 6 mission.