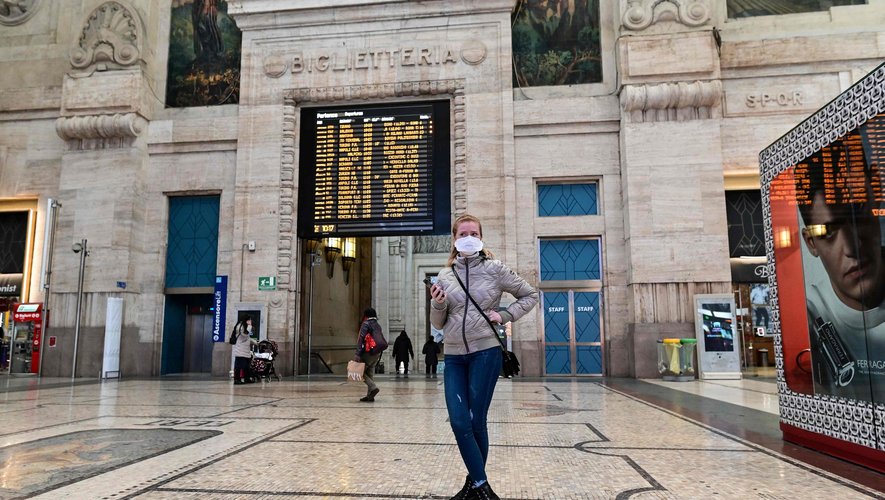 the essential
Two days after Emmanuel Macron’s announcements and while France is preparing to vote, the results of the epidemic are 79 dead in France and 3,661 cases including 175 in Occitania. Closed schools, gatherings of more than 100 people prohibited, state of emergency in the United States and Spain … We take stock.

RATP and SNCF expected Friday a “reduced offer” of transport next week because of the coronavirus because some of their staff will not be able to work, especially to stay at home to look after their children, according to the two groups.
At RATP, “we are finalizing the census of staff with or without children to keep” at home and those “eligible or not for teleworking,” said a spokesperson.

The Paris transport authority “will communicate this weekend” on the traffic that can be provided next week, he added. “There will be a reduced offer compared to normal, with adaptations, either in frequency” of metros, RER, bus or trams, “or a prioritization on certain lines,” he said. SNCF also launched “a census of vulnerable colleagues and those who have no choice but to stay at home to babysit,” said a spokesperson. “If there are fewer staff, there will be fewer trains. The mechanics are known. This logic is fairly close to that of the strike. The first reason will be the impact of the closure of schools and guards And then, as the epidemic progresses, there may be sick colleagues, “he said.

In hospitals, the government has launched the “maximum white plan”, ordering hospitals and clinics to cancel all elective surgery to accommodate the maximum number of coronavirus patients; for this they will have “all the necessary financial means”.
“Ethical support cells” should be put in place in institutions to help doctors who have to choose which patients to treat first if resuscitation services were overwhelmed by the coronavirus epidemic, according to the recommendations of the National Advisory Committee ethics (CCNE).

See also  Is the Air in the House Dry? Place These 5 Ornamental Plants

The situation in Occitania:

US President Donald Trump, accused of initially understating the severity of the coronavirus pandemic, declared a state of emergency on Friday to deal with the crisis. “To unleash the full power of the federal government’s resources, I officially declare a national emergency,” he said from the White House gardens.

The president said the move would provide up to 50 billion dollars to fight the virus.
“I call on every state (in the country) to immediately set up emergency centers” and hospitals to activate their emergency preparedness plans “to meet the needs of the Americans,” added the president, who also announced “a sharp increase” in capabilities to test the virus in the United States. The American House of Representatives approved this Saturday by a large majority a series of measures aimed at mitigating the impact of the coronavirus on the economy of the country. The text was approved by 363 votes to 40. It will have to be approved by the Senate and then be signed by President Donald Trump before coming into force.

The situation in the world:

A state of emergency will be declared on Saturday in Spain, announced Prime Minister Pedro Sanchez. This state of emergency will apply “for a period of fifteen days”. In Spain, the epidemic has left 120 dead and infected more than 4,200 people. “Very hard weeks await us” warned Pedro Sanchez. We can not exclude that we will reach 10,000 people affected next week. “Result: this Friday, many residents were worried border closure with Spain. Cigarette vendors were stormed at the border on Friday.

The president of the Catalan separatist government, Quim Torra, asked the Spanish state Friday for the confinement of this northeast region and the suspension of all maritime, rail and air links to Catalonia. In Barcelona, ​​the capital of this region, the factories of car manufacturers Seat and Nissan will no longer run from Monday for an indefinite period due to supply difficulties.

The last assessment communicated Friday evening by the Minister of Health Olivier Véran revealed nearly 800 new infections and 18 additional deaths in 24 hours, illustrating the acceleration so feared by the authorities. “We are at the beginning of an epidemic of an unknown virus, we have 3661 patients, nearly 800 more than yesterday. As of today, 79 people have died” said the Minister of Health Olivier Véran before adding: “The threat is spreading in 118 countries this evening,” observed the minister.

See also  How long do the symptoms of the Corona virus last?

The situation in France:

In turn, the Olympia announces its closure until April 15. The singer Iggy Pop postpones his tour in France to September. Disneyland Paris will close from Sunday until the end of March. The matches of rugby Top 14 and Pro D2 are suspended until further notice. The decision was made by the National Rugby League which met urgently in the early afternoon on Friday. In soccer, The Professional Football League has acted this Friday morning “the immediate suspension” and “until further notice” of Ligue 1 and Ligue 2 because of the epidemic of coronavirus. Initially, the matches were held behind closed doors until April 15. The Eiffel Tower has been closed since Friday evening. Ditto for the Louvre and the Palace of Versailles. In Andorra, decision has been made to close the ski resorts.

GO FOR GOLD! The GB boxing team IN THEIR OWN WORDS about Tokyo 2020 QUALIFICATION – SecondsOut