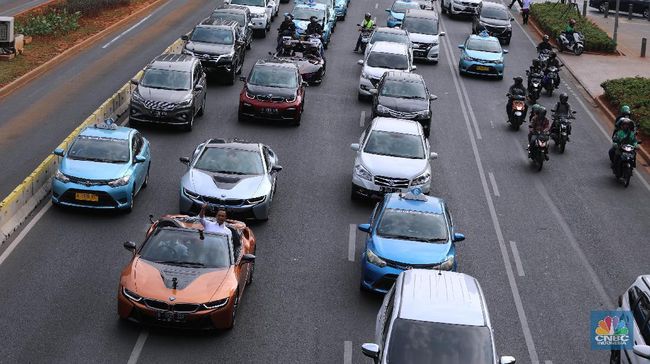 Jakarta, CNBC Indonesia – The Ministry of Finance encourages the acceleration of the development of Battery-Based Electric Motorized Vehicles (KBLBB). There are a series of “discounts” given by Minister Sri Mulyani Indrawati so that they can make the price of electric cars cheaper in the future.

Based on Minister of Finance Regulation Number PMK-13/MK.010/22 concerning Stipulation of Goods Classification System and Imposition of Import Duty Tariffs on Imported Goods, this policy will take effect 7 days after its stipulation, which means March 1, 2022.

Previously, the government had issued a number of incentives to encourage the use of KBLBB. For direct consumers, the incentives are in the form of zero percent PPnBM, a maximum local tax of 10%, a minimum down payment of zero percent, and a low interest rate. Furthermore, the manufacturing industry is given a tax holiday, tax allowance, and super tax deduction for research and development.

“This incentive will make the KBLBB industry more developed because it will reduce production costs and encourage the industry to produce KBLBB by utilizing goods that have been produced domestically so that vehicle prices are more affordable for the community. The development of the KBLBB industry will increase investment, save energy consumption in particular fuel oil (BBM), environmental quality, and encouraging mastery of technology. This is expected to be able to make Indonesia a production base and export hub for electric motorized vehicles,” said Head of the Fiscal Policy Agency, Ministry of Finance, Febrio Kacaribu in a written statement, Tuesday ( 1/3/2022).

The government already has a roadmap for the development of the automotive industry in the medium term, namely 2020-2030, where the focus is on the development of electric vehicles and their main components such as batteries, electric motors, and converters. The provision of zero percent import duty incentives is expected to further encourage the achievement of these targets. In 2035, Indonesia is targeting 1 million electric four-wheeled vehicles or more and 3.22 million two-wheeled electric vehicles.

“The room for growth in the market share of domestically produced electric motorized vehicles is still very large in Indonesia. In addition, world demand for KBLBB also continues to experience a significant increase. Government policies will continue to be directed to help make good use of this space in line with the expected stronger economic recovery. forward,” he explained.

New emojis and features are coming to WhatsApp soon

Sick Jairon (14) was dead in bed for at least a month, father summoned spirits instead of doctor – Eindhovens Dagblad