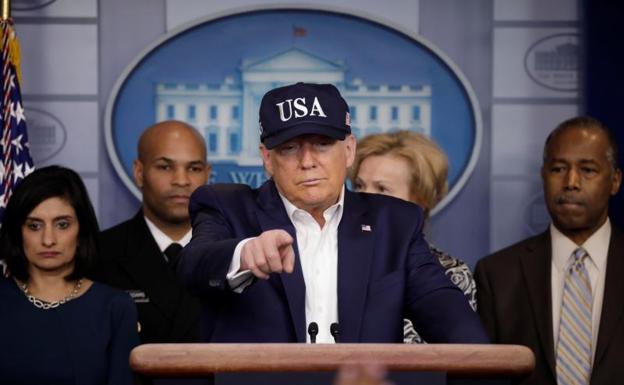 US President Donald Trump negative after finally submitting to the coronavirus tests this Saturday to check if he was infected or not, having recently been close to someone who later turned out to be infected. One of them is the communication secretary of Brazilian President Jair Bolsonaro, who was in Washington this week on an official trip, and also another member of the same diplomatic delegation.

At a press conference from the White House, Trump explained that the test was done because the journalists asked him insistently because he still did not do it. “They have sent him (the test) to a laboratory” and the results will be “in a few days,” said the controversial 73-year-old president at first, although a few hours later the presidential doctor, Sean Conley, said that he had already received “confirmation” that he had “tested negative.”

The news of the contagions of the Brazilian delegation also brought senators Rick Scott and Lindsey Graham, in addition to the mayor of the city of Miami, Francis Suárez, to undergo quarantine Voluntary having been in contact with its members.

Along the same lines, the White House announced that it will take the temperature to all those who are close to Trump and to the vice president of the United States, Mike Pence, appointed by the chief executive officer responsible for all the special operation against COVID-19. “As a precaution, they will now take place temperature controls to anyone who is in close contact with both, “said one of the presidential spokesmen. Among the first to take these tests are the journalists who went to the White House on Saturday.

However, the president now wants the rest of the country to follow in his footsteps. “There will be a free trial for all Americans. No one will have to pay, “he said at a press conference from the White House, without a tie and with a cap with the initials USA. “It is a lot of money and it is quite a complex test,” he said, although he then added “that people do not worry” because “there will be more than 50,000 million (dollars) to fight the coronavirus” after the latest package of economic measures approved by the Federal Administration and which already has the support of the House of Representatives, waiting to also endorse it in the Senate.

In addition, Trump explained that the federal coffers also will cover the sick leave of those affected. “We will also pay the permits (of the sick). We are going to help everyone, “said the president, who said that” we are preparing for the worst case scenario. ” “We are going to get out of this peak (in infection),” he concluded.

On the other hand, and after vetoing the US for at least a month, flights from continental Europe such as precautionary measureThe White House announced that it will suspend all travel to the United Kingdom and Ireland from midnight on Monday. “They have been quite active, unfortunately,” said Trump, referring to the British Isles: “We want this to end; we don’t want a lot of infected people. However, Pence, their ‘number two’, clarified that “in the countries with which we have suspended travel, Americans and legal residents may return,” although they will have to be quarantined upon arrival.

A day in Papago Park

Two blind residents hit by the golf cart in the Villages