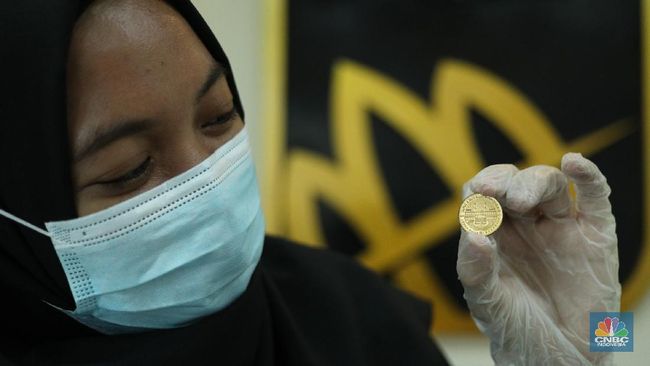 Jakarta, CNBC Indonesia – World gold, which is still “unsettled” in determining the direction, made Antam’s gold price fall again on Tuesday (27/7/2021). Gold bullion produced by PT Aneka Tambang (Antam) Tbk. this is at the lowest level in the last 3 weeks.

Launching data from the official website of PT Antam, logammulia.com, the price of gold bullion fell by Rp. 2,000/gram. Gold weighing 1 gram is sold at Rp 940,000/bar, a percentage decrease of 0.21%.

PT Antam sells gold bars from 0.5 grams to 1,000 grams. However, the selling price does not include 0.9% tax for purchases without using a Taxpayer Identification Number (NPWP), and 0.45% with a TIN.

Where the world’s gold will go will only become clearer after the central bank of the United States (US) or the Federal Reserve (The Fed) announced monetary policy on Thursday morning Indonesian time. This means that before the announcement, world gold will still be “unsettled”, Antam’s gold will also find it difficult to strengthen again.

See also  Because of the dust | RTL News

Gold prices will benefit if the Fed indicates it will not taper or reduce the value of the asset purchase program (quantitative easing/QE) in the near future. Especially if the Fed gives a signal that the US economy is at risk of slowing down due to the latest spread of the delta variant of the corona virus.

In other words, the Fed is behaving dovish.

“The dovish attitude of Powell and his colleagues will be a positive sentiment for gold prices,” said Carlo Alberto De Casa, analyst at Kinesis, as quoted by Reuters.

But on the other hand, if there is a tapering signal in the near future, gold is at risk of collapsing.

Analysts from the Commonwealth Bank of Australia (CBA) predict the Fed will provide a timing signal tapering it is already near.

“We expect the monetary policy-making committee (FOMC) to omit the word ‘substantial’ from ‘further substantial progress’ in its policy guidance,” CBA analyst Joseph Capurso wrote in a note to clients. 2021).

“Eliminating the word ‘substantial’ will be a signal that the FOMC believes it will reduce the value of QE in the near future, and an official tapering announcement will be made in September,” he added.

The split in the opinion of the analysts made the world gold price “unsettled”, and Antam’s gold fell slowly.