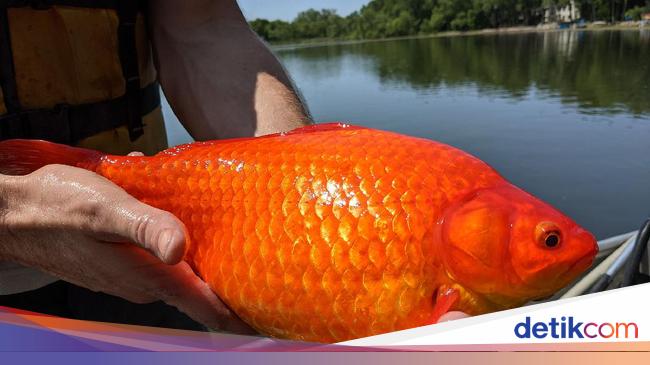 Ornamental goldfish look interesting to keep at home. However, it turns out that if dumped or released into lakes or rivers, these goldfish can grow very large and become a dangerous problem for the environment.

This case occurred in Burnsville, Minnesota, United States, precisely on Lake Keller. Authorities there said several giant goldfish were found in the lake. Called giant because unlike when kept in an aquarium or the like, this goldfish can grow up to 38 centimeters.

Whereas goldfish kept in home aquariums usually grow only up to about 5.1 cm. It is suspected that the goldfish was dumped carelessly by the residents who originally kept it.

The local city government has warned residents not to do so as goldfish can contribute to water quality degradation by ruffling sediments and uprooting plants. In other words, this giant goldfish is considered a pest.

“Please don’t release pet goldfish into ponds or lakes. They grow bigger than you think and contribute to poor water quality,” they wrote on Twitter, complete with a photo of the jumbo-sized goldfish.

Dozens of these giant goldfish have been caught. Currently, we are trying to calculate how many goldfish are in the lake. “We’re getting reports from residents of several large carp groups. Some have seen them from boats,” Caleb Ashling, the city’s environmental expert, said.

“It’s surprising that these fish can grow so big. They’re not like the ones you’re used to seeing in pet stores,” he was quoted as saying detikINET from CNN, Friday (16/7/2021).

On the one hand, goldfish are attractive as pets, but are considered bad for the environment if released. “All goldfish are basically invasive species all over the world. Across North America, Australia, parts of Europe, they’re really widespread,” said Przemek Bajer, an academic at the University of Minnesota.