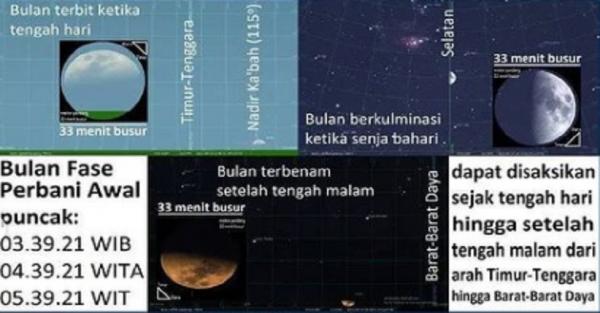 According to a report by the National Institute of Aeronautics and Space (LAPAN), there are at least 7 astronomical phenomena that will occur in the third week of September. Anything? Quoted from LAPAN’s Instagram, here are the details.

1. Early new moon phase
The peak of the early new phase occurred on September 14, 03:39 WIB. So that this early new moon can be seen when it rises at noon from the east-southeast. Then it culminates in the south at sunset and then sets in the west-southwest at midnight.

2. Mercury’s maximum eastern elongation
The peak of this phenomenon occurs on September 14, 2021 at 11.11 WIB. So that it can be seen from the west-southwest direction near the constellation taurus since 20 minutes after sunset for 75 minutes.

3. Neptune’s Opposition
The peak of Neptune’s opposition occurred on September 14, precisely at 16.28 WIB. Neptune can be seen from east to west near the constellation Aquarius from 20 minutes after sunset until 20 minutes before the sun tomorrow.