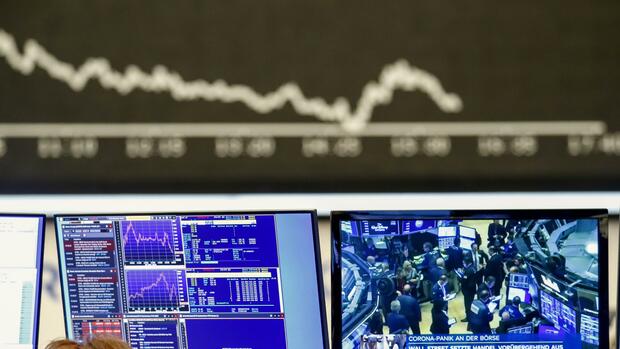 Despite the corona spread, Deutsche Börse is currently not planning to close the trading hall in Frankfurt.

Düsseldorf / Frankfurt In view of the almost historical price losses on the German stock market, analysts compare the current situation with the events during the financial crisis 2008/2009. The question is: will the coronavirus have similar consequences?

Since the financial crisis, regulation and financial risks have been handled completely differently than before 2008. And since it is unlikely that the virus will be completely eradicated, the question is: Do we have to get used to annual corona waves – including the side effects: fewer trips and hardly any more Major events in these phases?

The gross domestic product is likely to be correspondingly lower. “The answer to this could hardly be more exciting,” says Commerzbank analyst Thu Lan Nguyen.

Most capital market strategists already provide an answer after today’s price slump: the markets could sink even further. Specifically, the DZ Bank: Equity chief strategist Christian Kahler believes it is possible that the Dax will drop to 8000 to 8500 points. He draws on patterns in past recessions. DZ Bank assumes that companies in the Dax will earn ten to 20 percent less this year than in 2019.

With regard to the course of the year, strategists are surprisingly optimistic. DZ Bank sees the Dax at 11,500 points at the end of the year. Although this is significantly below the previous price target of 13,200 points, it is also significantly above the current level.

The fund house DWS has lowered its Dax forecast from 14,000 to 13,000 points at the end of the year. But the forecasts are based on the optimistic assumption that the number of new infections in both Europe and the USA will have peaked in the second quarter. Nor should there be a second major contagion wave in Asia.

In its core scenario, DZ Bank also assumes that the consequences of the corona virus only trigger a temporary supply and demand shock from an economic perspective. But that’s exactly the question: the virus and the quarantine measures are unprecedented and therefore difficult to calculate.

Johanna Kyrklund, chief investment strategist at the British wealth manager, describes the current mood on the stock markets Schroders, so: “The problem is uncertainty. Investors could deal with bad news, but the situation is still far too unclear. ”Nobody can quantify how quickly the virus spread and how great the damage caused by Corona is.

Despite the spread of corona, Deutsche Börse is currently not planning to close the trading hall in Frankfurt, as a spokesman explained. However, the company lifted the presence requirement for the dealers on the floor on Tuesday. The specialists can now also trade from other buildings.

Deutsche Börse is therefore pursuing a different course than the Chicago Mercantile Exchange (CME). The world’s most valuable stock exchange has announced it will close its trading rooms late this week. The New York Stock Exchange remains open, but has restricted access to the trading room.

Trading on the German stock exchange functions smoothly despite high swings and sales, the spokesman emphasized. The majority of trading does not take place on the Frankfurt Stock Exchange, but on the Xetra electronic trading system. There, the trading volume when the price slumped on Monday was 16.9 billion euros higher than the day after the Brexit vote in June 2016.

To ensure that trading can continue to run smoothly and be monitored, Deutsche Börse has also taken internal precautionary measures. In the operational area, the company has now divided teams, the spokesman said. Should an employee of one team become infected, the other team could take over and continue to operate. The European financial market supervisory authority Esma also warned of such measures on Tuesday.

More: Here you can read everything about the current Dax development

Exchange: Dax below 10,000 points: the final phase of the sell-out