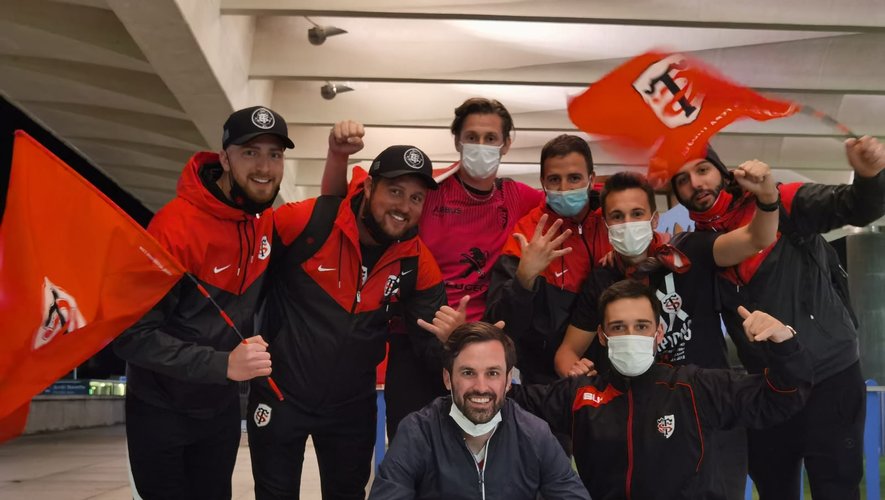 the essential
Forty Stade Toulousain supporters were present late at night, or early in the morning, to thank their players after the Champions Cup final won. A small contingent still giving voice on the forecourt of the airport.

We could have expected a jubilation of great evenings, like the one which invaded the Place du Capitole in 2010 after the success in the Heineken Cup … but the health restrictions decided otherwise. Few people to welcome the Stadistes at Toulouse airport, after their victory in the Champions Cup final on Saturday 22 May against La Rochelle (22-17). No walkabout at the exit of the flight of the neo-European champions, who arrived this Sunday, May 23, two hours late, at 3 am.

A few die-hards have nevertheless moved to catch a glimpse, if only for a few moments, of their evening heroes. This is the case of Florent and his band of friends, who arrived two hours early. “We lived a real moment of cohesion, it was incredible” says Florent, who had reserved a table in a bar for the event. His friend Loïc, present at the stadium during the last European final of the Stadium in 2010, welcomes “a new generation which is materialized by titles”. Enthusiastic, he even announces “a great decade” to come for the Rouge et Noir.

The group of friends, however, is sorry for the lack of people at the airport. Strolling through the terminal, Yann even had the impression of “robbing a bank”. They can thank the leniency of the police, exceptionally authorizing the presence of supporters.

Among these fans, a distinguished guest, in the person of Silvio Renda. The father of young Simon Renda. If he did not take part in the meeting, the 20-year-old winger inevitably arouses the pride of his dad. “His brother is impatiently waiting for him, and then inevitably, his whole family,” said Silvio Renda, who watched the match with his relatives, moved.

Once out of the hall, the trophy in hand for Antoine Dupont, the kisses and hugs with the few supporters go well. To the cries of: “Toulousain, Toulousain, Toulousain”. With a smile on his face, the scrum-half confides in the Dispatch wanting to “share that” with lovers of the Stadium. The same goes for Romain Ntamack, who regrets “not being able to party in the streets of Toulouse”.

After an improvised photo shoot on the airport forecourt, with the Cup, the Stadistes return to their bus and the supporters to their cars … for a well-deserved rest.