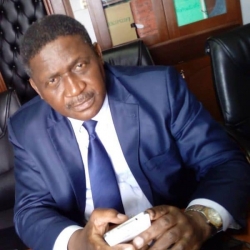 The Secretary General of the Ministry of Communication, Professor Félix Zogo, knocked out the President of Fecafoot, Samuel Eto’o fils, this Sunday, February 20, 2022 during the debate program “Club d’Elites” on Vision 4 television .

“Minsep – Fecafoot: the eternal standoff” was one of the themes proposed by the channel to its guests. It was therefore a question of playing the extension of the quarrel which opposes the day after CAN 2021, the Cameroonian Federation of football under his supervision, the Ministry of Sports and Physical Education about the future of the national coach of the Indomitable Lions, Antonio Conceicao.The Minister of Sports, Professor Narcisse Mouelle Kombi had declared a year ago week, that he renews his confidence in the Portuguese technician despite the fact that the objective was not achieved at the end of the 33rd CAN.Samuel Eto’o and his peers from the Executive Committee of Fecafoot informed After a meeting of the body held last Wednesday in Limbe that they did not agree with the Minister of Sports, the members of the Executive Committee had then given a short deadline to their leader to decide on the future of the technical staff of the Indomitable Lions. This attitude of Samuel Eto’o fils et Cie of wanting to force the hand of their tutelage has put Professor Félix Zogo out of his hinges. The great state clerk predicts that the standoff thus engaged by the one who has held the reins of Fecafoot for only two months will end in failure for his camp.

“Everything Samuel Eto’o has touched since the end of his career has ended in failure… In 2019 he brought us two Playboys here, namely Clarence Seedorf and Patrick Kluivert, as coaches, We know what happened to it. His own business when he wants to do business has failed… Fecafoot is above what Samuel Eto’o is worth. He has an object in his hands which he does not yet have the ability to master. Football in Cameroon is not a technical matter. It’s a socio-political issue,” said the senior official.

At the end of this week, last Friday precisely, our colleague Georges Djougueli of the weekly Jeune Afrique, reputed to be close to Samuel Eto’o, revealed that the new president of Fecafoot wants to appoint Rigobert Song to the position of national coach Cameroon team replacing Antonio Conceicao.

“The name that came out, from you to me, what are its achievements. A former player that we adore but from there to being the coach of the Indomitable Lions, this proves that the president of Fecafoot is not in his place ” reacted Félix Zogo.

After listening to the SG of MINCOM, our colleague Georges Dougueli became a defender of Rigobert Song in order to tackle Félix Zogo as well.

“Respect for Captain Courage. Journalism is like the army. We are respected there for our feats of arms. May those who know FÉLIX ZOGO edify us on his own … (The one who mentions his doctorate is blocked). Meanwhile, in terms of football, everyone knows Rigobert Song: 137 selections (recordman), four participations in the World Cup and eight African Nations Cups including two victories in 2000 and 2002. another to merit the consideration of our arrogant decretal fabrications? wrote the JA reporter.

Below, excerpt from Félix Zogo at Vision 4 this Sunday at the end of the morning.

From triumph over Real to failure against Nantes: PSG has fallen in France

Insurance: when an illness increases the premiums to be paid