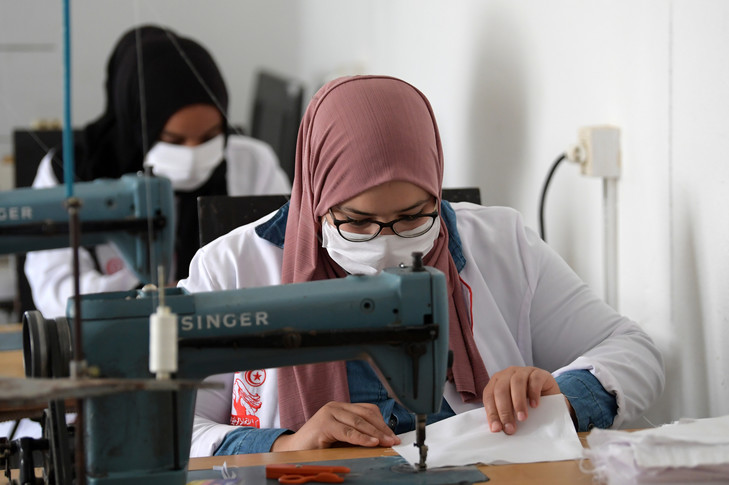 “There remains a desire to lock up women in Tunisia. “ The lawyer Monia Ben Jemia takes as proof the sexist decree of the government, published on the night of May 2 to 3, providing for the maintenance in “Total containment” several categories of people, including mothers with children under the age of 15, when economic activity resumes, starting Monday, May 4, with 50% of the workforce in most sectors.

→ LIVE. Coronavirus: the latest information and France and worldwide

Faced with the outcry caused by the mothers staying at home, the President of the Republic published, Sunday afternoon, a corrective statement excluding mothers from confinement but not children under 15 years of age.

“It was the women who fed Tunisia during the confinement”

“This misogynistic measure was unconstitutional”, denounces Monia Ben Jemia. The Tunisian Constitution of 2014 enshrines “The equality of all citizens in rights and duties”. And according to article 46, the state “Is committed to protecting the acquired rights of women and seeks to consolidate and promote them”.

“It was also to make very little of the fact that it is the women who work in the fields and fed Tunisia during the confinement, it is also they who make the masks in the textile factories, it is they who still there are many doctors and nurses “, Mona Ben Jemia list.

The government, in retracting, invoked an error which would have slipped into the decree. “But the Minister of Health, Abdellatif Mekki, member of the Islamist party Ennahda, had justified the measure”, strangles Yosra Frawes, president of the Tunisian Association of Democratic Women (ATFD). On May 3, the minister said on the radio that it was natural for mothers to babysit. It was, according to him, “In accordance with our tradition and our culture”. “He even insisted, adding with a laugh that it would be caricatured to ask the men to stay at home, deplores Yosra Frawes. This tendency to want to Islamize the country exists in the government, and even if some resist, the Prime Minister had signed. “

The private area is “A favorite space of the Patriarchate”

By amending the decree, the government did not solve the problem, she said. As nurseries, schools, colleges and high schools remain closed, many women are forced to babysit. “In the public sector, they are dependent on the goodwill of their hierarchical superior who can exempt them from work; in the private sector, no provision has been made, but they are often employed without contract or rights, so babysitting will very often mean that they will lose their jobs “, fears Yosra Frawes, who adds that nothing has been planned either for single-parent families made up mainly of women with children.

Even before the publication of this decree, ATFD was concerned that containment had “Freed retrograde words, pushed women to be returned to private space, to be constantly monitored, and often abused.” However, private space is “A preferred space for patriarchy”, said the Tunisian Association for the Defense of Individual Freedoms (Adli). In its report on the year 2019, published on April 21, the association pointed out that women “Have been victims of a particular relentlessness depriving them of their fundamental rights”.

The late designer was reflected in the Toyota crossover