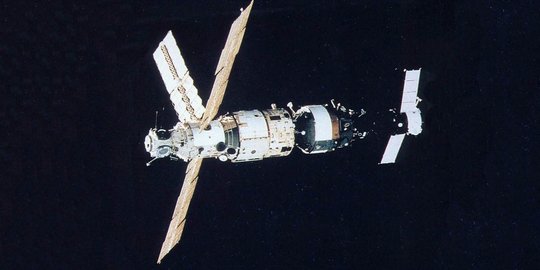 “This is Astronaut Dale Gardner holding a “For Sale” sign. A tone of sarcasm for the Palapa B2 satellite because it was purchased by the Sattel Technologies (California) company from the Indonesian Government when this satellite was in orbit“

Check the facts merdeka.com traces this information. As a result, the information is incorrect.

In a turnbackhoax article entitled “[SALAH] The picture “This is the Story of the 1984 Indonesian Satellite Tragedy PALAPA B2” on November 29, 2021, explained that the Palapa B2 satellite was sold because it failed to orbit.

A satellite project costs a lot and has a very large risk factor, therefore it is necessary to carry out insurance activities. Likewise, the Palapa B2 satellite is also covered by insurance. When the launch failed, the insurer paid a launch insurance claim of US$.75,000,000 to the Indonesian government and it automatically became theirs.

Then the insurance company sold the B2 satellite and it was purchased by Sattel Technologies (California) while it was in orbit, then contracted with NASA to retrieve it. Sattel also contracted with Hughes Aircraft Company (original manufacturer) and McDonnell Douglas (launch service provider) to be updated and repaired. After repairs the B2 satellite was bought back by Perumtel (Indonesia) which had concluded an agreement with McDonnell Douglas to launch the B2-R palapa satellite (changed name from B2 to B2-R (Recovery)) using a commercial version of the McDonnell Douglas Delta II rocket which was successfully launched in April 1990 from Cape Canaveral, United States.

Don’t be easy to believe and check every information you get, make sure it comes from a trusted source, so it can be justified. [lia]

A lawyer suspected of having smuggled drugs in Saint-Gilles prison