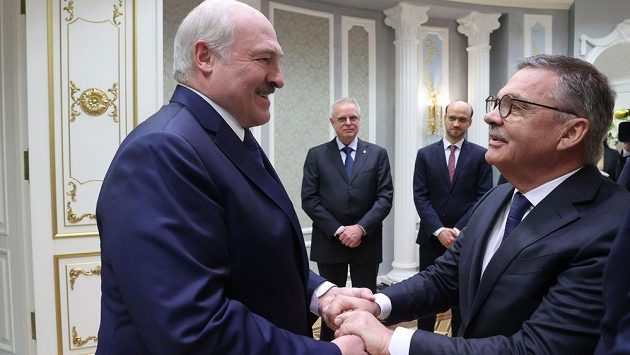 The coronavirus pandemic canceled last year’s World Cup in Zurich and Lausanne. This year’s clash of the best hockey teams is scheduled for May 21 to June 6 in Minsk and Riga.

But in Belarus, which hosted the championship in 2014, the situation worsened not only due to the covid-19 epidemic. Protests have been taking place since the summer against the despotic regime of President Lukashenko, which has been pushing very hard with the help of the police and special forces. The security situation in Minsk remains very tense. Cases of torture of detainees have been reported from prisons, and unmarked masked men roaming the streets, abducting people.

“The IIHF is concerned about Minsk’s ability to organize the tournament safely. There is unrest in the country, which is a source of concern for teams and fans,” Fasel summed up his impressions of his visit to Belarus.

He has been President of the IIHF since 1994, when Lukashenko also became President of Belarus. He now welcomed Fasel in Minsk with a bear hug … “I was embarrassed to myself, but that does not mean that I approve of the repression in Belarus,” said the former dentist.

However, IIHF Vice President Fin Kalervo Kummola stated in September that it was not possible to go to Minsk for the World Cup.

We will easily organize the championship ourselves, Lukashenko told the head of the IIHF

“I have now confirmed my opinion. A lot of people say that politics and sport should not be mixed, but Lukashenko hurt the idea the most. For him, sport and politics are the same,” Kummola said.

The obedient are rewarded by the Belarusian dictator, the rebels often end up beaten and behind bars, as was known, for example, by the former excellent basketball player Jelena Levčenková.

“The photos from the meeting outraged me, but they did not surprise me. The gentlemen know each other well,” Kummola told the Finnish media. Canadian politician Chris Alexander then even called for Fasel’s resignation.

However, the visitor to Minsk did not find a stop even at home, where he was also criticized by deputies. According to them, their compatriot probably did not realize that the Belarusian regime imprisoned, among others, a 51-year-old Swiss citizen Natalia Herrsche, who resisted arrest during a demonstration in Minsk and removed one of the police officers’ mask … She was subsequently sentenced to two and a half years.

Even more disgust was caused by Fasel’s photographs of the head of Belarusian hockey, Dmitry Baskov, who is suspected of being directly involved in the assassination of activist Roman Bondarenko. Fasel and Baskov were to watch the KHL duel between Minsk and Magnitogorsk together on Monday. The 70-year-old head of world hockey is under heavy fire.

In the meantime, the IIHF is negotiating a possible transfer of the championship to Slovakia. The Danes also offered themselves. It is said that the Latvians would be able to organize the World Cup themselves, just as they succeeded in 2006.

If the organizers of Minsk remain, where the Czechs are also to play, then some hockey federations are openly talking about a boycott of the championship.