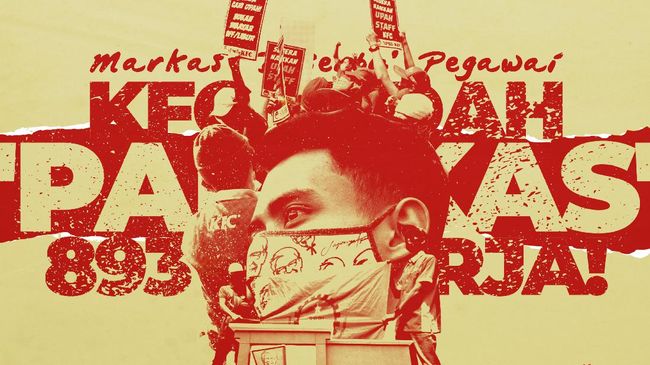 Jakarta, CNBC Indonesia – The fast food restaurant business is one of the sectors most hit by the waves of the Covid-19 pandemic. KFC classmates were also very strongly affected, even the workers took action on April 12 because they thought the company was not carrying out its obligations properly.

Most recently, the Indonesian Workers Struggle Solidarity (SPBI) of PT Fast Food Indonesia Tbk said the company had started to respond to the action. However, it turns out that not all have been realized, including the issue of the 2021 THR.

“There are no demands yet. Regarding wages and normal working hours, management has accepted the acc (received) by the management,” said SPBI Coordinator Anthony Matondang, to CNBC Indonesia, Sunday (18/4/2021).

Previously, the demands from the SPBI were that PT Fast Food Indonesia Tbk explained that in April 2020 the company issued a policy of wage cuts and withholding. In fact, holiday allowances (THR) are also not paid under the terms of a collective labor agreement (PKB).

As a result of this policy, some KFC workers earn below the city or district minimum wage in 2020.

In addition, the sole franchise owner for the KFC brand has also issued a policy of postponing payments for birth, death, marriage and tenure awards.

Anthony explained that after the action, KFC management immediately issued two new letters regarding wages and working hours. Also a letter regarding the period of time involved in the action must undergo a PCR test at their own expense when entering work, or lead to dismissal if they cannot show it. This is a pressure for workers, especially since the cost of PCR is not cheap.

“The matter of PCR can be reimbursed. Initially, PCR costs must be independent / independent. Because our report to the Director General of Binwasnaker and media reports can finally be reimbursed,” he explained.

Meanwhile, there are two other demands that have not been resolved. Anthony explained, namely the matter of holiday allowances (THR) as well as an increase in staff wages to allowances and rewards for tenure.

“Regarding the THR, the info is not in accordance with the PKB, only one wage, we plan to report it to the Directorate General of Binwasnaker and want to plan further actions and report it to Yum International,” explained Anthony.

“While the issue of staff wage increase is also not clear, it will be a complaint as well, as well as the right to benefits and appreciation for working time,” he added.

Anthony explained that the THR which was not in accordance with the KFC collective work agreement (PKB) would be brought to justice. It was explained that according to PKH, KFC employees should receive THR of one and a half times the wages for a work period of more than two years, and one three-fourths of the salary for a work period of more than 20 years.

“Only the THR which is not in accordance with the KFC PKB will be sued, the information is that the Indonesian Fast Food Workers Union (SPFFI) has made another agreement about the THR with KFC, so we emphasize that it should not be applied to SPBI members, if it is enforced we will continue mass action,” explained Anthony.

See also  As after the amnesty: prisons were emptied within a year, also due to coronavirus. We have data

From the previous reports, it was explained that SPFFI is part of the SPBI.

Previously, the Director of PT Fast Food Indonesia Tbk Justinus Dalimin Juwono had opened his voice about the action. He emphasized that the workers who demonstrated yesterday did not represent the voice of the KFC restaurant workers union throughout Indonesia.

“That’s another union, which we don’t know. We have the Indonesian Fast Food Workers Union (SPFFI),” Justinus told CNBC Indonesia, Tuesday (13/4). SPFFI is a labor union that is a member of the SPBI.

It’s not just KFC that is ‘rocking’, nowadays many restaurants are closing down every day. In September 2020, the Indonesian Hotel and Restaurant Association (PHRI) made a survey stating that the number of restaurants permanently closed reached 1,100.

“Nobody wants to open again yet, meaning that now my prediction has increased to 1,600 restaurants in malls and outside malls throughout Jakarta. This situation is not improving but there is no movement, sales are not growing, flats. The cakes are getting smaller,” Deputy Chairman of PHRI for Restaurant, Emil Arifin, told CNBC Indonesia, quoted on Monday (19/4).

He said the cake was shrinking because many new entrepreneurs opened up businesses in the food sector and sold them online. In fact, many former restaurant employees have started running other businesses. They opened a business because they no longer worked in restaurants and did business in order to survive.

“I was also invited, just come to my place, now selling fried rice. They are still small but they can eat from their sales that day, so they don’t have to look for (work) anymore,” he said.

Emil said that many employees were dismissed because business actors were no longer strong enough to withstand the burden of employee costs. In order to survive, many restaurant business actors have finally chosen to close many outlets and open some of the restaurants that are considered to be the most prospective.