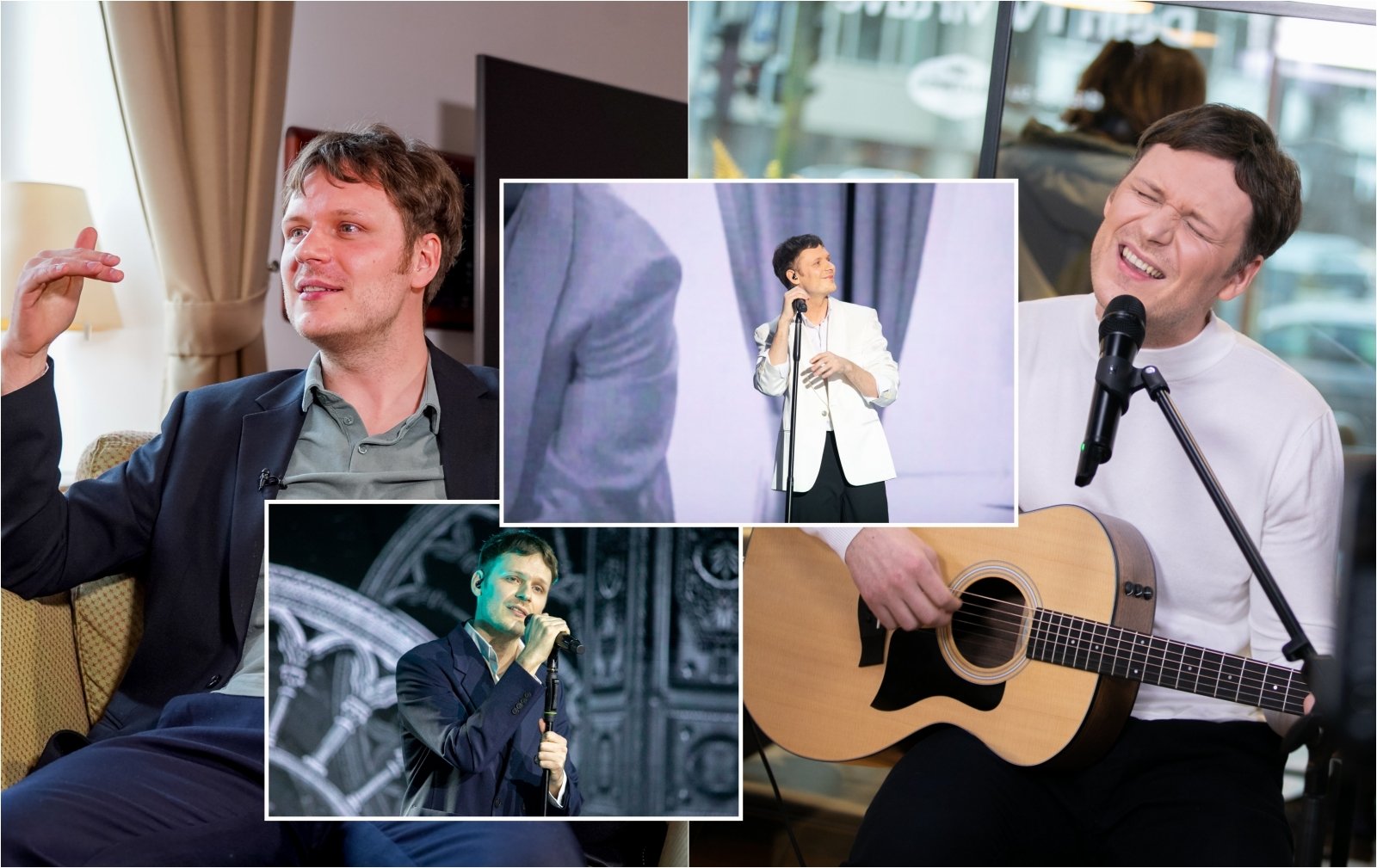 Tautvydas spent his childhood in Plungė. A little later, the famous artist moved to Vilnius and then spent some time in cosmopolitan London. According to FC Baseball, it has become more comfortable in larger cities.

“The place where you grew up left an unmistakable mark. I remember when I came to Vilnius to study after school, there was such tension. We immediately felt that we were from another world. A turning point in my life came When I was studying in London, I came back and Vilnius became so simple for me, ”said the scene. We went to all the bars I was allowed to enter, and when I came to Vilnius to study, I realized that I had entered where I did not have to enter, and I flew to London a year later. to study. ”

FC Baseball made sure that initially the big city didn’t feel its own – it had no friends, it had to start all over again. According to the scene, Plungė is like a sanatorium compared to London. But London seems to have tamed London over time.

“We had a lot of fun. Then I dropped out of university in London – I studied for two years, and I didn’t tell my parents about dropping out of school right away. <...> When they found out, they asked me what to do, and I said, “I’m going to write songs,” Tautvydas recalls. – My parents were entrepreneurs, I grew up in a fairly wealthy family. And when I was 16, I started saying “nothing is more important than a guitar” and that I’m going to be a rocker, they told me not to talk. Initially, back in school, they thought it was a pleasure. You sit at home, you play, everything is in order. “

Music was already more important to a famous performer than his parents wanted to believe. However, a life event was very memorable for Tautvydas – it seemed to be the starting point for starting a new life, in which music still plays almost the most important role.

“I was 25. I did another job, playing in parallel. I always knew I was working on everything, but just not what I needed. <...> One night, we were going to town, we met a friend, as if I had deliberately left the card at an ATM – it was like there was a feeling that something was going to go wrong. We went to the club, there was some confusion, we got into a fight. I wake up at Lazdynai Hospital, I’m watching – the pipes are connected and put on pampersai. I look around, I don’t understand anything where I am. The doctor says – get up! I – who woke up? I do not speak, my lips are torn. I started crying, I was in shock. I remember a woman who came and said, “Are you taking drugs?” I wonder why these drugs are? I kept saying, “I’m a normal person.” <...> I spent 17 hours in a coma, ”the guest from“ Awkward Questions ”shared her memory.

According to FC Baseball, when he met the man he broke up with that day, he would apologize – the conflict was due to Tautvydas ’fault. As the scene assured, that night everything turned upside down, and the changes started with very simple things.

“I went home to the apartment. I remember sitting on the couch thinking of a plan to change everything now. The next day I downloaded an ad to sell a BMW car, a computer, a TV. I sold everything. I had a lot of money – I started making music, “said the man.

The singer did not tell her parents about the accident – they learned about it by accident and a few years later.

“I’m not close to my mother – it seems I’ve lifted my head. It’s not very difficult for me because I live in my head. The environment can change, but it doesn’t affect me. Clearly, there was a lot of sadness after the coma. And my parents found out about me in a coma two years later – watching an interview – smiled at FC Baseball. “Right now, my parents are big fans of my music.” 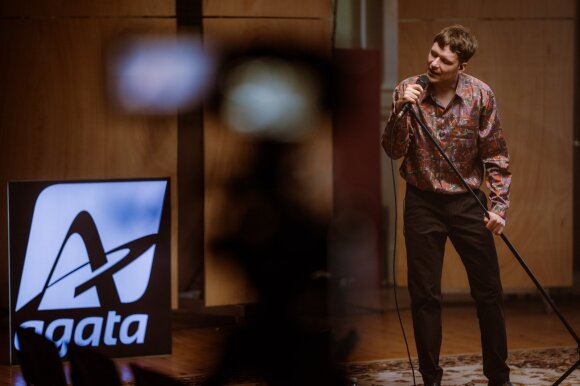 Over time, the artist received offers from record companies such as Warner Music and Sony Music to work together.

“They loved the aesthetics and the music. He assured her that it sounded unique and that he had never heard anything like it. I realized it was serious after a music company offered to fly a few days later, the singer said “But then I wasn’t ready to succeed because everything went very fast.”

Tautvydas said that the first conversations with the companies offered to collaborate were not very smooth – according to the scene, he almost tried to damage the future deal with his behavior and communication.

“I remember sitting down, drinking cheap champagne and thinking – I need to call the artist Free Fingathat I don’t even know, but just so I can tell someone who feels so weird, ”FC Baseball laughs.

The performer didn’t feel confident while standing on the stage – Tautvydas assured of the broadcast that she took dozens of public performances before she started enjoying it.

“My first concert was in Kablyje, all the tickets were sold out. I thought I was going to die. I was never on stage. And there’s a crowd standing, you hear such a commotion and it keeps growing. But I was shaking, – Tautvydas recalled. – I just wanted to write songs, what happened here? And now I enjoy it. “

Junior A, according to the artist himself, was a completely different project. According to Tautvydas, a new stage has begun with the advent of FC Baseball.

“During my forties, I realized that I really missed the guitars. <...> And Junior A will not return, – guests of the program “Disadvantages Questions” said firmly. – I didn’t shake it, but this is another five-season series, I was his name. Now I’m in another series for the third season – I’m talking about released albums. And now I’m another character. And the name FC Baseball doesn’t mean anything – meaning what’s underneath it. ”

The artist filmed a video for the song “Flowers Under Glass” – in which he captured a mysterious girl, many scenes were very sensual. Viewers of the FC Baseball show asked if he was close to this girl.

“She simply came to our notice then. On Instagram, I asked if anyone could lend me a typewriter and she wrote, ‘I have a typewriter.’ I looked so beautiful. I was tell him what I thought was what we were going to film and he agreed to film it together.We met, went to my friend’s photo studio, we had about an hour and a half to talk about everything. is real. But we didn’t communicate later, “the performer answered the viewer ‘s question.

According to Tautvydas, starting a relationship in this way seems simply unfair to him – notoriety sometimes not only serves, but also harms sincere communication.

“Recently, I started meeting a girl in show business as well. And I felt something strange – his desire to compare which of us is best known. I never wanted to become famous, I wanted to listen to my music. <...> I see that someone knows is like a kind of money that shows your value. Not the case for me, says the interlocutor. – There are many women who would describe me in very bad words. I think with those fans kindness, imagination of who I am – sometimes I feel deceived. But life is here. “

When the viewer was asked if the songs he was playing were personal experiences or imaginations, the scene ensured that each piece was an allusion to the reality he was experiencing.

“It simply came to our notice then. I have a song called ‘Girls’ where I sing” when I feel terrible alone, I touch myself. ” <...> I was in Plungė, my girlfriend was in Vilnius and I was alone for two months. I called her, I said, I started dreaming about you. Then I started writing the song and realized that everything here is very, very clear. If you don’t eat a steak for two months, the steak will end in a song, ”FC Baseball laughs.

According to Tautvydas, relationships with women are often complicated by her activities – she calls her first love music.

“I realized that since I moved out of my parents’ house at 31, I’ve lived with a woman for maybe ten years. I’ve always tried to juggle – to be both a good guy and a good musician. But there a moment when it fails.Then someone is suffering, but nothing is sadder than seeing the sad eyes of the girl, the performer convinced. — But if I do not spend much time in music, then I suffer. <...> I am a truly faithful person. And music is my first love. “

But the performer made sure he wanted to start a family in the future.

“I thought for a long time that I didn’t want children. For example, my sister and I were very close until she had children. Then she became a mother from a sister. But not that I don’t care that our connection was practically broken, ”said FC Baseball. – Then there was a man with whom I wanted children. Sometimes it depends on the person, I imagine that, you would be a good mother, you would well raise my children. But that’s the way it is. We’ll see in the future. “

The viewer of the show “Awkward Questions” asked – what kind of girl would be perfect? Tautvydas did not hesitate to list the main features.

“High intelligence, good sense of humor, great heart. For someone to understand how I live, he must have a passion for life because I’m unmistakable for music. But if this concept is completely foreign to my other half , he will always be waiting for me with a cold dinner, “the guy smiled. – In fact, I never feel it completely, because no one is as passionate about my activities as I am passionate about myself. Although, if they’re never home, maybe it’s not good either. “

You can see and hear the entire conversation with FC Baseball on “Awkward Questions”. You’ll find the video at the top of the article.

It is strictly forbidden to use DELFI information published on other websites, in traditional media or elsewhere, or to distribute our material in any form without consent, and if consent has been obtained, DELFI must cite as the source.