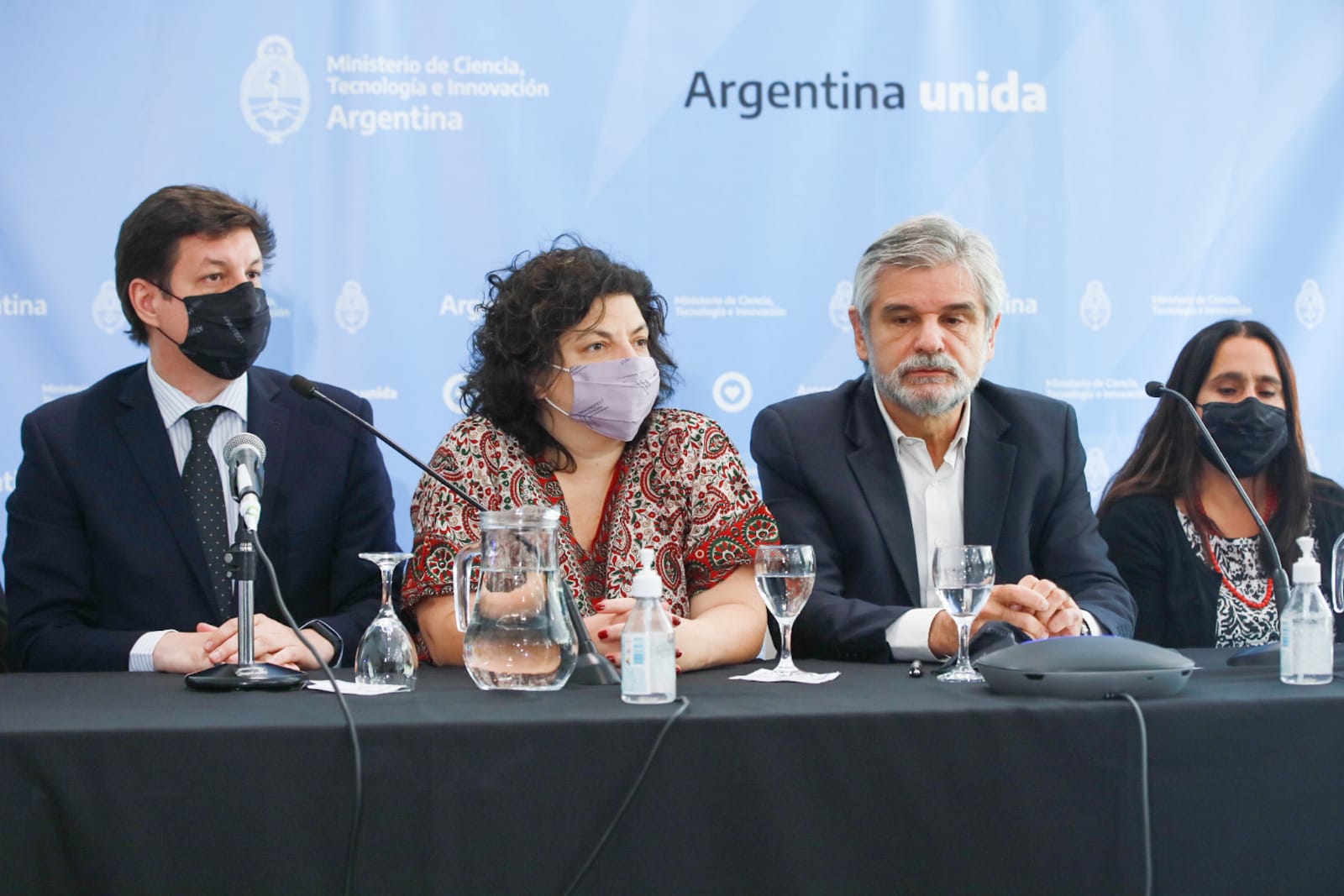 The Minister of Science, Technology and Innovation, Daniel Filmus, and his Health counterpart, Carla Vizzotti, announced the start of clinical safety trials of the Argentine vaccine in people ARVAC Cecilia Grierson. They were accompanied by the researcher and development leader, Juliana Cassataro; the rector of the National University of San Martin (UNSAM), Carlos Grecco, and the head of the Cassará Laboratory, Jorge Cassará. The vaccine against COVID-19 developed in Argentina by researchers from UNSAM and CONICET in conjunction with the Pablo Cassará Foundation and the Cassará Laboratory, will begin Phase I in humans to evaluate the safety, tolerability and immunogenicity of the protein vaccine recombinant, assays authorized by the National Administration of Medicines, Food and Medical Technology (ANMAT) through provision number 2182/22. It should be noted that these trials are necessary to advance the goal of making the ARVAC Cecilia Grierson vaccine available as a booster to current vaccines.

Filmus and Cassataro during the announcement.

During the conference, Filmus stated: “The objective is to announce that ANMAT has approved the beginning of Phase I of studies of the vaccine that is dedicated to COVID-19, and is supported by three Ministries, of Science; Health, and Productive Development. It is a pride for Argentine science to have a national vaccine made by our scientists and what it means to bring research and development to the service of people. Before the end of the year we expect a fully developed vaccine in the country to serve our population.”

In his turn, Vizzotti pointed out that “it is a job that required a lot of time, a lot of articulation, and that it is part of this synergy that we have been carrying out with great pride and at the instruction of the President”, and also highlighted the joint work carried out with the Ministry of Science, Technology and Innovation; Productive Development; CONICET; the National Agency for the Promotion of Research, Technological Development and Innovation; the universities; and the pharmaceutical industry. In this sense, he considered that advancing in Phase 1 of the ARVAC Cecilia Grierson vaccine means “a historic moment” in relation to research and development in Argentina. “It is a fundamental basis for what comes in the future, whether it is other COVID vaccines, or any other vaccine, medicine or technological innovation,” explained the minister, who stressed the support and strategic view of the State in this initiative that may have “Impact not only for the Argentine population, but also to export to the entire region.”

For his part, the head of the National Agency for the Promotion of Research, Technological Development and Innovation (R+D+i Agency), Fernando Peirano, pointed out that “the project had the support of the Agency from its inception in the framework of the Coronavirus Unit. The capabilities of Argentine science have been translated into a vaccine. This not only gives us sovereignty over a key input, but also opens up economic and productive opportunities.”

The president of CONICET, Ana Franchi, expressed her satisfaction with this important advance and explained: “We are very happy that an Argentine development, of a CONICET researcher at UNSAM, with a large group, has reached this stage, to begin phase 1 of a booster vaccine against COVID. It shows the importance and value of our researchers and the quality of our science. And on the other hand, the joint effort of the three national ministries, together with CONICET, the Cassará laboratory , UNSAM and various actors, to carry out this project and make it a reality. We hope that in a short time it will be available to all of our compatriots.”

The President of CONICET, Ana Franchi; the President of the I+D+i Agency, Fernando Peirano; the Undersecretary of Knowledge Economy of the Ministry of Productive Development, María Apólito, and the director of the Argentine Sectorial Fund (FONARSEC) of the R&D Agency, Laura Toledo.

Fase I. 80 healthy volunteers will participate who have already received a complete previous vaccination schedule and who, if it is found that they meet all the criteria established by protocol (eligibility criteria), will receive a booster schedule of the vaccine under study. To carry out studies in humans, it will be carried out in CABA in a center specially authorized by the ANMAT and whose Principal Investigator is the pediatric infectologist, Dr. Gustavo Yerino.

The doctor in Biological Sciences, CONICET researcher, Juliana Cassataro, who directs the Laboratory of Immunology, infectious diseases and vaccine development of the Biotechnological Research Institute (IIB-UNSAM) and leads the group of researchers developing the vaccine, explained: “Given that in Argentina most of the population is vaccinated, we are currently focused on the prototype of the booster vaccine and change of variant. In December 2021, we finished the preclinical studies, that is, in ‘non-humans’, finding that our vaccine prototype, in addition to being safe, induces neutralizing antibodies against the variants that circulate in our country, as well as a T cell response and protection against the challenge experimental with SARS-CoV-2. Due to these promising results, the ANMAT has allowed us to move forward with studies in humans”. It should be noted that the preclinical studies were financed by the R+D+i Agency (within the framework of a FONARSEC project) dependent on the Ministry of Science, Technology and Innovation, while the development and industrial scaling of the biotechnological process under GMP quality standards , as well as the Phase I clinical study, are financed by the Pablo Cassará Laboratory.

“Before industrial production, there are several stages that must be completed: Phase I, which begins now, and whose main objective is to verify the safety of the vaccine, and then phases II and III, which are intended to evaluate not only the safety but also the immunogenicity of the vaccine and that it will include a much larger number of volunteers. This entire process is carried out under the supervision and approval of the ANMAT, which is the regulatory body for all research studies in clinical pharmacology. We are working to carry out these trials and present the results for evaluation as soon as possible”, added Cassataro.

Vaccine with national seal under public-private articulation. There are currently six COVID-19 vaccine projects designed in Argentina, five of which have financing from the Argentine State; The first to carry out Phase I trials is the “Arvac-Cecilia Grierson” vaccine (UNSAM/CONICET-Cassará), which began its development in June 2020.

“This is the first time that a preventive vaccine designed in an Argentine public university has been able to carry out Phase I trials. It is a milestone for the entire public science and technology system,” said Cassataro.

About the “Arvac-Cecilia Grierson” vaccine. It is based on recombinant proteins, a safe technology that has already been applied in vaccines against Hepatitis B for more than 20 years or, more recently, HPV. It is a technology that has proven to be very safe and robust, and that allows the development of vaccines that are stored between 2 and 8°C (refrigerator temperature). These characteristics could allow the doses of the ARVAC Cecilia Grierson, unlike the first vaccines against COVID-19, to be cheaper, easier to produce and distribute.

“She had lost a lot of blood”

This was the goal of the month in the Premier League