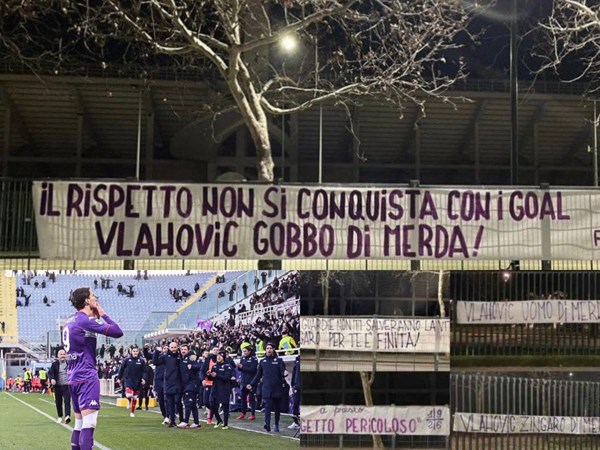 The Italian police opened an investigation, after the Serbian Dusan Vlahovic, the Fiorentina striker, received death threats, to prevent him from moving to Juventus, but the deal has reached its final stages, and it will be announced on Saturday after the two clubs’ agreement.
Italian police in the Frenzi region were present in front of the home of Serbian striker Dusan Vlahovic, who received threats from Fiorentina fans, after reports that he had moved to Juventus.
And the Italian media monitored insulting banners threatening the life of the 21-year-old Serbian international Vlahovic, in response to his departure to Juve, especially as he shares the top scorer in the Italian Football League this season with Lazio striker Ciro Immobile, with 17 goals each.
Fiorentina fans hung banners on the fence of the Artemio Franchi stadium and wrote in one of the banners: “Your guards will not save your life, you are done.”
The fans are angry, because Juventus kidnaps the best talents of the team, and in 1990, their star Roberto Baggio moved to Juve, which resulted in demonstrations in the streets, and Federico Chiesa, the star of the Italian national team winning the “Euro 2020” title, moved recently, on loan to Juve, on the condition that the deal be permanent.
Firenze Mayor Dario Nardella said: “I am humiliated to see Vlahovic move to a direct opponent, and this is just another symptom of football being further and further away from the fans, led by characters who should not have all this power.”
Fiorentina announced in October that Vlahovic refused to extend his contract, which ends in June 2023, and the striker won the award for the best young player last year in Italy, after scoring 21 goals and equaling Cristiano Ronaldo’s number (33 goals), as the most scored in the Italian League in one year.
And “Sky Sport Italia” reported that Juventus and Fiorentina had reached a final agreement regarding the transfer of Vlahovic to Turin, in exchange for 75 million euros, and the player agreed to the terms of his contract with Juventus, and he would receive 7 million euros annually with “Juve”.

How to free up space on your cell phone so that WhatsApp does not leave you without memory?